Syracuse, N.Y. — The Everson Museum of Art’s decision to auction off a painting by Jackson Pollock is “inexcusable,” according to a scathing new column from The Los Angeles Times. Pulitzer Prize-winning art critic Christopher Knight called out the Syracuse museum Monday for sending Pollock’s 1946 “Red Composition” to […]

Syracuse, N.Y. — The Everson Museum of Art’s decision to auction off a painting by Jackson Pollock is “inexcusable,” according to a scathing new column from The Los Angeles Times.

Pulitzer Prize-winning art critic Christopher Knight called out the Syracuse museum Monday for sending Pollock’s 1946 “Red Composition” to the auction block. He especially took issue with the timing of the announcement, the speed of the sale — scheduled for Oct. 6 at Christie’s in New York City — and the likelihood that a groundbreaking, influential piece of art available for public view would soon end up in a private owner’s hands.

“…[I]t was obvious that museum officials were worried — and maybe more than a little embarrassed — by the inexcusable move they were about to make,” Knight wrote in the Times. “Like naughty children hoping the grown-ups wouldn’t notice tiny hands dipping into the cookie jar, they dropped the stunning press release into the media black hole that is Labor Day weekend.”

The Everson announced on Thursday, Sept. 3, that it would auction off the painting to help diversify its collection and acquire works created by artists of color, women artists, and other under-represented creators. A press release said the Board of Trustees of the Everson Museum of Art voted unanimously to sell the painting with the blessing of The Dorothy and Marshall M. Reisman Foundation; the Reismans, both deceased, donated it to the museum in 1991.

“As a longtime board member and benefactor of the Everson, Marshall would have been extremely happy to see his gift used for the greater good of the museum, its future sustainability, and its impact on the community,” said Robert Falter, Trustee of The Dorothy and Marshall M. Reisman Foundation.

“Red Composition” is estimated to be worth between $12 million and $18 million, a price too high for most museums to bid on, according to Knight.

“[N]ow the Pollock is likely to disappear into an unknown oligarch’s private estate or some freehold warehouse in Switzerland,” he lamented.

Everson Director Elizabeth Dunbar said funds from the sale will go towards conserving and restoring the museum’s existing works, as well as diversifying its collection with new pieces. Inspired by the death of George Floyd and other social injustices, the museum created an Equity Task Force, comprised of Everson Trustees, staff, and community stakeholders to discuss how to “fight… racism inside and outside our walls.”

“Now is the time for action,” Dunbar said. “By deaccessioning a single artwork, we can make enormous strides in building a collection that reflects the amazing diversity of our community and ensure that it remains accessible to all for generations to come.”

“Balderdash,” Knight responded. “The Everson would need to unload half of its collection for it to reflect the diversity of a city that is 45% nonwhite, according to the most recent census estimate.”

Knight also took issue with museums selling works from permanent collections, known as “deaccessioning,” in general. The Baltimore Museum of Art sold works by Andy Warhol and others in 2018, the San Francisco Museum of Modern Art auctioned off a $50 million Mark Rothko, and the Everson’s Pollock “marks a certifiable trend,” he wrote.

According to The Washington Post, the Association of Art Museum Directors has long pressured museums not to sell off art for any reason other than acquiring new art. For example, The Berkshire Museum in Pittsfield, Massachusetts, was censured and sanctioned for using the sale of more than 20 works to raise money for renovations.

However, the Post reports the AAMD temporarily relaxed its guidelines in the spring due to the coronavirus pandemic forcing museums to close, reduce admissions, or reckon with Covid-19 1/4 u2032s impact on fundraising and endowments. Museums may now “use the proceeds from deaccessioned works of art… to support the direct care” of their collection without facing penalties, though some critics in the art world may still turn up their noses.

Jessica Arb Danial, president of the Everson’s Board of Trustees, refused to be shamed by Knight.

“It’s easy to cast stones when you have nothing invested in Syracuse and our community,” Danial said in a statement to syracuse.com 5/8 The Post-Standard. “We realize that not everyone is going to agree with the bold nature of this move. Our actions are purposeful in order to create a different path forward for our city and the artists we represent. Our institution’s priorities and commitments are to diversifying works in the collection, an action we aspire to every day.”

Wed Sep 16 , 2020
OKLAHOMA CITY (KFOR) – The Museum of the Bible, physically located in Washington D.C., qualified for Oklahoma City’s limited CARES Act funds because their corporate office is located in Oklahoma City on the Hobby Lobby campus.  The CARES Act money was federal money given to Oklahoma City and was set […] 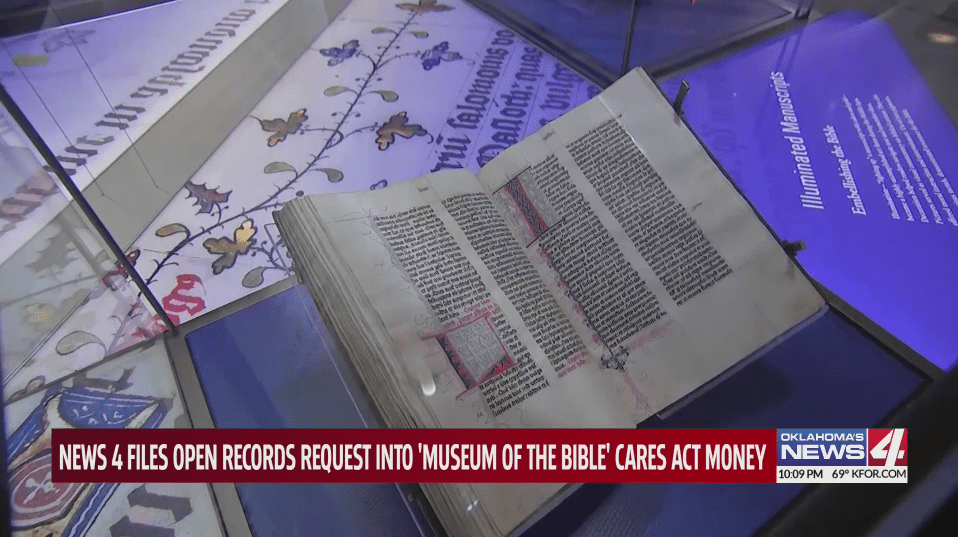