The City and Parish Councils on Thursday adopted the 2020-21 budget that provides $1 million for Lafayette Police de-escalation training and restores some funding for parks and recreation, the Cajundome and arts and science facilities. $1M to go toward Lafayette Police training in wake of Trayford Pellerin death, Josh Guillory […]

The City and Parish Councils on Thursday adopted the 2020-21 budget that provides $1 million for Lafayette Police de-escalation training and restores some funding for parks and recreation, the Cajundome and arts and science facilities.

The councils also stripped from the budget pay raises Mayor-President Josh Guillory proposed for some of his staff, including a $10,000 raise for his director of minority affairs, Carlos Harvin, increasing his salary to $60,000.

Success! An email has been sent with a link to confirm list signup.

Error! There was an error processing your request.

Among the funding restored to or allocated in the budget for the fiscal year that begins Nov. 1 are:

Both the City and Parish Councils voted unanimously to adopt the amended budget. Parish Councilman John Guilbeau was absent because of health reasons.

The City Council’s special attorney, Lea Anne Batson of Baton Rouge, was present at the meeting in the audience. She was hired this week to represent the City Council on budget and voting disputes with the administration and legal team.

City Council Chairman Pat Lewis, after the meeting, said the two council chairmen and Batson met with Council Clerk Veronica Williams and Assistant City-Parish Attorney Paul Escott prior to the meeting to work out how the meeting would be handled, especially to determine when only the City Council would vote on items and when both councils would vote.

The voting process worked, Lewis said, because Batson was there.

“It showed we needed her,” he said. “She has other great ideas on how to move forward.”

This was the first budget prepared by Guillory, who took office in January. Prepared during the early days of the COVID-19 pandemic, the budget was based on conservative projections for sales tax revenue, leading Guillory to impose drastic cuts, some of which were restored, at least partially, by the City Council when actual sales tax collections greatly outpaced Guillory’s projections.

It also was the first budget to go before separate City and Parish Councils, which came into being in January because of a 2018 home rule charter amendment voters approved to split the councils and give city of Lafayette residents their own council and better oversight of city taxes. Previously, a combined City-Parish Council legislated Lafayette Consolidated Government.

The budget that Guillory proposed in July cut funding to parks and recreation, the Heymann Performing Arts Center and golf courses, and reduced funding for the science museum, Acadiana Nature Station and an annual 2% pay raise for employees.

‘Pedal Through’ Highlights Black Joy and Healing on Two Wheels

Sun Sep 20 , 2020
This week in Women in the Mountains, we sat down with director and filmmaker Analise Cleopatra. Cleopatra co-directed the short film ‘Pedal Through’ which explores the strength and healing that comes from pushing yourself in the outdoors. Alisa Geiser photo. Even though her body was exhausted from her first day […] 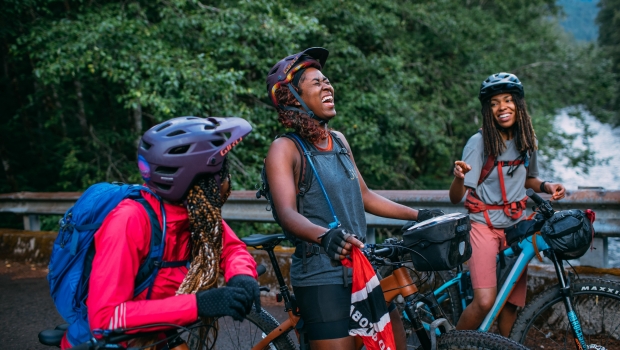