EXCLUSIVE: Following the success of SpaceX’s Crew Dragon mission, which marked the return of the U.S.’ capability for manned flights and the first private company to get people into orbit, a reality series wants to send a civilian into space. Space Hero Inc., a U.S.-based production company founded by Thomas […]

EXCLUSIVE: Following the success of SpaceX’s Crew Dragon mission, which marked the return of the U.S.’ capability for manned flights and the first private company to get people into orbit, a reality series wants to send a civilian into space.

Space Hero Inc., a U.S.-based production company founded by Thomas Reemer and Deborah Sass and led by former News Corp Europe chief Marty Pompadur, has secured a seat on a 2023 mission to the International Space Station. It will go to a contestant chosen through an unscripted show titled Space Hero. Produced by Ben Silverman and Howard Owens’ Propagate, the series will launch a global search for everyday people from any background who share a deep love for space exploration. They will be vying for the biggest prize ever awarded on TV.

The selected group of contestants will undergo extensive training and face challenges testing their physical, mental and emotional strength, qualities that are essential for an astronaut in space. I hear the idea is for the culmination of the competition to be in a an episode broadcast live around the world where viewers from different countries can vote for the contestant they want to see going to space. The show will then chronicle the winner’s takeoff; their stay at the ISS for 10 days alongside professional astronauts traveling at 17,000 mph, orbiting the Earth 16 times a day; and end with their return to Earth. The Space Hero company is currently in discussions with NASA for a potential partnership on STEM initiatives onboard the ISS.

The trip of the Space Hero winner will be on a SpaceX Dragon rocket. Space Hero, billed as the first space media company, is working with Axiom Space, manufacturer of the world’s first privately funded commercial space station — a module for the ISS where the private astronauts can stay — and full-service human spaceflight mission provider.

Led by Mike Suffredini who served as NASA’s International Space Station program manager for 10 years, Axiom handles all aspects of the Space Hero private astronaut mission, from brokering the trip to the ISS — currently earmarked for early 2023 — and securing the rocket seat to training the aspiring astronauts and insurance coverage.

The series will be taken out soon, with a global streaming platform and a broadcast partner in each country, including the U.S., explored as distribution options.

“We see the world changing in front of our eyes. In times like these we yearn to look up to people for the right reasons, so it’s time to look amongst ourselves to find the heroes that will inspire a bright future,” said Reemer, the project’s creator and founding partner, a software, e-commerce, gaming and digital distribution entrepreneur with extensive background in the music industry.

Space Hero could be traced back to 2008. While working on a girl band global talent search reality show, Reemer visited Moscow and met with Channel One CEO Konstantin Ernst, who brought up the idea for a reality series that would find through a casting search somebody who would be sent to the International Space Station. The two worked on the premise, which was ultimately shelved as the U.S. in 2009 announced the shutdown of NASA’s shuttle program, with the last flight taking place in 2011. Years later, Reemer and Sass, a seasoned entertainment tech industry executive, had teamed on a project together after getting to know each other over their work in the same area of music and tech convergence.

“When 2015 came, it became clear that there would be more than just one rocket company available,” Reemer said. “At that moment it was only the Russians flying to the ISS, but in 2015 SpaceX and Boeing were gearing up to bring people back to the ISS from the United States as well, and so it became clear that there will be access capacity for those tickets. I talked to Debs about it and she said, why don’t you bring the show back again?” The two partnered to do just that.

Looking back at that time, Space Hero founding partner and co-CEO Sass said, “When Thomas and I started this venture, we were very clear that there was nothing like it on the planet. Today we have started our mission to find our distribution partner and are ready to take it to the next stage and get the world excited about Space Hero.”

Over the past five years, the duo’s Space Hero Inc. has grown to 36 team members, led by chairman Pompadur, who has more than 50 years of experience in the media and entertainment industry.

“Space Hero is the new frontier for the entertainment sector, offering the first-ever truly off-planet experience. We aim to reinvent the reality TV category by creating a multi-channel experience that offers the biggest prize ever, to the biggest audience possible,” Pompadur said. “Space Hero is about opening space up to everyone – not only to astronauts and billionaires.”

Reemer and Sass had met with several major reality TV company before they were put in touch with Propagate’s Silverman and Owens six months ago.

“When we did talk to them for the first time, it was a match made in heaven,” Reemer said. Within a week, the two companies had entered negotiations on a deal to partner on the project.

“We’re so excited to go on this extraordinary journey with this ambitious global team,” said Propagate co-CEOs Owens and Silverman, who had been pondering a space show for a long time. “There’s never been a more important time to look beyond ourselves and reach for the skies above. This could be not only the biggest but the most important show in the history of the television and we are thrilled to be involved.”

As president of the National Geographic Channel, Owens did, in collaboration with NASA, Live from Space, a live two-hour TV special from the ISS.

There have been a slew of attempts — all unsuccessful — over the past two decades to launch a reality series that sends civilians into space. Mark Burnett, who was not among the producers Reemer and Sass met with, has tried several times. The original incarnation, Destination: Mir for NBC, was renamed Destination: Space after the Mir space station was brought down by Russia, and the ISS was brought on board. Burnett’s follow-up effort, NBC’s Space Race, a partnership with Richard Branson’s Virgin Galactic, was put on ice after a fatal crash during testing of Virgin Galactic’s SpaceShipTwo spacecraft.

Other previously announced TV projects that did not take flight include Sony Pictures TV’s Milky Way Mission, which was to send celebrities into space in partnership with Netherlands-based Space Expedition Corporation. And Lionsgate TV teamed with Dutch billionaire entrepreneur Bas Lansdorp’s Mars One for an unscripted TV series chronicling the mission of a group that was to be trained and sent on a one-way trip to Mars to establish the first human colony.

A different time and a different approach is what separates Space Hero from other space-themed reality TV projects, Reemer and Sass said.

“There’s three reasons why we believe this show will work,” Sass said. “One is, the technology is far more advanced now than it was 20 years ago. You really truly can have a global audience watching the same thing at the same time in their own native language. That didn’t happen 20 years ago. Secondly, we have been very strategic and methodical in making the space industry our stakeholders. And the third reason is we’re not a Mark Burnett, a Simon Fuller or Simon Cowell. We are not seasoned professional producers. What we are is entrepreneurs, and we have very varied backgrounds.”

Indeed, with the Space Hero project, the TV show was the final element that came after Reeman and Sass had spent years putting together an infrastructure, establishing key partnerships to secure a seat on a ship to space. In November, it will be be two years since the duo went to an event in Luxembourg where they met people from NASA, Boeing, Deloitte and McKenzie and Lockheed Martin and presented their concept. Over the last 22 months they have traveled the world, talking to virtually all of the 72 space agencies in the world who have capabilities to send people into space. They have been to Russia, traveling to to Siberia to watch a Roscosmos rocket launch, as well as the Middle East and Asia. They have also crisscrossed America many times, from Washington to Johnson Space Center in Houston to Kennedy Space Center in Florida.

“The journey has been amazing, and may it continue,” Sass said.

Sally drenches US southeast after hitting Gulf Coast as hurricane

Thu Sep 17 , 2020
Tropical Storm Sally has downed trees, flooded streets and homes and knocked out power, reportedly killing one person, as it pounded the US southeast with torrential rain. The storm made landfall Wednesday morning near Gulf Shores, Alabama along the border with Florida as a Category 2 hurricane. Slow-moving Sally, which […] 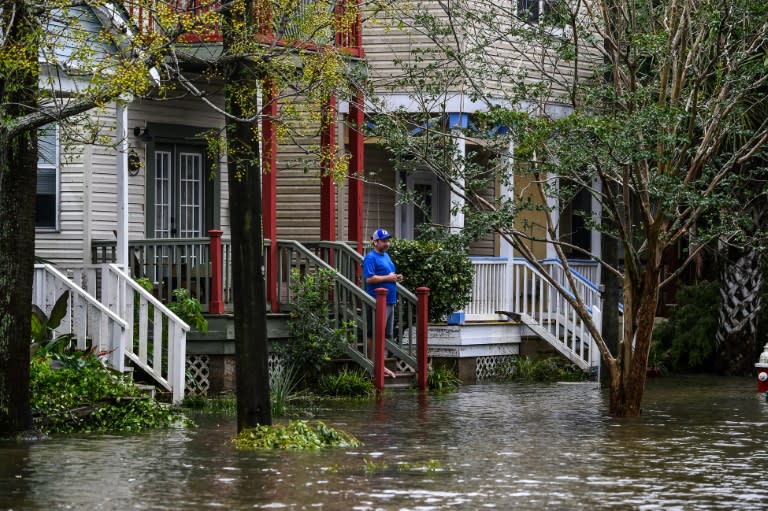