My screening companion ditched me about 15 minutes into Tomm Moore and Ross Stewart’s “Wolfwalkers,” a captivating animated feature that turned out to be one of the highlights of my 2020 Toronto International Film Festival. Not hers, though. What can I say? One person’s treasure — in this case, a […]

My screening companion ditched me about 15 minutes into Tomm Moore and Ross Stewart’s “Wolfwalkers,” a captivating animated feature that turned out to be one of the highlights of my 2020 Toronto International Film Festival. Not hers, though. What can I say? One person’s treasure — in this case, a 17th century Irish fantasy about a plucky young girl and a pack of gorgeously shape-shifting wolves — can be another person’s terror. Here is where I should probably note that the screening venue was my living room, my companion is 4 years old and the movie — a thrilling reminder that hand-drawn animation needn’t be cute or cuddly — featured just a few too many crossbows, guns and lupine growls for her taste.


For those of us watching from afar, this year’s festival — kids or no kids, wolves or no wolves — has been a TIFF like no other. In normal times, Toronto is a massive cultural and commercial undertaking that attracts thousands of moviegoers, journalists and industry professionals and, along with the Venice and Telluride film festivals, marks the official beginning of the fall movie season. But in the year of the COVID-19 pandemic, which has led festivals like Cannes, South by Southwest and Telluride to cancel, TIFF is one of the first major film events to take place against a dramatically altered landscape.

Like Venice, which concluded a successful 2020 edition just a week earlier, Toronto managed to pull it off with a slimmed-down program, reduced-capacity screenings and other safety protocols, including mandatory face coverings for all festivalgoers. (The latter requirement was only implemented, it should be noted, after much criticism of an initial “mask-optional” policy.) Like my other U.S.-based colleagues, I opted to cover the festival (not my face) from home, slipping on noise-canceling headphones and screening as many films as I could using TIFF’s handy digital cinema platform. A festival at your fingertips! How easy. Or so the logic went.


That kind of convenience, of course, comes at a price, especially in an artistic medium that always works best when it achieves your wholehearted surrender. And by surrender I mean actively putting aside your convenience, putting aside your phone, your work, your tiredness, your phone, your competing thoughts, your other appointments, your phone. I saw some very fine TIFF movies this year, though even the best ones left me wondering how much better I’d have liked them if I’d seen them as they were meant to be seen, on an enormous glowing screen in a crowded (and coronavirus-free) theater.

An optimal candidate for such an experience would be “David Byrne’s American Utopia,” Spike Lee’s electrifying film of the Byrne musical spectacular that premiered last year on Broadway. The movie (on HBO and HBO Max on Oct. 17), a spiritual successor to Jonathan Demme’s Talking Heads concert film classic “Stop Making Sense,” is the kind of experience that can lift your soul to the rafters. Or it should, anyway. Under different circumstances, it might have blown the roof off the Princess of Wales or one of the festival’s other flagship venues. Instead it premiered on the festival’s opening night at a drive-in, where I trust it played to a well-earned multitude of flashing headlights and honking horns.

A very different musical experience could be found in “The Disciple,” a contemplative, moving and bracingly unsentimental drama from the gifted Indian director Chaitanya Tamhane. It follows the artistic and spiritual journey of a young man (Aditya Modak) who longs to become a great singer, and who finds that his ambition may ultimately outstrip his talent. If you, like me, know nothing about Hindustani classical music and the lifelong devotion required to master its melodies, rhythms and nuances, you’ll come away from Tamhane’s film a bit wiser. You’ll also sink gratefully into a story whose insights into the rarity of success, the likelihood of failure and the eternal struggle between art and commerce ring true in any culture and language.


In a way, “The Disciple,” which will next play at the New York Film Festival on Sept. 29, brought me deeper into the peculiar mind-set of a film festival than any other Toronto movie I saw, partly because it touches, casually yet incisively, on some of the questions critics often ask themselves and each other when confronted with a sudden deluge of good, bad and mediocre art. Who are the brilliant new talents, the promising discoveries? What judgments of this year’s artists are being rendered, and who is rendering them? Will any of these works be of interest or relevance to the outside world, beyond a tiny, localized pocket of enthusiasts?

Not all of them will, of course, but some of them might. “The Disciple,” though likely to draw a limited audience in this country, has already made an excellent case for itself, armed with strong reviews and a screenplay prize from the jury of the Venice Film Festival, where it had its world premiere before heading to Toronto. Meanwhile, that Venice jury gave its top prize, the Golden Lion, to “Nomadland,” Chloé Zhao’s beautifully moving ode to American wanderlust, which Searchlight Pictures will release in December. Even in a year when the usual Oscar-season logic has been dramatically shaken up, “Nomadland” was instantly hailed in both Venice and Toronto as an obvious awards contender, especially for Zhao’s exquisite direction and Frances McDormand’s achingly great lead performance.

Zhao is only the sixth female director to win the Golden Lion in Venice’s 77-year history. Meanwhile, in an even more startling and frankly depressing milestone, Oscar-winning actor Regina King became the first Black female filmmaker ever to have a movie screen at the Venice festival, period. Her feature directing debut, the Amazon-acquired “One Night in Miami” (also at Toronto), is an expertly played talkfest, adapted by Kemp Powers from his stage play, that effectively shoves Muhammad Ali (then still known as Cassius Clay), Malcolm X, Jim Brown and Sam Cooke into a Florida hotel room in 1964, the night of Clay’s upset title win over Sonny Liston, and lets the conversational vibes flow until the verbal sparks begin to fly.


Her sharp timing and fluid blocking aside, King bears out the truism that actors are often especially good directors of other actors. Her approach pays particular dividends with Leslie Odom Jr. (“Hamilton”) as Cooke and Kingsley Ben-Adir as Malcolm X. Their furious arguments — the militant Malcolm sees the hugely successful Cooke as a white-pandering sellout, while Cooke believes that economic freedom is the only kind that matters — raise tough, unresolvable questions about the nature of Black progress, representation and liberation, then and now. They’re also another reason I wish I could’ve seen “One Night in Miami” in a theater; it’s the kind of movie you can feel an audience leaning into, choosing their favorites, sometimes switching allegiances and hanging on every word.

Another picture I wouldn’t have minded seeing with a crowd, at least for its breath-catching first half-hour: the Netflix-acquired “Pieces of a Woman,” a blistering melodrama from the Hungarian auteur Kornél Mundruczó (“White God”), making his English-language debut. Starring Vanessa Kirby and Shia LaBeouf as a Boston couple whose loving relationship threatens to be torn apart by grief, it begins with a series of lengthy, elaborately choreographed tracking shots that pretty much let you know what you’re in for: John Cassavetes’ emotional raggedness paired with Alejandro González Iñárritu’s visual showmanship. It’s not always the most intuitive or persuasive fit, but there’s no denying the watch-through-your-fingers intensity of that opening set piece, or Kirby’s shattering restraint in the kind of lead role she’s long had coming to her.

Kirby and McDormand figured heavily in the (way too) early guesses at who might be nominated for a lead actress Oscar next year, as did Kate Winslet for her remarkable work in “Ammonite,” Francis Lee’s emotionally acute drama of forbidden love. There were understandable raves, too, for Rosamund Pike in J Blakeson’s con-artist thriller “I Care a Lot,” in which she plays Marla Grayson, an icy schemer who’s turned legally sanctioned elder abuse into her own cottage industry, but who one day makes a startlingly ill-advised choice of targets. Watching the outrageous campaign of one-upmanship that ensued, I found myself flashing back on “Game of Thrones,” mainly because Pike’s scenes opposite Peter Dinklage generate real Cersei-Tyrion vibes. I also kept flashing back on “Gone Girl” and wondering whether Amy Dunne or Marla Grayson would prevail in a battle of the Pike powerhouses.


There were fine performances from male actors, too, notably Reid Miller, whose turn as a bullied gay teenager desperate for the acceptance of his father (Mark Wahlberg) was one of the few redeeming qualities of the redemption-peddling misfire “Good Joe Bell.” It’s never a surprise to note the continued excellence of Mads Mikkelsen, but I was particularly taken with his work in the unexpectedly lovely “Another Round,” a Danish day-drinking dramedy that reunites him with the director Thomas Vinterberg eight years after their Oscar-nominated “The Hunt.” Mikkelsen plays one of four longtime buddies, all high school teachers, who decide to overcome their various midlife slumps by giving new meaning to the term “high-functioning alcoholic.”

Drenched in sun, snow and Smirnoff, “Another Round,” which features an ending you’ll want to dance to, is ultimately a bittersweet affirmation of community. “New Order,” a political horror-thriller from the Mexican filmmaker Michel Franco (“Chronic”), might be described as the opposite. Opening with a nod to “The Godfather” — a lavish wedding where a man shows up requesting a favor — it swiftly devolves into the bloody chaos of a class uprising that plays out with sustained tension and unsparing violence, as well as some questionable political framing. A higher-art gloss on “The Purge,” for better or worse, “New Order” might remind you of some of last year’s haves.-vs.-have-nots parables like “Joker,” and not just because of Franco’s fondness for spattering his characters with red and green.

Like “Joker,” “New Order” won a major prize in Venice (coming in second only to “Nomadland”), and while it’s likely to intrigue only a fraction of that blockbuster’s audience, its reception among those who see it may be similarly polarizing. I myself cautiously look forward to seeing it again, hopefully on a bigger screen, in a darker room — and, needless to say, with no kids present.

Swimming with whales: you must know the risks and when it's best to keep your distance

Sun Sep 20 , 2020
(MENAFN – The Conversation) Three people were injured last month in separate humpback whale encounters off the Western Australia coast. The incidents happened during snorkelling tours on Ningaloo Reef when swimmers came too close to a mother and her calf. Swim encounters with humpback whales are relatively new in the […] 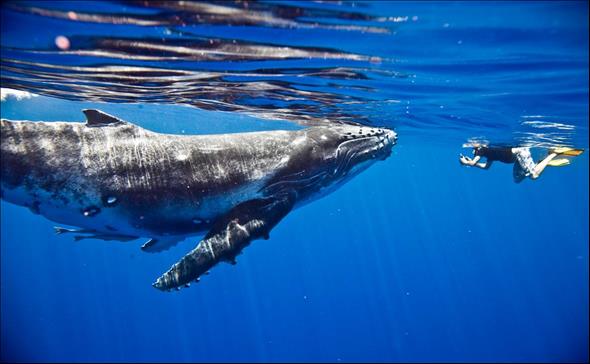