This small republic in the north of Russia is famous for its blue lakes, marble quarries and mountain forests filled with giant boulders. 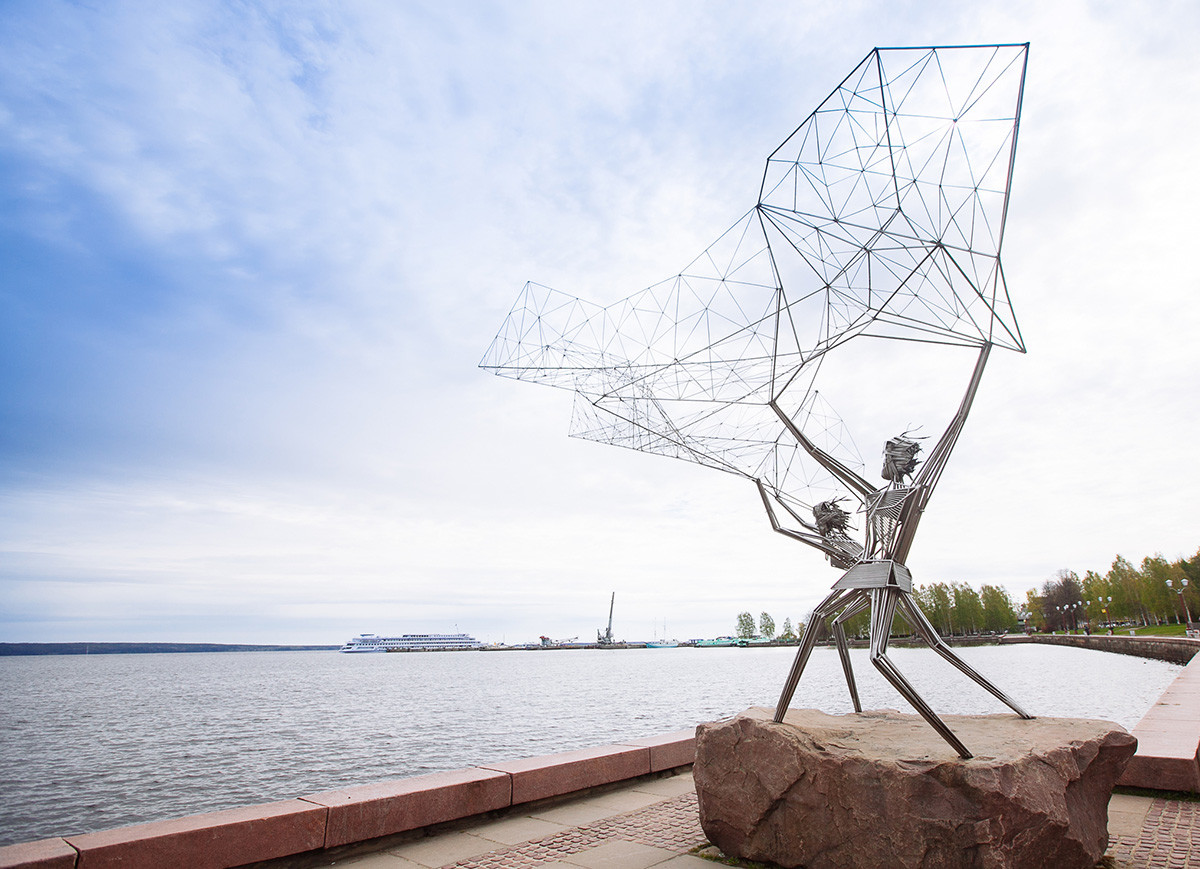 The capital and the largest city in Karelia (with just under 300,000 people living there) is famous for having one of the most remarkable waterfronts in Russia. Lake Onega’s embankment is decorated with installations by contemporary artists from all over the world. And the sunsets here are simply unbelievable! 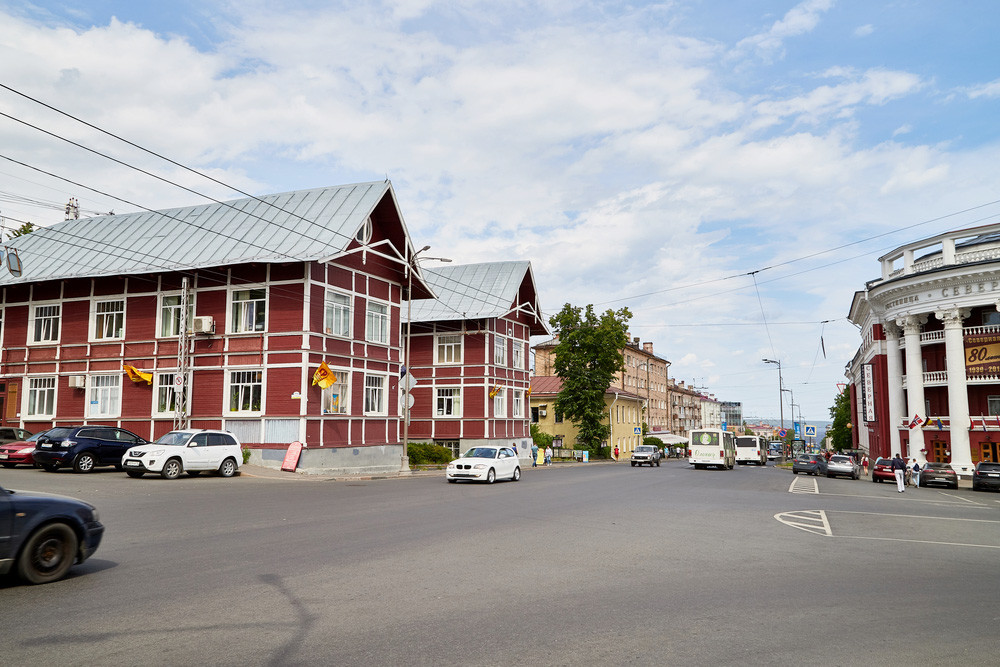 The main street in Petrozavodsk named after Lenin.

Architecture enthusiasts will fall in love with the old Karelian wooden houses in the city center, which is basically an open-air museum. 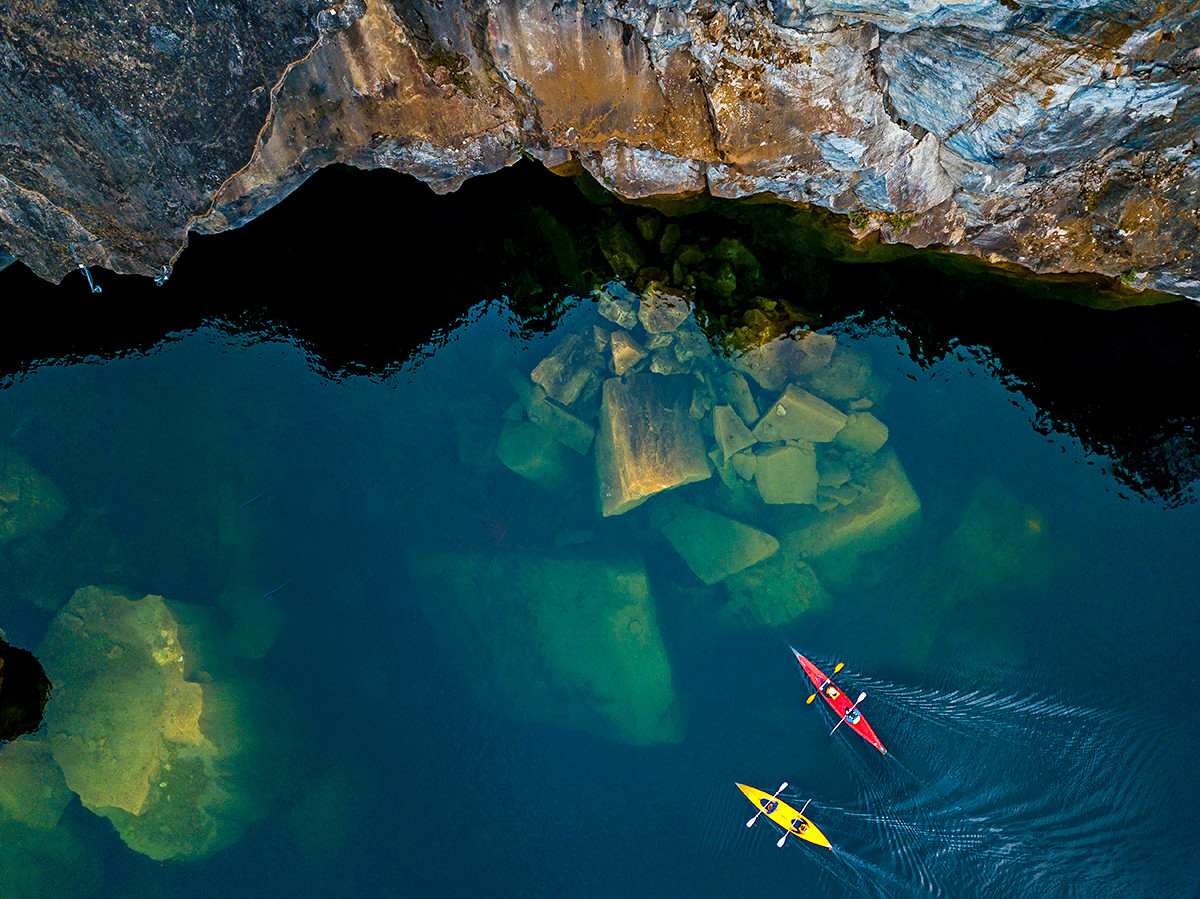 Several years ago, these abandoned marble quarries were turned into a park. Marble was mined here beginning in the 18th century. Ruskeala marble was used in the decoration of St. Isaac’s Cathedral and St. Michael’s Castle in St. Petersburg, as well as the city’s Primorskaya and Ladozhskaya metro stations. 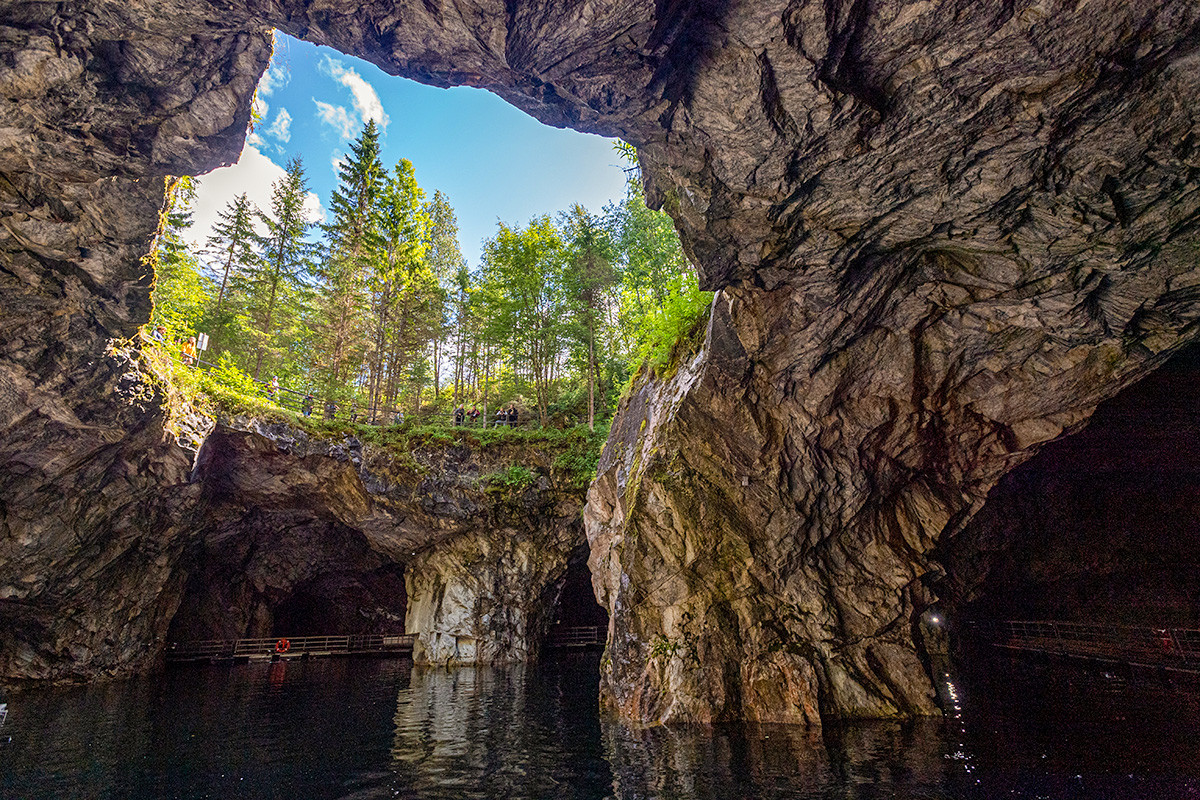 In the caves of the marble canyon in Ruskeala Mountain Park.

The main attraction at Ruskeala Park is a big canyon filled with blue water. You can also visit underground tunnels. 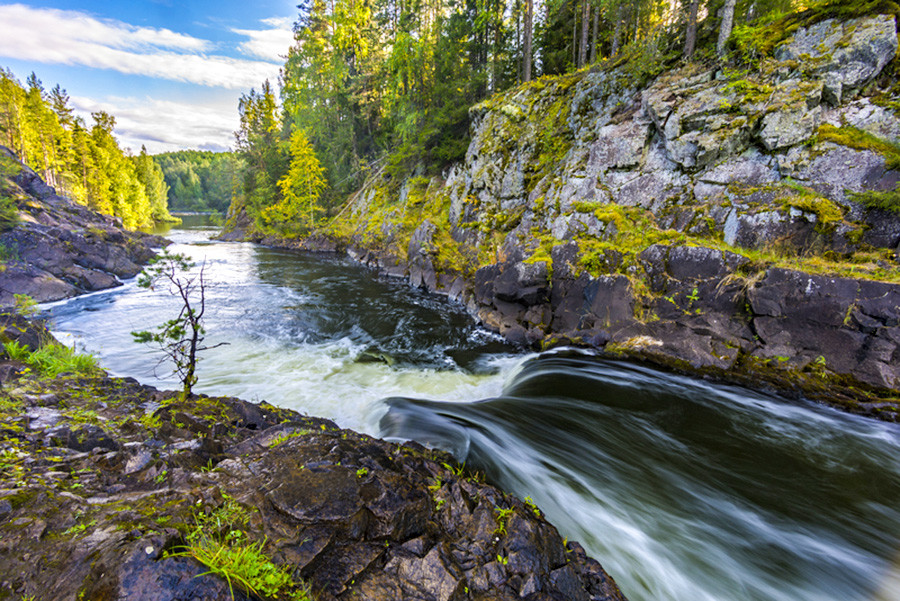 This waterfall features prominently in just about every tour of Karelia. It is impossible to miss! Kivach is translated from Finnish as “powerful, impetuous,” which is a very fitting description of this waterfall on the Suna River. At 10.7-meters high, Kivach is the second largest plain waterfall in Europe after Rhine Falls in Switzerland. 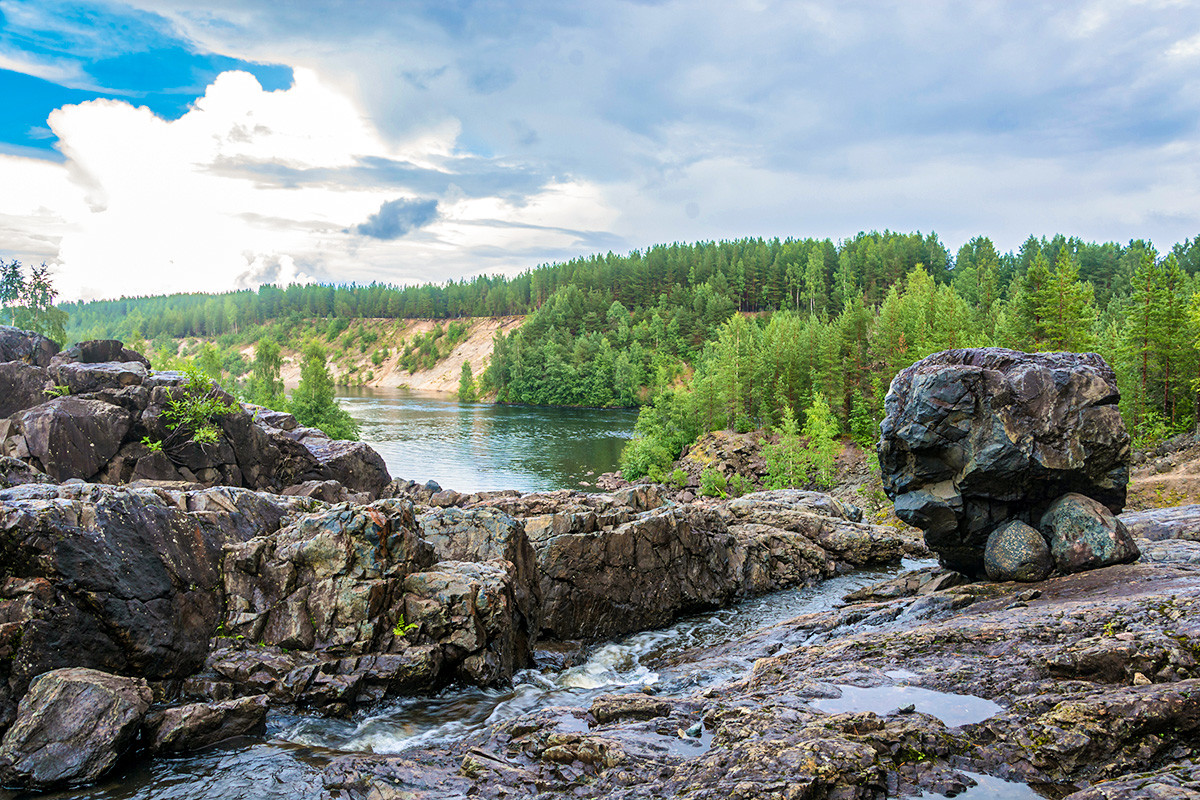 On an ancient volcano Girvas.

Girvas is not like any volcanoes we are used to. It looks like a rocky forest cut by numerous lakes and dams. But it is actually a volcano, or more precisely a paleo volcano, as scientists would say. It went extinct more than 2 billion years ago and is considered one of the oldest on the planet. 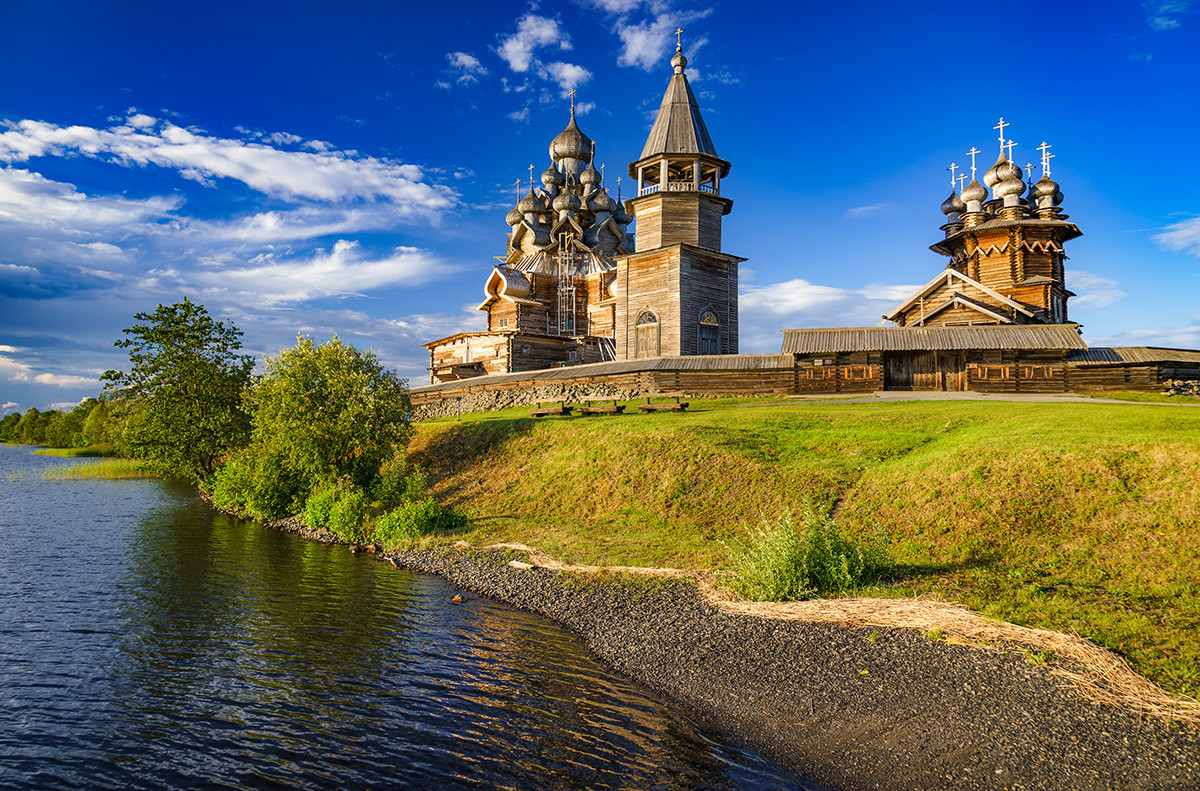 Lake Onega has more than 1,300 islands, but Kizhi is especially worth a visit. It is an island museum of wooden architecture and a UNESCO World Heritage Site. Medieval buildings were brought here from abandoned villages in northern Russian and restored. The heart of the ensemble is the Kizhi Pogost. 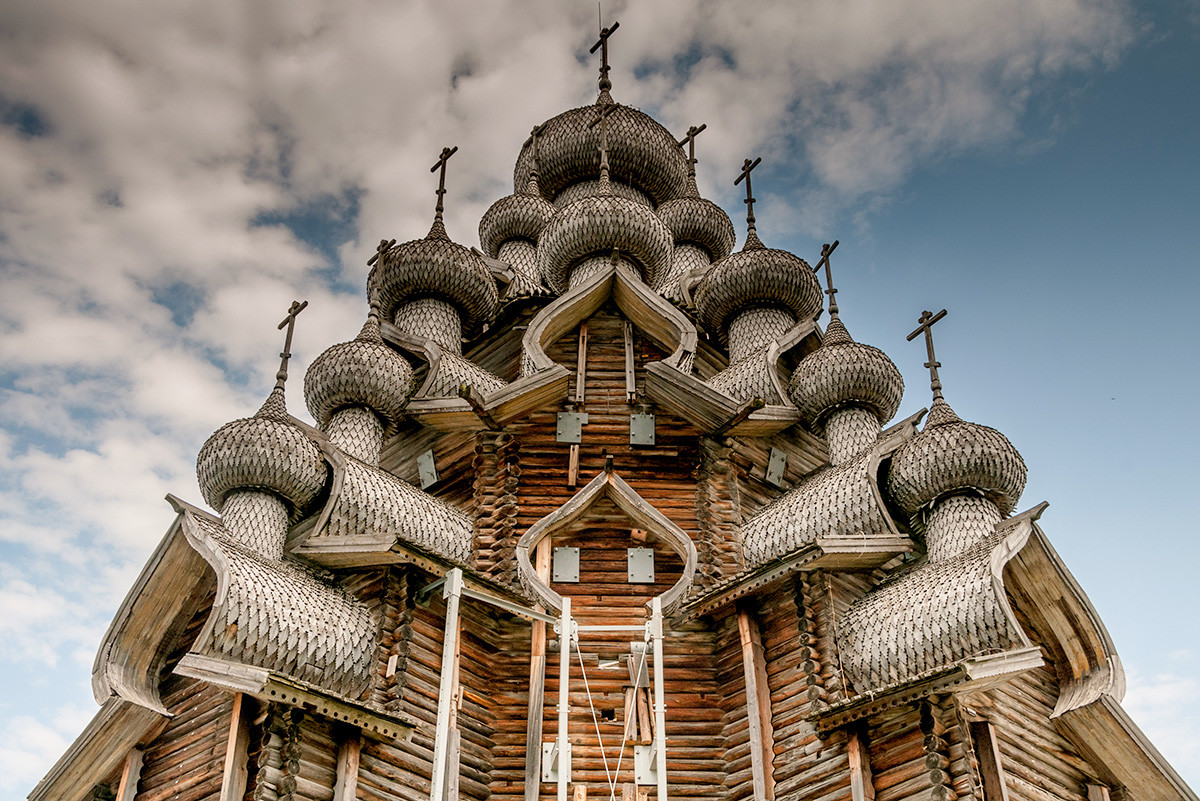 The Church of Transfiguration built 1714 on the Kizhi Island.

It consists of the 37-meter-tall Church of the Transfiguration, which was built in the early 18th century entirely from wood without a single nail. Here you will also find the Church of the Intercession, which has a partially preserved iconostasis and a 19th century bell tower. 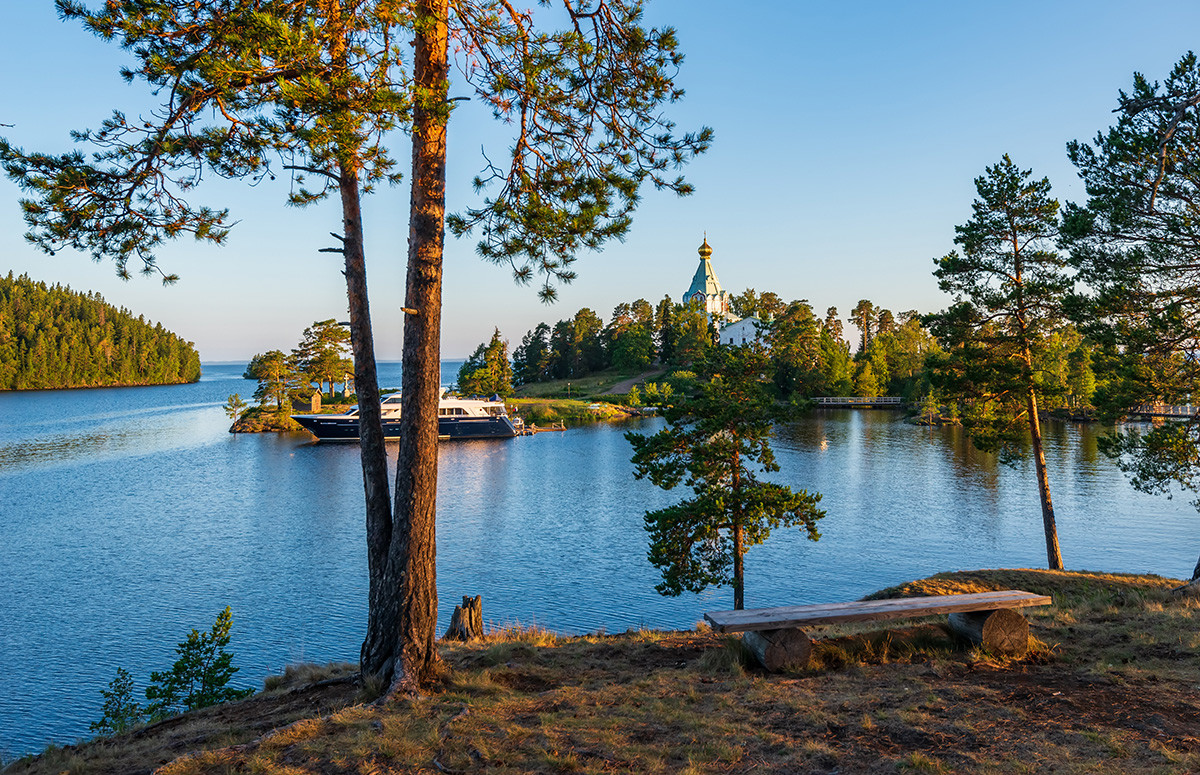 The bay of the Valaam Monastery and St. Nicholas Skete.

One of the oldest and most famous monasteries in Russia is located in the western part of Karelia on Lake Ladoga. The Monastery of the Transfiguration of the Saviour was founded in the 11th-12th centuries on the secluded Valaam Archipelago, which consists of 50 islands. Some of them are so close to each other that they seem like a single piece of land, while others are more remote and difficult to get to. On many of those islands, you can find secluded dwellings for monks that are called sketes. 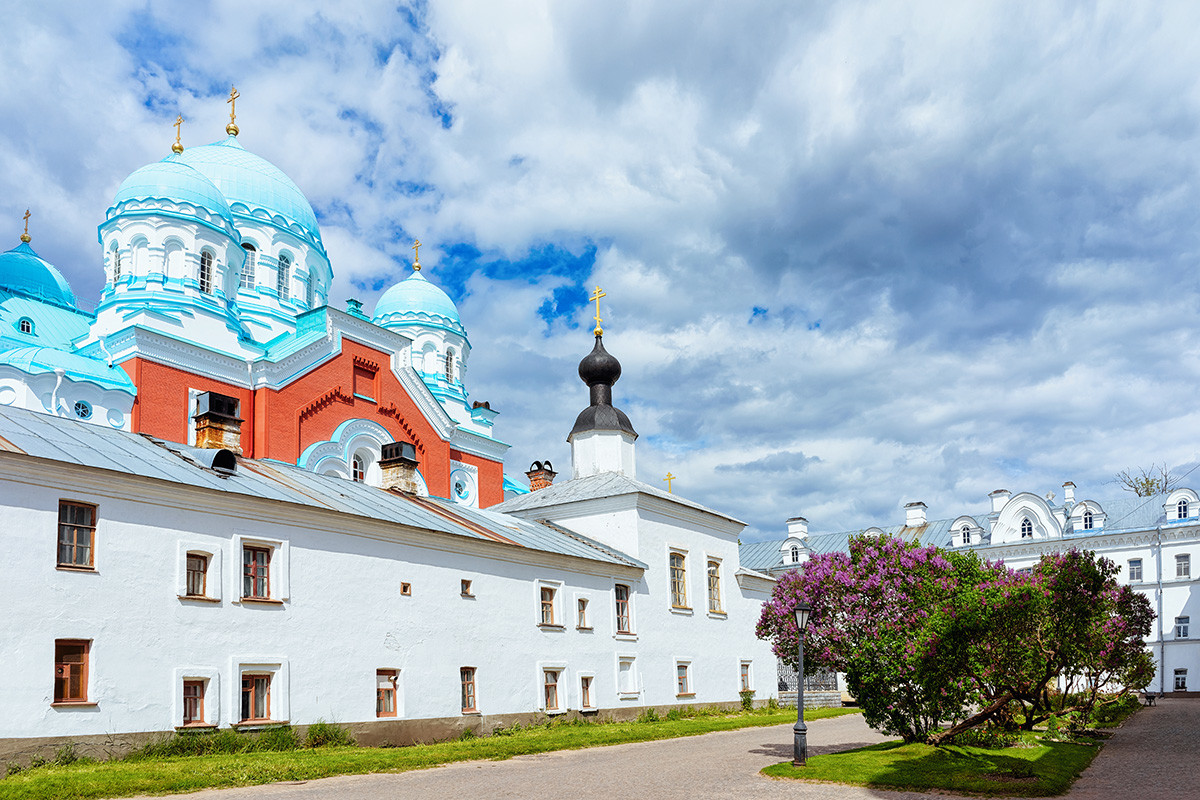 Pilgrims and tourists come here not just because of the monastery’s religious history, but also to go on scenic walks around the islands. 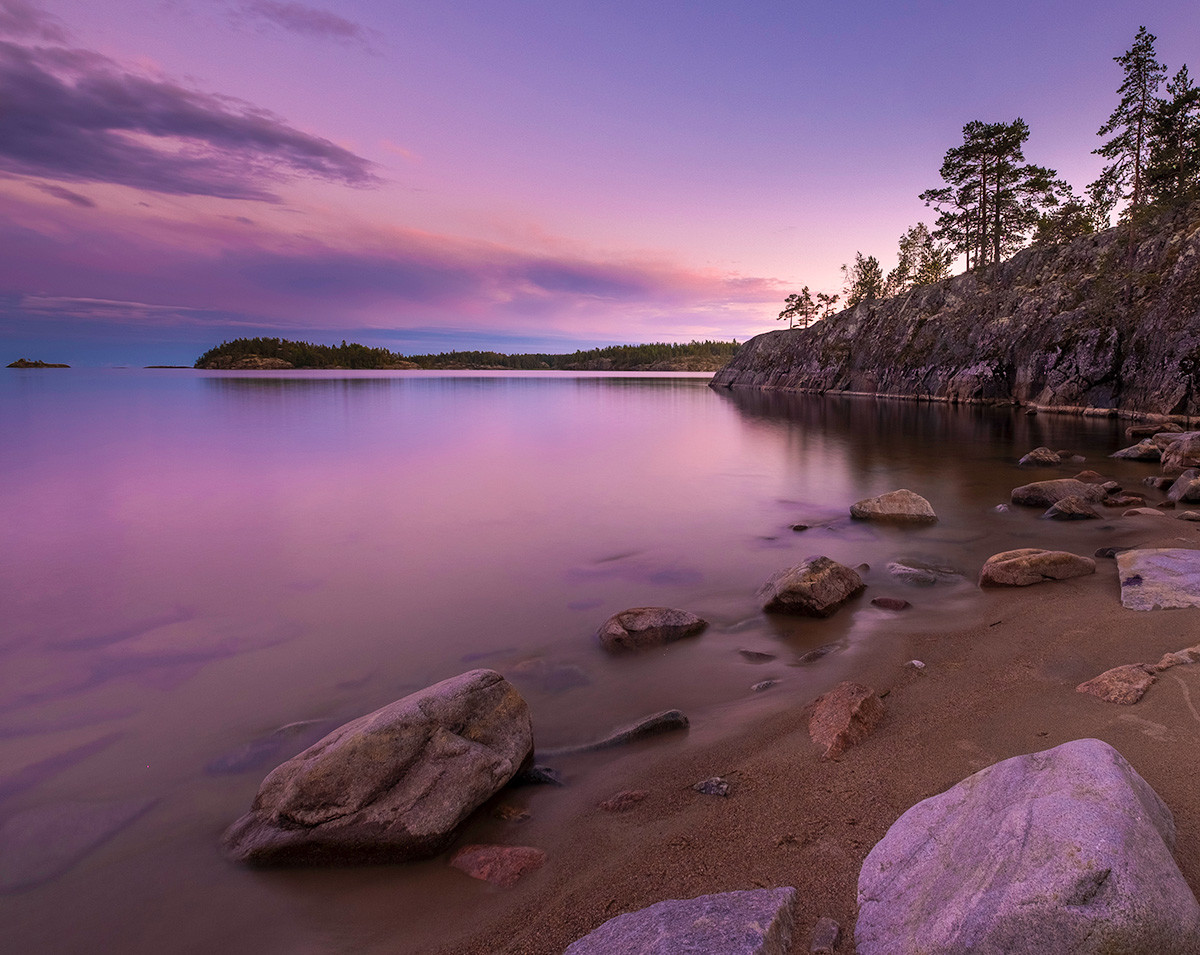 Summer evening at the Ladoga Lake.

One of the most beautiful national parks in Russia consists of hundreds of islands, canals and bays hidden away in the dense Karelian forests. It is one of the most popular fishing and kayaking destinations for tourists and locals alike. 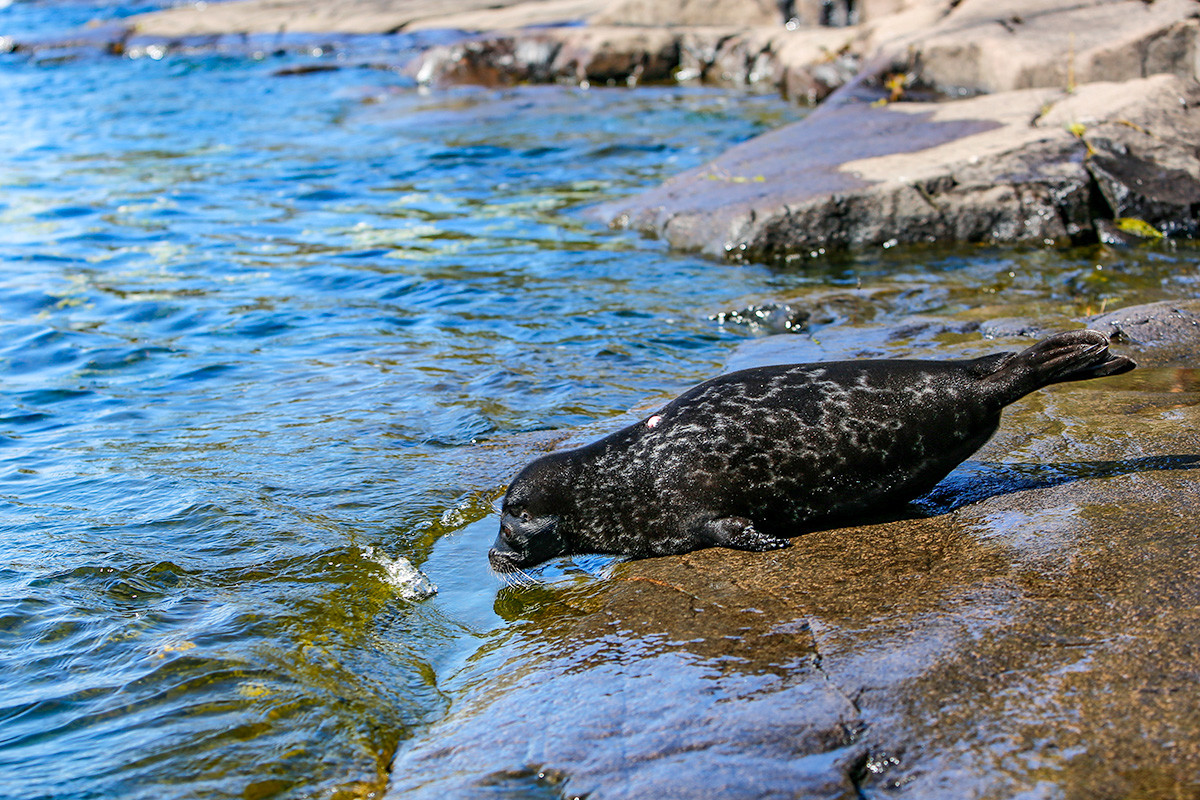 A local at the Ladoga Lake. 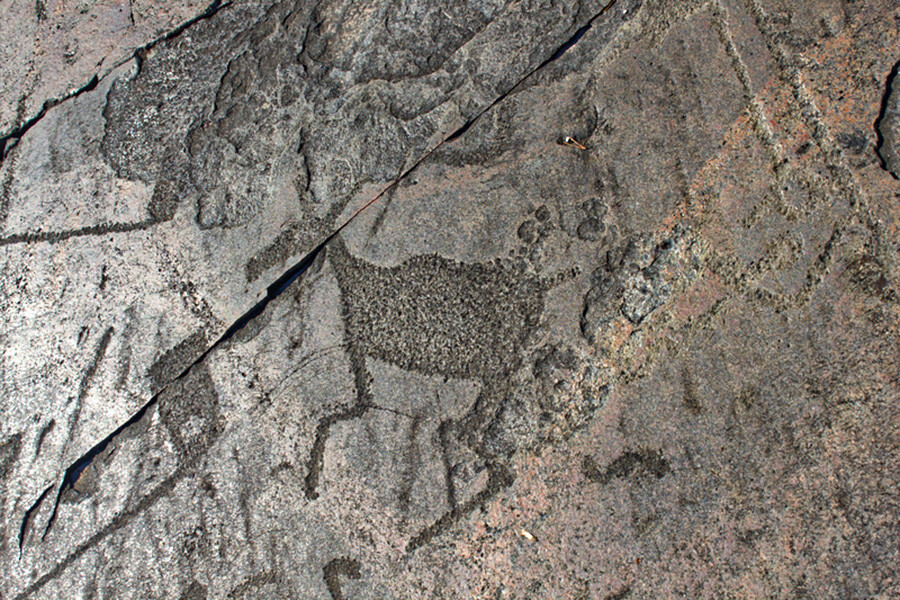 Petroglyph of a deer.

These carvings on rocks—messages from people who lived in the area 5,000-7,000 years ago—are considered one of the main mysteries of Karelia. They can be found all over the region, but most of all near the city of Belomorsk in the north of the republic. There are more than 2,000 of them here, with new ones being discovered all the time. They depict scenes from the everyday life of the ancient residents, ranging from fishing to domestic scenes. There are even pictures of people on skis! 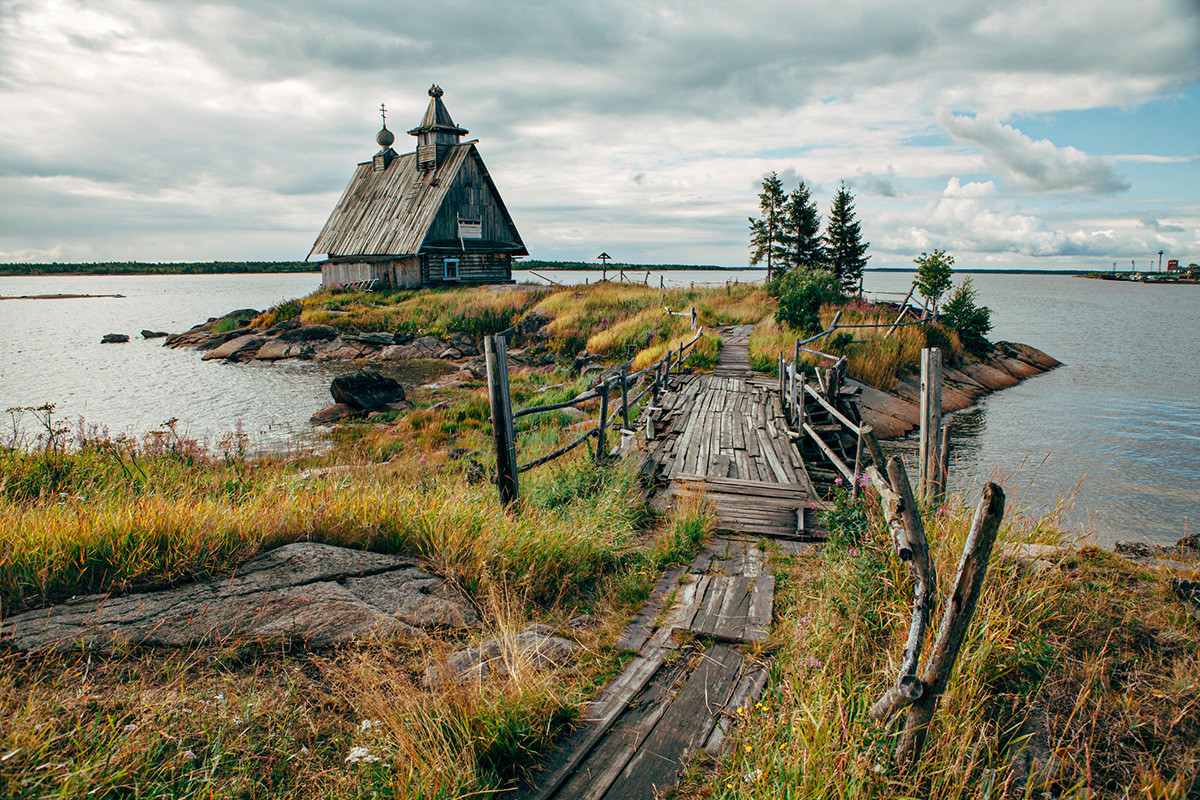 The famous view of Rabocheostrovsk.

In the 1920s, this old Karelian village on the shore of the White Sea housed a transit prison for inmates of the Solovki prison camp. What remains of the old buildings today are just their foundations and a ruined pier, although it still serves as a starting point for trips to Solovki. 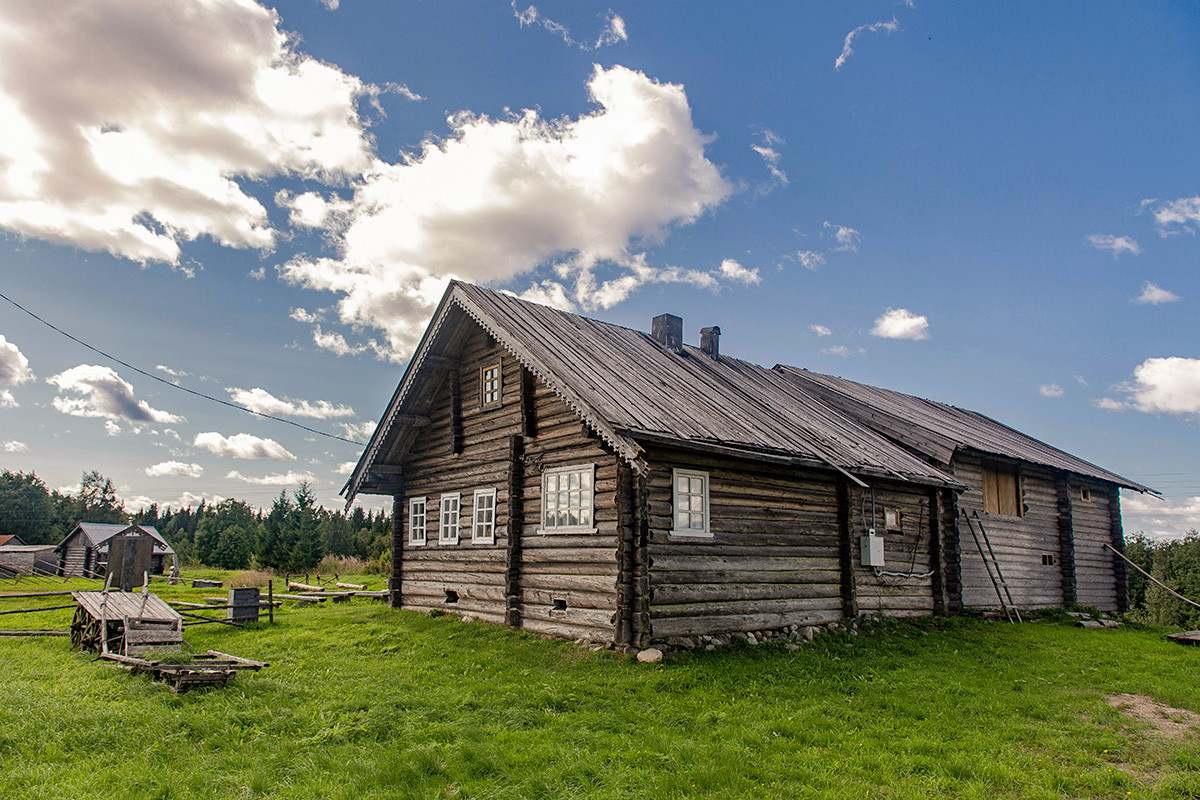 The Karelian village of Kinerma.

This tiny village with a population of just six people is a member of the Association of the Most Beautiful Villages of Russia and is considered one of Karelia’s main attractions. Kinerma has preserved the historical appearance of an old Karelian village, with real wooden houses dating back to the 17th and 18th centuries. 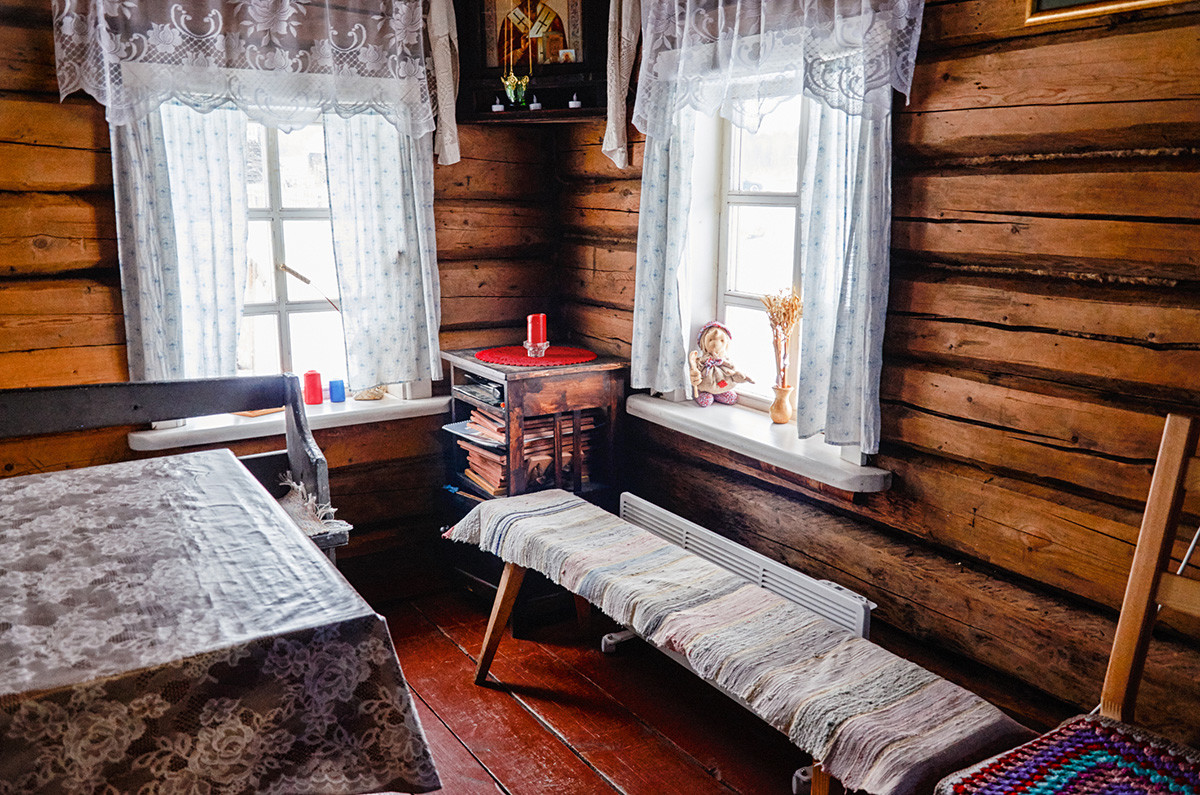 Inside a Karelian house.

Local residents have set up an exhibition for tourists that introduces everyday life in a Karelian village. And, of course, all visitors are treated to delicious local pasties, called kalitki.

If using any of Russia Beyond’s content, partly or in full, always provide an active hyperlink to the original material.