He remembers when the phone never rang. “The acts, promoters and agents weren’t calling us back in the ’80s; we were calling them,” says Pat Christenson, president of Las Vegas Events and former event coordinator for the UNLV athletic department, where he booked the Thomas & Mack Center and Sam […]

He remembers when the phone never rang.

“The acts, promoters and agents weren’t calling us back in the ’80s; we were calling them,” says Pat Christenson, president of Las Vegas Events and former event coordinator for the UNLV athletic department, where he booked the Thomas & Mack Center and Sam Boyd Stadium until 2001. “For stadium shows, we didn’t get a sniff. No one.”

That changed in April 1991, when Christenson lured The Grateful Dead to the latter venue. The band had worn out its welcome in Los Angeles because of its party-hard crowds and was looking for a new place to play in the region.

“If it weren’t for the fact that they were having trouble in LA, we wouldn’t have even gotten The Dead,” he acknowledges.

“When we showed that picture of that sold-out stadium to (Paul) McCartney and the Eagles and U2, it just changed,” Christenson recalls, having subsequently brought all of those acts to Sam Boyd Stadium. “They all wanted to play Vegas.”

Nearly three decades later, Vegas will take its next Neil Armstrong-worthy step forward on the stadium concert circuit with the opening of Allegiant Stadium.

Having hosted but one stadium concert since 2009, when U2 sold out Sam Boyd Stadium that fall, the city is poised to make a major re-entry into the market.

With the Las Vegas Raiders announcing that no fans will permitted in the stadium this season because of cornoavirus concerns, there will be no concerts for the foreseeable future.

But with Garth Brooks set to christen the stadium on Feb. 27, rescheduled from an initial date of Aug. 22, it’s only a matter of time before Vegas sees the benefits of the new venue.

“It’s amazing for this city to have a world-class stadium. It puts us on the map with other cities of a much bigger population,” says Bobby Reynolds, senior vice president of events promotion company AEG Presents Las Vegas. “Does it bring with it more opportunities for entertainment? Of course it does: Different tours just set for stadiums, different tours that have productions that they rely on that can only fit into stadiums.”

In recent years, Vegas has had a strong track record of bringing in acts that play stadiums in other markets to headline arenas here. Reynolds notes that Paul McCartney, Coldplay and Ed Sheeran all did so on recent U.S. tours. So, while the caliber of artists who play Vegas won’t change much with the addition of Allegiant Stadium, those artists no longer will have to downsize their shows to do so.

“You talk about a war of growth in production in the stadium shows, it’s monstrous,” Christenson says. “It’s incredible what these acts are putting into show production. It’ll be a different dimension, a different show.”

While there is a limited number of artists who can fill such sizable venues, the stadium concert industry remains robust, meaning Vegas most likely can expect an average of three to four such shows annually.

“I think there’s still 12-15, 20 acts who are stadium-size or who can command stadium crowds,” notes Don Muret, a senior editor at concert industry trade publication VenuesNow. “Just look at all the tours over the past five years. The stadium tour business has been strong.”

Of course, it remains unclear when stadium concerts will resume, though Brooks and hard rockers Motley Crue already have shows booked for 2021.

“There will still be demand; it’s just a question of what it will all look like in the post-COVID age,” Muret says of stadium concerts. “I think artists, bands, promoters, agents are going to take a closer look at the model in general just to figure out what makes sense for their acts and how those artists feel about it. Do they feel safe? Does it makes sense for them to play in front of these massive crowds? That’s a big question.”

“When they start up, the good news is that you’ll just have all these acts who are ready to hit the stadiums,” he says, “so there’s a good chance, once we’re going full blow, that you could end up with five stadium acts in your first year.”

With the explosive rise in superstar music residencies here in the last decade, from Lady Gaga to Bruno Mars, and a similar expansion of the local festival scene topped by massive events such as the Electric Daisy Carnival and Life is Beautiful, Las Vegas arguably has become the leading music destination market in the country.

Allegiant Stadium could provide the final jewel in said crown.

“We probably don’t beat Chicago or LA in terms of the total number of tickets sold, but when it comes to people who travel for music, I don’t think we have a peer,” Christenson says. “Look at where we were in the ’70s and ’80s, and then the investment that everyone has made in every niche of music here, every format, every type of theater. This caps all of that off.”

The British Museum Reopens to a World That Has Changed

Sun Sep 20 , 2020
LONDON — After being closed for 163 days by the coronavirus pandemic, the British Museum on Thursday became the last of Europe’s major museums to welcome back visitors. As at other institutions these days, there were hand sanitizer stations and one-way routes, a limited number of visitors, and many masks. […] 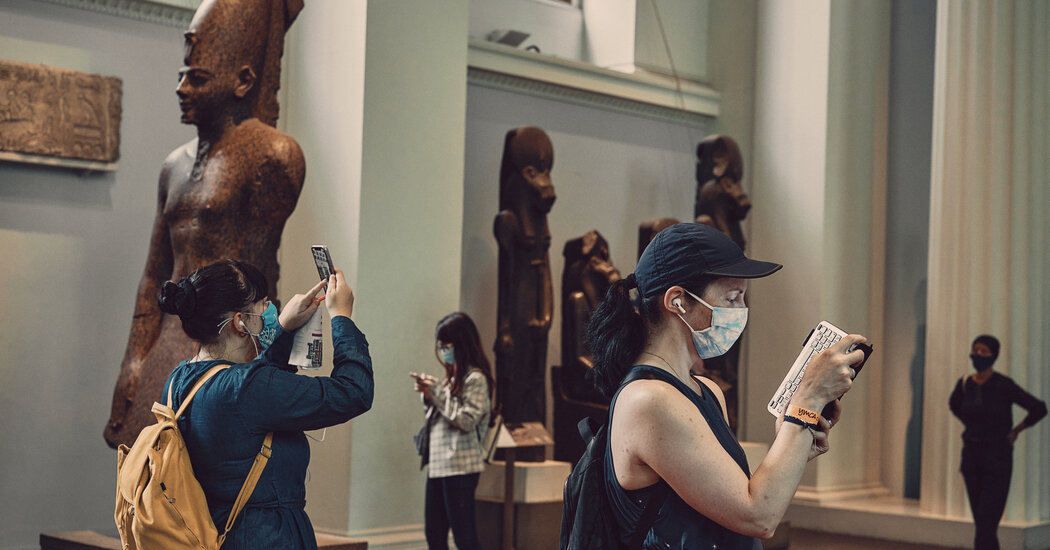