Two candidates battling to become San Diego’s first new mayor since 2014 have starkly different views on solving the city’s housing crisis, homelessness, vacation rentals, transportation challenges and revamping the sports arena neighborhood. Assemblyman Todd Gloria and Councilwoman Barbara Bry are both Democrats, so they have similar views on many […]

Assemblyman Todd Gloria and Councilwoman Barbara Bry are both Democrats, so they have similar views on many issues, including support for law enforcement reform, the city’s climate action plan and efforts to boost racial equity.

But some sharp differences have emerged during the runoff between Gloria and Bry. And both candidates contend their different leadership styles and backgrounds make them a better choice to lead San Diego into the future.

Bry said during a phone interview this week that giving up local land-use authority endangers the character of San Diego and many of its neighborhoods, adding there are less aggressive ways to solve the housing crisis.

She says local control gives neighborhoods crucial leverage to negotiate with developers for more amenities like parks and other changes to a proposed project.

“San Diegans should determine what happens in our neighborhoods,” she said.

Gloria said during a separate phone interview that state legislation is needed to force reluctant cities to do their part to help solve California’s housing shortage.

“This is a statewide crisis, and the state has a role in solving it,” he said. “My opponent seems to believe new housing is necessarily a bad thing for neighborhoods, and I disagree.”

Gloria and Bry also differ on revamping the blighted area around the sports arena. Termed-out Mayor Kevin Faulconer recently selected a developer to build high-rise housing and potentially replace the arena with a brand new version.

Key to that vision for the area is Measure E, a proposal on the Nov. 3 ballot to lift the 30-foot height limit in a targeted area around the arena. Gloria supports Measure E, while Bry opposes it.

“I think the rush to decide how to redevelop the sports arena land is another backroom real estate deal,” Bry said.

Any effort to lift the 30-foot height limit, which opponents call a slippery slope to lifting the height limit elsewhere on the coast, should have begun two years ago when the neighborhood updated its blueprint for development, Bry said.

Gloria said it’s inconsistent for Bry to say she wants neighborhoods to have a say in new housing proposals when she also opposes Measure E, considering it has strong support from businesses and residents near the arena.

He also said opposition to Measure E is the same as supporting the status quo for the area, which is marred by traffic congestion, rundown strip malls and the aging arena.

Gloria said he’s uncertain whether he would go with the plan proposed by the developer Faulconer selected, but he added that approval of Measure E gives the next mayor more flexibility to make the area a badly needed economic engine.

Bry and Gloria also disagree on how to tackle homelessness in San Diego, where the number of unsheltered residents is among the highest in the nation.

Gloria supports the “housing first” model, which focuses on getting homeless people off the streets and into housing as the first move to help them.

Bry supported that approach for many years, but now supports drug and mental health treatment before housing in some cases. She also supports the city’s bridge shelters, which veer from the housing-first model.

“I used to believe in the housing-first model, but then I went back and looked at the data,” said Bry, explaining that San Diego has not made much progress reducing its homeless population.

Gloria said Bry has taken an unusual position that isn’t considered a “best practice” around the nation. He also noted that he prioritized homelessness when he was on the City Council more than Bry has.

Gloria also said Bry mischaracterizes his approach by implying it involves nothing more than supplying housing.

“She seems to suggest it’s housing only, but ‘first’ implies there is more to come,” he said.

The candidates also differ on short-term vacation rentals. Bry says the city should crack down using its existing laws, and Gloria promises new legislation to allow the rentals but with restrictions and fees.

Both candidates criticize each other for not successfully tackling the issue during their tenures at City Hall— Gloria served on the City Council from 2008 to 2016, while Bry was elected to council in 2016 just as he was leaving for the Assembly.

Bry supported legislation two years ago that would have allowed and regulated vacation rentals, but she later switched her position when she discovered the rentals occupy 16,000 houses in the city, double previous estimates. That discovery prompted her to favor an immediate crackdown instead of regulations allowing the rentals to continue.

Bry has criticized Gloria for taking a significant amount of campaign money from the vacation rental industry. Gloria says he needs to take contributions because he can’t match the personal wealth of Bry, a high-tech entrepreneur.

Gloria says the county’s plan, which would connect Lindbergh Field to the San Diego trolley, fits with his campaign theme that San Diego needs world-class solutions to its problems so it can become a world-class city.

He says the plan’s high-speed rail, shuttles and other proposed projects will give San Diegans the choices they need to commute more conveniently, which will spur economic development and help the city meet its climate action plan goals.

Bry says she supports more public transit as part of the city’s future, but she calls the county’s plan too ambitious and not “forward-looking” enough.

She criticized the county’s plan for tunneling under neighborhoods in order to boost transit. She also said the county’s plan doesn’t account for autonomous vehicles, which she believes will be a key part of San Diego’s transportation future.

Because more people will be working from home, Bry says, her plans for future transit would be more limited — and less expensive.

Another key to solving transportation challenges, she said, will be locating job centers in strategic places. She hailed a new technology hub proposed last week along the downtown harbor near multiple trolley lines, calling that part of the solution.

While both candidates support efforts to boost racial equity across the city, Gloria was the first to unveil a detailed plan. His proposal would boost housing opportunities for low-income residents, provide safe routes to schools in poor areas and make changes to the city’s gang injunction policies.

Bry said she plans to soon release a racial equity proposal that focuses more on creating tech jobs for young people across the city, especially south of state Route 94. She also will focus on her previous proposals to provide free broadband Internet in poor neighborhoods.

Bry has repeatedly criticized Gloria for being a career politician, contending that her business experience makes her the better candidate, someone who is more independent of local special interests.

Gloria says having a businessman like President Donald Trump in the White House the last four years has not been a good thing.

“I know politics is bad business, but I never thought it would be like this,” Bry said.

Supporters of Gloria say Bry has been shown to be someone who is trying to be different things to different constituencies, and as someone who has switched many of her positions during the campaign.

Bry has targeted Gloria’s broad support from developers, the San Diego Regional Chamber of Commerce and labor unions, saying it shows that they don’t expect him to make any changes to what she calls a “culture of corruption” at City Hall.

Gloria says he’s proud of his long career in public service and that his broad support is the result of people knowing he can get things done and broker compromises when necessary.

He also notes that he would be the city’s first gay mayor and first minority mayor. He is Latino, Native American and Filipino. Gloria also touts being a lifelong San Diegan.

“I know this city, I’ve seen what people go through and I know how to help,” he said. “My vision for the city accommodates every San Diegan who is willing to work hard and play by the rules.”

Bry says she will clean up City Hall on behalf of taxpayers because she’s not beholden to anyone.

“I’m an independent problem solver with a lifelong track record of getting things done,” she said.

Gloria finished first in the March primary by a wide margin, while Bry edged out Republican Scott Sherman for the second slot in the runoff.

Mon Oct 5 , 2020
Trump seen leaning for Walter Reed Hospital on October 2, 2020. A host of people traveling with the … [+] president tested positive for SARS-Cov-2 last week, testing the patience of long investors ahead of the election. (Photo by Drew Angerer/Getty Images) Getty Images Investors large and small are likely […] 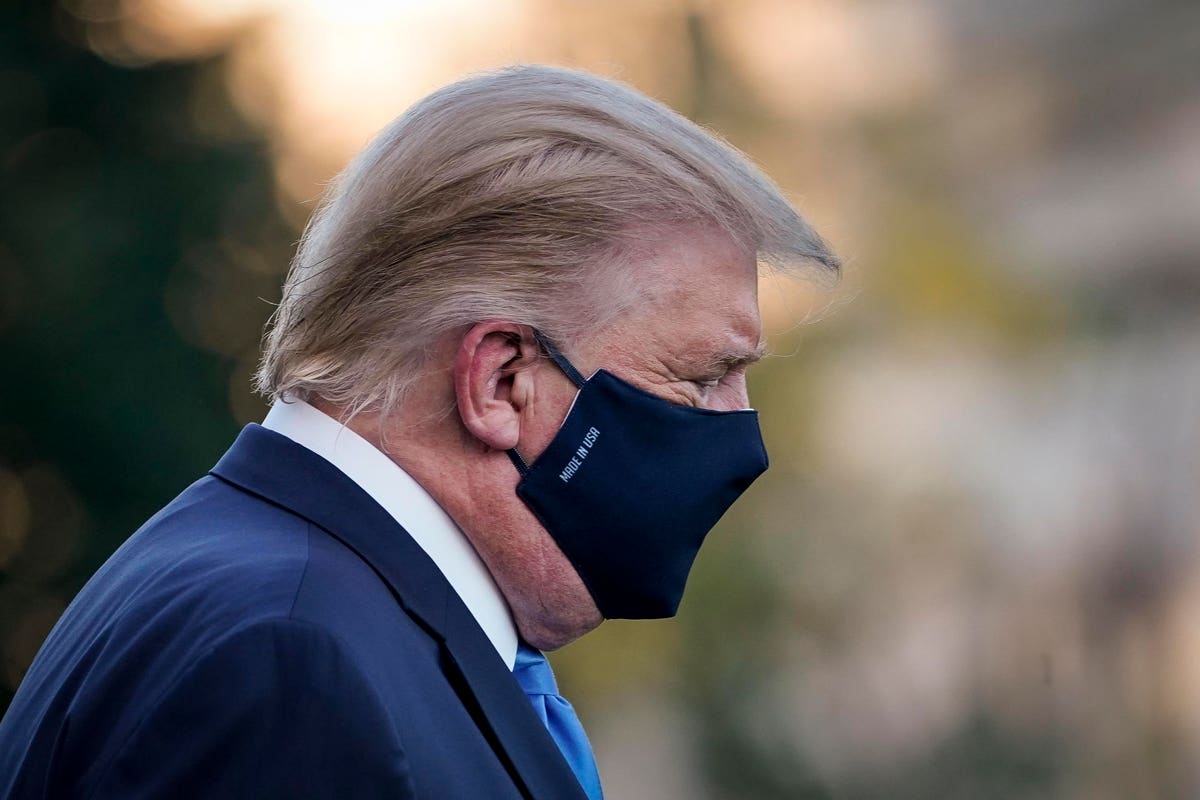