Skip to content
By: Noble HorvathPosted on September 26, 2020
CLOSE

‘Uncle Jim” Allen, the last surviving member of the search party that found Dr. Elisha Mitchell dead at the bottom of a Yancey County waterfall in 1857 met with a reporter in July 1922 to add to the famous account made by “Big Tom” Wilson.

Mitchell is credited with having determined that what is now called Mount Mitchell is the tallest mountain east of the Mississippi. Big Tom, the veteran hunter and guide, told his tale in 1905, and it has been reproduced many times.

Uncle Jim started off by saying emphatically that “Big Tom got all the credit (see the NC Dept. of Cultural Resources site, for instance) and the others none, although the entire party found him.”

Tom, Jim and Jim’s brother, Adorirum, had been together as one search party as groups split up on what turned out to be a four-day effort in the wilderness around Black Mountain.

“Jim and Adorirum Allen and myself went to the garden patch just below Mitchell’s Peak, scattered out and began searching,” Wilson said in his account. “Present(ly) Adorirum said: ‘Come here! Here’s a man’s track.'”

There was a discussion about whether it might be a bear’s paw print or human, but then Big Tom found another print with shoe tack marks.

Upturned laurel leaves, sideways-stepping footprints and logs with moss scraped off them led to the top of a falls, where seven days earlier Mitchell had slipped, fallen into a pool and drowned. His hat was floating. 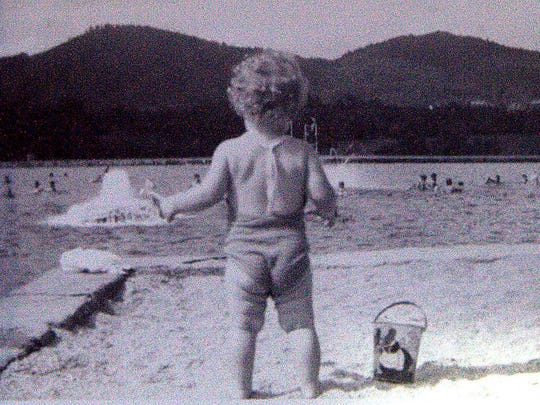 In 1922, the automobile road to Mount Mitchell had just been completed when Uncle Jim, age 87, made his recollection about the long-ago time.

He was speaking from his cabin on Beaverdam Creek, north of Asheville, where he was also witnessing the advent of a new era and the loss of an old one.

Most painfully, Katherine, his wife of 53 years, had fallen off their porch and died on Jan. 6. It was a week during which two other Beaverdam elders also passed.

On Jan. 19, the Asheville Citizen blared, “Giant resort in Beaverdam section planned.” Within a month, it was clear. The Lake View Park Company had purchased 1,100 acres on both sides of Beaverdam with plans to dam the creek, create a lake, erect hotels, provide a golf course and build homes unspoiled by commercial or industrial uses.

It wouldn’t have happened without Paul Roebling, great-grandson of the man who designed the Brooklyn Bridge.

Roebling, a long-time Asheville transplant whose parents had lived in Montford, died in 1918 of influenza, which was epidemic that year.

In 1917, he had completed construction of the Haywood Building at 38-58 Haywood St. Richard Sharp Smith designed it. It had a garage in back and was made of reinforced concrete. Locals called it “Roebling’s Folly” because it sat at the bottom of Battery Park Hill away from the Patton Avenue business strip.

An obituary in the Citizen said Roebling “loved Asheville and had other large plans for aiding in community development, some of which were interrupted by the outbreak of war.”

His property along Beaverdam and in Baird’s Bottom was thought to be a good place for a recreational park. 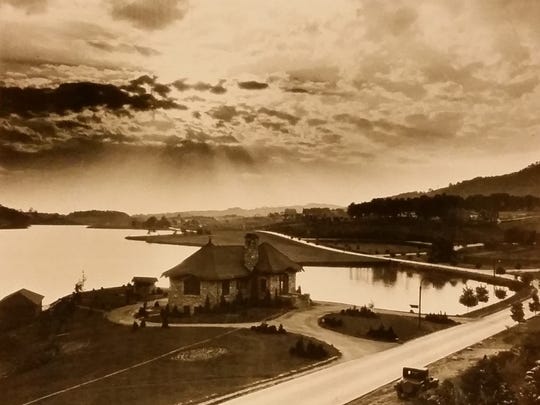 “After his death,” Dr. Russell Norburn, founder of the Norburn Hospital in Asheville, told UNC Asheville historian Louis Silveri in 1975, Roebling’s brother, Siegfried “came down here to close out the estate and we had a group of five overseers that took him in charge and told how Paul was such a playboy and the Haywood building was a bad investment, that this property out there on Lake View Park would be no good.

“And so they got all the right property for a song, and went on and developed Lake View Park. It made them all wealthy, until their bank, the Central Bank, crashed, and they lost it.”

Lake View Park was generally seen as an economic generator. The Dixie Highway had been extended from Chicago to Miami, incorporating Merrimon Avenue.

Other developers along the road looked to the proposed Beaver Lake park to attract people to their subdivisions. Retail establishments spotted new customers.

“The next big thing that comes Asheville’s way,” Goode’s Drug Store asserted in an ad, “is the development in Beaverdam … In the meantime Goode’s Original Drug Service still stands the test of public opinion.”

The word “original” suggested that pre-existing institutions did not want to lose standing in the new golden age. But the electric car line from Grace to Weaverville, established by Reginald Howland in 1909, was getting in the way, and was about to lose its grip.

“Plans for the construction of a lake at the Beaver Lake development in Beaverdam valley have been abandoned by officials of Lakeview Incorporated,” the Asheville Citizen reported on April 23, 1922.

An undated historic photo of Beaver Lake. The Edgewood Restaurant was not far away. (Photo: MALCOLM GAMBLE/Citizen-Times)

Lake View Park (it is variously spelled, but the original literature separates the words) needed to have Howland relocate the tracks out of Baird’s Bottom to a higher point, south, so that the low area could be flooded, and Howland denied the deal.

Howland was in financial trouble. He was continually investing in new lines. Usership was down with the popularity of the automobile. Then, on May 12, a trolley delay caused by a power failure prompted Howland to man a car and rush to the New Bridge stop, and he collided head-on with a car driven by Albert Ballew, killing him.

“The Asheville & East Tennessee (the name Howland had given his railroad in 1909 when he sought to connect with the Clinchfield line in Tennessee) went into receivership,” David Bailey stated in “Trolleys in the Land of the Sky. “The claims arising from the wreck, on top of deficits already incurred from operations made any other course out of the question.”

Siegfried Sternberg, owner of Sternberg and Co., hides, furs and junk, and president of Liberty Realty Co., bought the line at auction for $20,000. He offered a local group the opportunity to revive the railroad, but it couldn’t raise the funds. The tracks and cars were junked, and the land sold to Lake View, which dammed the creek and filled the lake.

Up the creek from the lake and the development, the old way of life persisted.

Judge James Murphy, one of the Lake View Park principals, recommended that Asheville build a packing house to accommodate the beef industry.

Charles Webb, Asheville Citizen publisher, established an orchard on Webb Cove Road, and in 1922 won State Fair prizes for his Starks Delicious variety. Elton Warner of Beaverdam was the featured speaker at the NC Beekeepers’ conference.

“Uncle Jim” Allen would have noted that Charles W. Baird, son of William A. Baird’s cousin, Dr. J.S.T. Baird, operated, with his wife, a guest house out of their home, which they named Bannockburn. Mrs. Baird hosted a fortnightly social club there.

On July 7, 1924, four years before his death at age 93, Allen would have witnessed the opening date for purchasing homes in the “Recreation Section of Lake View Park.” “Real estate is the basis of all wealth,” the announcement advised.

Rob Neufeld wrote the weekly “Visiting Our Past” column for the Citizen Times until his death in 2019. This column originally appeared September 2015.