The coronavirus pandemic has been great for pot stocks — well, for most of them. Stay-at-home orders and business shutdowns have highlighted marijuana’s evolution into a staple consumer good. It’s been able to draw consistent and highly regular demand throughout the pandemic. The uptick is partly because of its medicinal benefits: Research has shown that marijuana can help treat anxiety, which has had an outsized effect on women, young adults aged 18 to 24, and those staying at home with young children, according to new research published by The Lancet.

Some U.S. cannabis companies have seen their revenue growth triple this year, even within a limited legal market. In the U.S., cannabis is still illegal at the federal level. Nevertheless, Massachusetts-based Curaleaf Holdings (OTC:CURLF) saw revenue jump 142% year over year to $117.5 million in its recent second quarter ended June 30. Meanwhile, Illinois-based Cresco Labs (OTC:CRLBF) also saw second quarter revenues up 216% to $94.2 million compared to the year-ago period. However, their Canadian counterparts’ revenue growth has remained modest, despite high consumer demand. The Canadian industry has struggled in part because fewer legal stores have opened in 2020 as a result of regulatory hold-ups. Adding to the strain is the still-thriving black market, which offers a variety of cannabis products, often at cheaper prices.

Illinois-based Green Thumb Industries (OTC:GTBIF) is another one of the lucky U.S. pot stocks. It’s growing its revenues and has enjoyed consistent positive EBITDA (earnings before income, tax, depreciation, and amortization), but has also kept its balance sheet fit enough to fuel expansion. Meanwhile, Canada-based OrganiGram (NASDAQ:OGI) hasn’t reported sufficient revenue to generate profits, and its recent quarterly results were worrisome. Let’s take a deeper dive into each of these stocks in order to determine which provides the most long-term investment benefits. 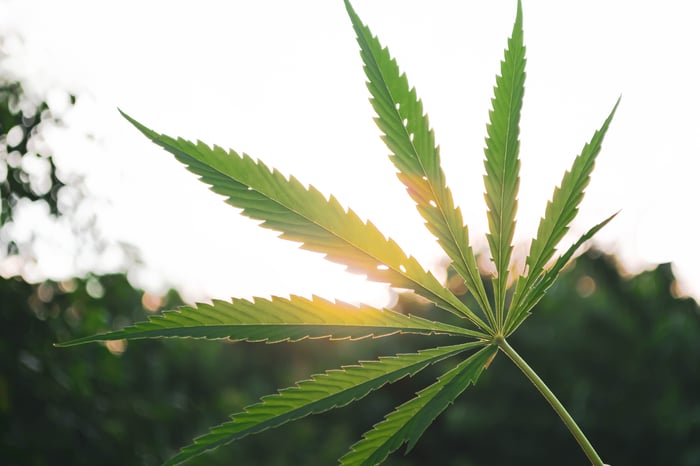 OrganiGram’s third-quarter revenue numbers don’t paint an optimistic picture of its business. The pot stock saw revenues decline 27% year over year to 18 million Canadian dollars in the quarter ended May 31. According to the company, shrinking dried cannabis flower sales were the main culprit, which suffered sales slips from increased competition and a demand for larger portions of its value products, after consumers were encouraged to stock up for the pandemic.

The company also failed to capitalize on the benefits from its cannabis derivatives products, which were legalized as a component of cannabis 2.0 legislation in October 2019. The pandemic forced OrganiGram to cut its workforce by 45%, which management said was the reason for the delayed launch of the company’s new derivatives products. OrganiGram had been considered an early mover in the newly legalized space when it introduced a few of its vape products to the Canadian market in December.

Unfortunately, OrganiGram’s selling, general, and administrative (SG&A) expenses jumped by 13% year over year to CA$10.2 million, and its cost of sales rose by a whopping 256% to CA$44.3 million from the year-ago period. Both these expenses resulted in a quarterly EBITDA loss of CA$24.7 million versus an EBITDA profit of CA$7.7 million in third-quarter of 2019. Management attributed the increase in expenses to the scaling of its operations, including marketing and other costs incurred for the launch of its derivatives products.

Green Thumb saw a whopping year-over-year surge in revenue of 167% to $119.6 million in its second quarter ended June 30. Green Thumb is known for its Rise and Essence cannabis store chains, where its products are offered under the Dogwalkers, Dr. Solomon’s, and Rhythm brands. Its rising revenue contributed to another quarter of positive EBITDA of $35.4 million, which was an impressive increase from $2.3 million in the prior-year period.

Green Thumb’s focus on its home state of Illinois has proved a sensible decision. Illinois made recreational cannabis legal in January, and sales have soared sky high since then. In the first month of legalization, cannabis sales in the state soared to $39.2 million. As of August, statewide sales rang in at a record-breaking $63 million. Green Thumb took the saying “strike while the iron is hot” seriously, and has continued expansion in the state. It opened its eighth store there in May.

The company has also made a mark in other key markets like Pennsylvania, where it opened two new medical cannabis stores, Rise Chambersburg and Rise Duncansville, in June. In total, it operates 48 retail stores across 12 U.S. states. The company ended the second quarter with $82.9 million in cash and cash equivalents, alongside $95.2 million in total debt. 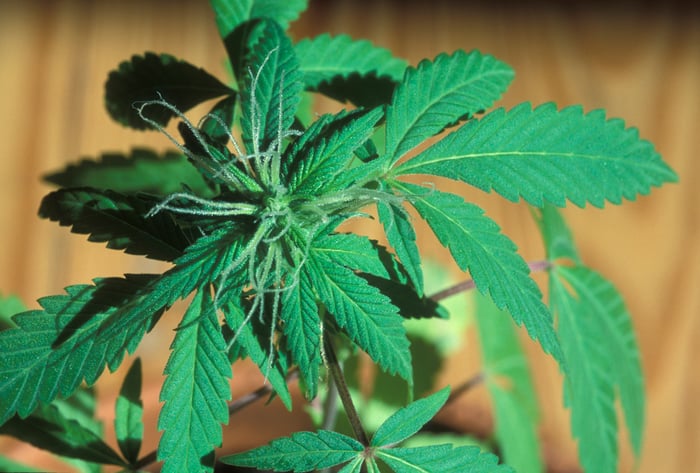 The choice is clear

After evaluating its progress this year, there is no doubt that Green Thumb Industries is the better marijuana pick today. Though the situation in Canada is slowly improving (Ontario received its 100th store authorization in April), regulatory processes still could delay the opening of new stores. In turn, this would continue to drag on OrganiGram’s sales growth by delaying the launch of derivatives products. Although the licit cannabis market is slowly improving this year, having overtaken the illicit market in sales for the first time in history, the black market continues to prove a challenge for cannabis producers.

Meanwhile, there is no stopping Green Thumb’s progress. The Illinois market is new and has a long road ahead before it realizes its full potential. Meanwhile, states including New Jersey, Mississippi, South Dakota, Arizona, and Montana have legalization proposals on their November ballots.

Shares of Green Thumb are up 36% so far this year, while OrganiGram is down 56%, worse than the industry benchmark. The Horizons Marijuana Life Sciences ETF slumped 32% over the same period. 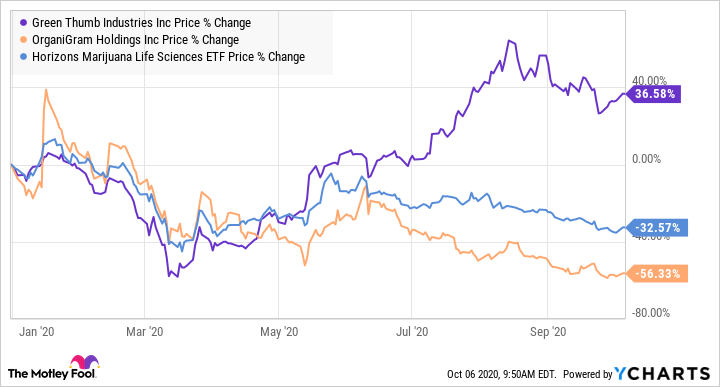 With excellent revenue growth, a stable cash position to cushion any unanticipated circumstances, and consistently positive EBITDA, this is the right marijuana pick for both new and seasoned investors.