A Canadian man whose remarkable story as a fighter with the Islamic State in Syria was turned into a New York Times podcast has been charged with ‘a hoax regarding terrorist activity’.

Shehroze Chaudhry, a 25-year-old from Burlington, Ontario, claimed he traveled to Syria in 2016 to join the terrorist group ISIS and committed acts of terrorism.

His story was the focus of Caliphate, a podcast launched in 2018, for which Rukmini Callimachi was nominated for a Pulitzer Prize, and won a Peabody Award.

The Royal Canadian Mounted Police announced on Friday that they had arrested Chaudhry, who went by the name Abu Huzayfah in the podcast, and described in harrowing detail his role in executions.

‘Hoaxes can generate fear within our communities and create the illusion there is a potential threat to Canadians, while we have determined otherwise,’ said Superintendent Christopher deGale, the Officer in Charge of the RCMP O Division’s Integrated National Security Enforcement Team. 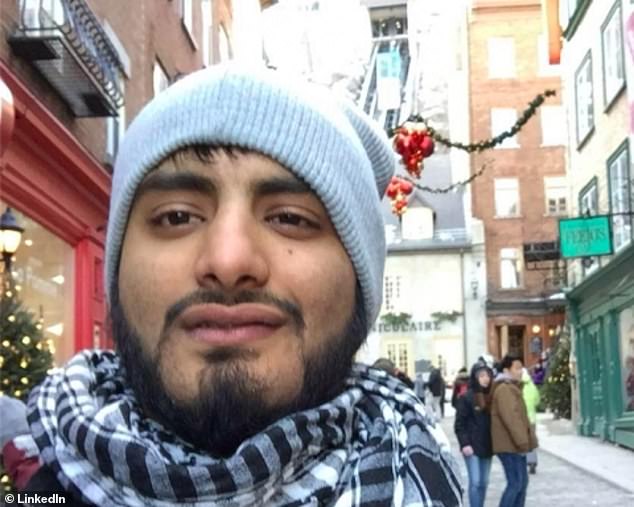 Shehroze Chaudhry, 25, from Burlington, Ontario, has been charged with a terrorism hoax 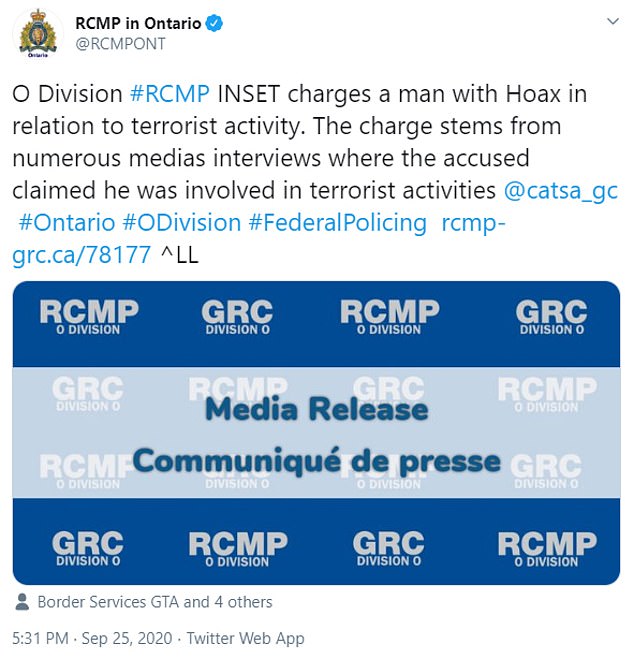 Charges against Chaudhry were announced on Friday by Canadian police

‘As a result, the RCMP takes these allegations very seriously, particularly when individuals, by their actions, cause the police to enter into investigations in which human and financial resources are invested and diverted from other ongoing priorities.’

Chaudhry will appear in court on November 16.

His account, as told to Callimachi, was incredibly graphic, in particular as he describes killing a man in an ‘orange jumpsuit.’

He says: ‘The blood was just — it was warm, and it sprayed everywhere….I had to stab him multiple times. And then we put him up on a cross. And I had to leave the dagger in his heart.’ 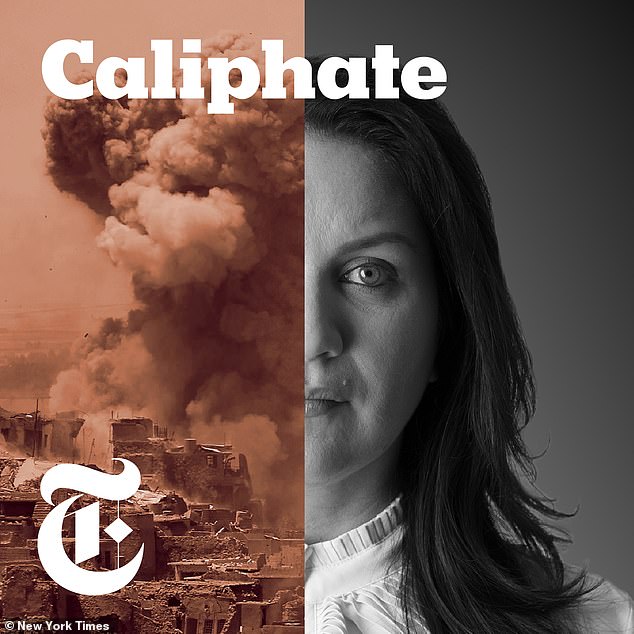 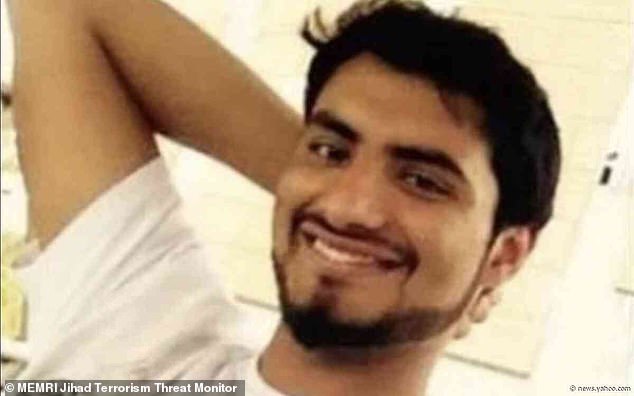 Yet Chaudhry also spoke to Canadian Broadcasting Corporation and told a different story, which the CBC detailed in a May 2018 article headlined: ‘Did former Canadian ISIS member lie to the New York Times or to CBC News?’

Nazim Baksh, a CBC News producer, said: ‘We asked him repeatedly, did you do anything, did you kill, did you execute, did you participate?

Five days after the CBC report, the New York Times published the sixth episode of Caliphate, in which Callimachi and her colleagues revealed they had found a problem with Abu Huzayfah’s timeline, and that his version of when he was in Syria did not stand up to scrutiny.

The Times also managed to secure a photo of Abu Huzayfah on the banks of the Euphrates River in Syria, an indication that he had indeed made the trip.

Danielle Rhoades Ha, a Times spokeswoman, said in a statement that the podcast detailed questions about his story.

‘The uncertainty about Abu Huzayfah’s story is central to every episode of Caliphate that featured him,’ she said.

‘The episode tells listeners what our journalists knew for sure and what was still unknown.’

Callimachi tweeted that his arrest was ‘big news’. 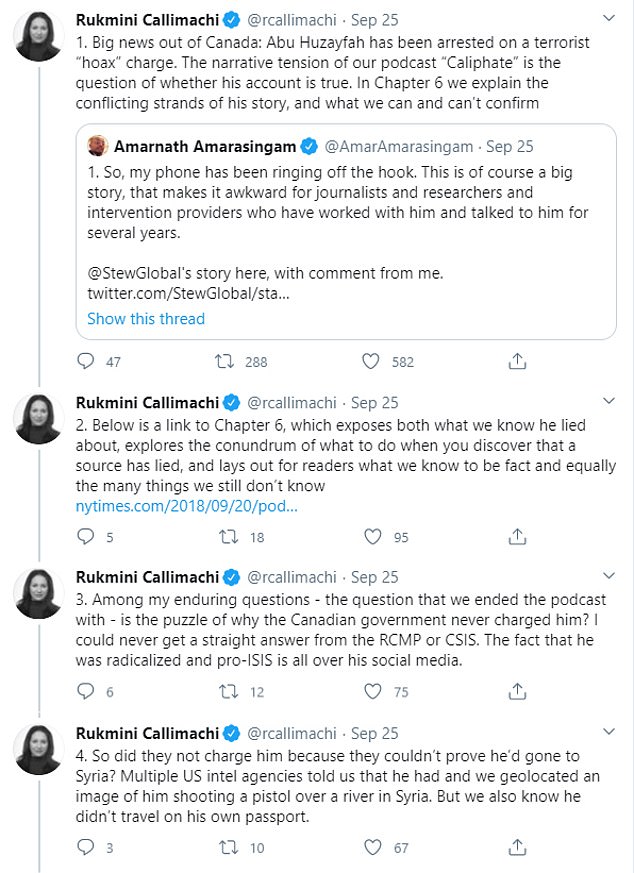 Callimachi tweeted on Friday that Chaudhry’s arrest was ‘big news’ 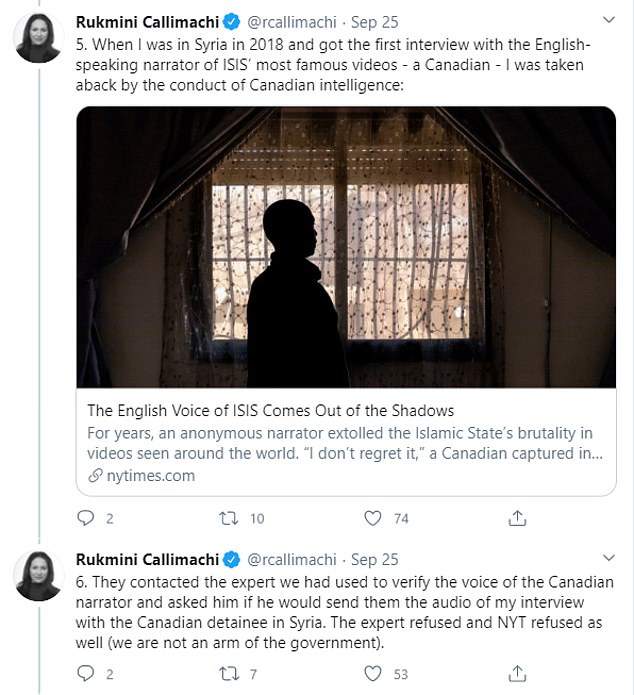 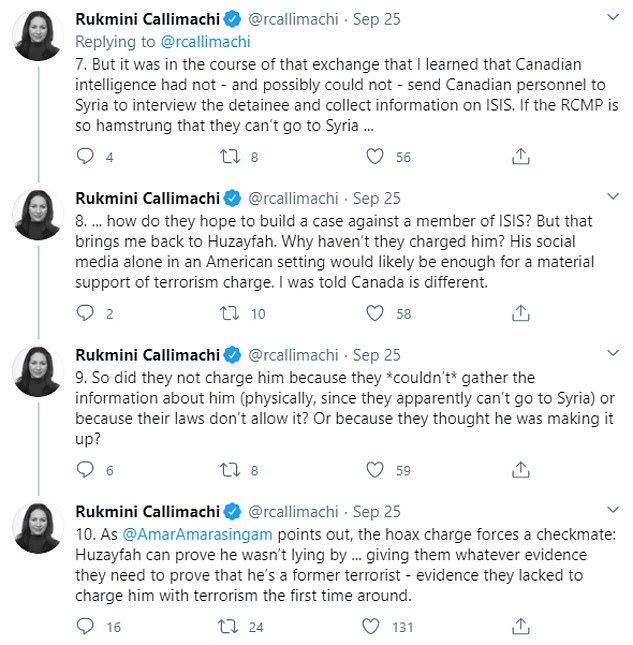 Callimachi also said that he was now stuck in ‘checkmate’

‘The narrative tension of our podcast “Caliphate” is the question of whether his account is true,’ she said.

‘In Chapter 6 we explain the conflicting strands of his story, and what we can and can’t confirm.

‘Among my enduring questions – the question that we ended the podcast with – is the puzzle of why the Canadian government never charged him? I could never get a straight answer from the RCMP or CSIS.

‘The fact that he was radicalized and pro-ISIS is all over his social media.’

She concluded that Chaudhry was now in ‘checkmate’.

‘The hoax charge forces a checkmate: Huzayfah can prove he wasn’t lying by … giving them whatever evidence they need to prove that he’s a former terrorist – evidence they lacked to charge him with terrorism the first time around.’