Nowadays, when a business closes in a bustling part of town, a question often asked is, “When is a brewery going there?” And why not? It happens all the time.

That was the case of Frequentem, Canandaigua’s fifth brewery, which opened in September at the site of a gutted Byrne Dairy that shuttered in 2018 and conveniently offered plenty of cooler space.

The 10-barrel brewery owned by the husband and wife team of David and Meagan D’Allesandro is the newest addition to a booming beer scene in Canandaigua.

“I think having more of these breweries here that are getting a lot of recognition is only encouraging more people to come here,” David D’Allesandro said. “It’s helping people get out there and explore what there is to offer.”

At Young Lion Brewing, just down the road from Frequentem on South Main Street, owner Jen Newman said there has been a sea change in brewing culture in the region since she opened in 2017.

“I think that the culture of the Finger Lakes overlaps very well with the culture of the brewing community,” Newman said. “It’s a very down-to-earth and very supportive community that is a little more laidback. When we put these things together, it makes for a wonderful incubator for brewing.” 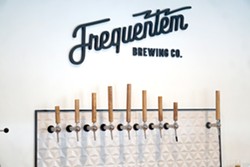 Newman serves on the board of the ROC/FLX Craft Beverage Trail, an organization officially formed in 2017 through the Finger Lakes Visitor Connection Center. The goal is to promote the Finger Lakes region as a beverage destination, from wine to beer and spirits.
President and CEO of the Connection Center, Valerie Knoblauch, said there is a thirst right now for anything local.

“The more local it is, the more human it becomes and the more interested you become in the stories behind it,” Knoblauch said. “That’s what’s all melding behind the trail, it’s the stories that tie into everything.”

Each brewery in the region has its own unique backstory.

Newman was a former tech entrepreneur who moved to beer after a series of successes allowed her to pursue a passion project. D’Allesandro is an engineer who picked up homebrewing after a little liquid courage moved him to pick up a brew-in-a-bucket kit. Naked Dove, the first brewery in Canandaigua, was founded by two Genesee Brewing Company co-workers, Dave Schlosser and Don Cotter, in 2010.

Those breweries have wildly different origins, but they all share a common goal: brewing great beer.

“We’re in a good place being here in Canandaigua,” Meagan D’Allesandro said. “The more breweries we have here, the more of a destination it’s going to become for beer drinkers.”

This offering is brewed with Norwegian Kveik yeast, a relatively recent form of fast-fermenting yeast.

While yeast is not the darling of tasting notes compared to boutique hop varietals and the balance of malts, it provides more subtle flavor characteristics of fruit and spice. And, of course, without it, beer is nothing more than sobriety-preserving sugar water. This sour leaves an ultra-crisp finish complemented by a moderate presence of stone fruit and sweetness.

This small batch gose first popped up on Young Lion’s taps when the brewery opened in 2017, and I immediately began begging for it to be put in cans. My pleas were met in July when the brewery made it a production beer. It’s a simple, low-alcohol, and delightful sour blended with lychee and blood orange.

At the brewery, look for more rotating gose varieties. Past iterations have included a version with Earl Grey tea, and another brewed with cuttlefish ink. Seriously.

Naked Dove turns 10 in November, and has been consistently pumping out this barrel-aged triumph on a seasonal basis. A welcome respite from the modern, ultra sweet “pastry stouts,” Naked Dove’s Russian imperial is deep and rich, bursting with complex notes of roasted coffee, bourbon, cocoa, and preserved fruit.

Two things have remained consistent in my time writing about beer: IPAs remain king, and they unfailingly have great names. Moon Perfume is a double dry-hopped IPA ripe with floral notes and tinges of tropical fruit. It’s bitterness stands halfway between the old school, super-hopped West Coast IPAs and juicy New Englands. Not too soft, not too astringent, Moon Perfume is just right.