Although its cover illustration depicts a gorilla, Eric Carle’s “From Head to Toe” is more a matter of monkey see, monkey do. The children’s book, from the author of “The Very Hungry Caterpillar” invites readers to move parts of their bodies in similar fashion to a variety of friends from […]

Although its cover illustration depicts a gorilla, Eric Carle’s “From Head to Toe” is more a matter of monkey see, monkey do.

The children’s book, from the author of “The Very Hungry Caterpillar” invites readers to move parts of their bodies in similar fashion to a variety of friends from the animal kingdom.

“I am an elephant,” a passage from the book reads. “I can stomp my feet. Can you?”

Upper St. Clair youth services librarian Colleen Miles paraphrased the book as she described a new activity that has been put into place on paved trails outside of the township Community and Recreation Center.

Called the Story Walk, the activity consists of a series of signs depicting “From Head to Toe” characters and their instructions to act like they do. So participants, young and old alike, are encouraged to follow the lead of the aforementioned pachyderm and stomp along the trail to the next stop.

Launched in conjunction with C&RC RAD Day – celebrating Allegheny Regional Asset District, which financially supports facilities such as the Community and Recreation Center – the Story Walk is intended to remain intact as weather permits.

“The two departments had been trying to figure out how to do a cooperative program that would combine our efforts, which is connecting literature to children and activities for families,” Miles said, adding the caveat caused by COVID-19, “without going inside.”

If the number of people who have been visiting the Community and Recreation Center and the adjacent Boyce Mayview Park is any indication, the Story Walk should receive plenty of attention.

“Our park has seen more significant use than ever before, due to the current situation,” Lindberg, the center’s marketing and membership supervisor, said. “I think a lot more people are looking to get outside, where they feel more comfortable. And having the luxury of all these paved trails, it was just a perfect fit for us.”

Miles said she had been thinking about approaching the recreation department about collaborating, and this year’s unprecedented circumstances prompted her to do so. She mentioned a conversation while she was installing the Story Walk signs.

“A walker who is a mother said, ‘I think kids would enjoy this even without COVID-19,’” Miles recalled. “I told her, ‘Oh, absolutely. But it took COVID-19 to have us brainstorm and think.’”

“Even though the pandemic has caused a significant number of challenges within our department as well as the library, we’ve found that it actually has pushed us to look more outside of the box than ever,” she said. “Something like the Story Walk is a great real, working example of how that has brought us to a point that we might not have reached otherwise.”

After the center’s temporary closure through the spring and early summer, programming returned on a limited, but successful, basis. An example was the outdoor Camp St. Clair, led by Sekanic for children throughout the local area.

“That was a true reminder for us as to what the rec department means to not only Upper St. Clair, but the surrounding communities,” Lindberg said. “We could see that parents, children, families, they needed something. They really needed something.”

Activities for the fall will continue along similar lines.

“Like Colleen mentioned, we’re always looking for opportunities to keep people outdoors, in the fresh air. That’s where a majority of our participants feel the safest, so that’s what we’ve tried to go with,” Lindberg said.

Among the current offerings are youth sports, group exercises and yoga, “which is taking off like crazy,” she said.

“It’s just really nice to see people back, using the park, taking part in programs. It’s an exciting time for us,” she said.

Fri Sep 25 , 2020
Vanderbilt University today launched Destination Vanderbilt, a $100 million university excellence initiative to recruit new faculty. Over the next two to four years, the university will leverage the investment to recruit approximately 60 faculty who are leaders and rising stars in their fields. Chancellor Daniel Diermeier (John Russell/Vanderbilt) “This is […] 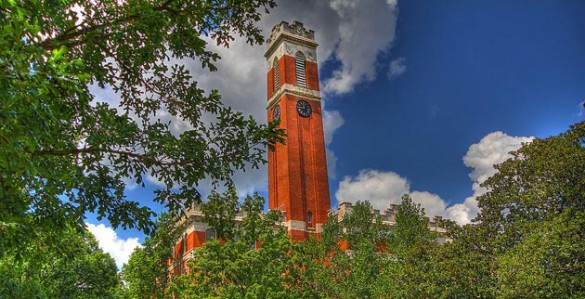