Min Kim arrived in Las Vegas in mid-January to step into the role of executive chef at Wynn’s dreamy Japanese restaurant Mizumi, an obviously comfortable fit. The son of a Korean chef and restaurateur who has operated a traditional Japanese fine dining restaurant for decades, Kim served in the same executive chef role for almost four years in the Mizumi location at Wynn Palace on the Cotai Strip.

“At Wynn Palace, Mizumi is more authentic and traditional, very close to what you would expect when you’re actually in Japan,” Kim says. “Here in Las Vegas, we bring a more contemporary approach to it, still staying within those boundaries of authenticity. We don’t want to go crazy.”

Mizumi is about creating a full and robust cultural experience, the chef says, and it doesn’t matter if you’re in Las Vegas or Macau. “It shouldn’t just be about the food. One of my mentors in Macau always told me that the message you want to get across is important, but it’s more important how you deliver that message.” 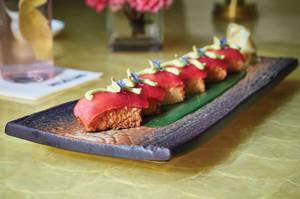 Kim has cooked everywhere from Seoul to Tokyo to Sydney during his quick rise in the culinary world. His father wanted him to pursue a different career, which is how Kim ended up in school in Australia, but the restaurant world kept calling.

“My dad is still in the kitchen at 72 years old screaming at people,” he jokes. “He didn’t want me to follow in his footsteps, because back in the day, being a chef meant having to work hard, long hours and not great earnings. A lot of Asian parents want their children to be doctors or lawyers or professors.

“But I found myself working in kitchens part time in Australia, and I enjoyed it. It was natural. I grew up in the restaurant with my dad. I eventually realized school isn’t really the place for me. The restaurant is where I belong, and when I made that phone call to my dad to tell him I wanted to come back and take up the career of becoming a chef, he didn’t want me to do it. But I was so determined.”

Kim returned to Korea and dedicated himself to the craft, working in his father’s restaurant for months without the two of them speaking to one another. “I had to prove that I was being serious about this and it wasn’t just a phase I was going through. Then he finally started teaching me.”

That dedication and patience shows in the chef’s style and approach to his new gig at Wynn Las Vegas, where he has been slowly incorporating some signature dishes at Mizumi, one of the Strip’s definitive Japanese restaurants since its debut in 2012. The offerings remain vast, including sushi, robatayaki, Japanese Wagyu A-5 beef, teppanyaki and more, and Kim has added intricate new plates like cold chawanmushi and steamed Jidori egg custard with grilled corn, snow peas and shiso flower; and sashimi usuzukuri with thinly sliced Japanese madai snapper, white soy and lime dressing, sesame seeds and konbu.

“I had to be a bit cautious, a little gentle in how I approach menu changes and stuff like that, [because] we have a lot of loyal customers who have been coming in for years and enjoying everything we have to offer,” Kim says. “I was a new kid on the block who wanted to break things down and then rebuild it with a different approach, so I had to be careful. It’s one baby step at a time rather than a facelift. If I need to take another 100 steps to get to where I want to be, as long as evolution is on the way, I think it’s OK. I know we’ll get there in the end.”