If anyone still had doubts about COVID-19 being the number one story on Wall Street this fall, the president’s diagnosis and hospitalization probably changed their minds.

The virus takes priority over everything else that’s going on in the market—you can see it playing out before us because it affects every area of our lives. Any related negative or positive development is likely to send the market reeling or rallying.

Remember, uncertainty is among the market’s worst enemies, and having the president hospitalized for a deadly virus less than a month before the election rings all the uncertainty bells. So consider strapping in for what could be a choppy week.

Despite that, markets rose last week for the first time in five and also moved higher today ahead of the opening bell as the president’s seemingly better health appeared to have stocks bouncing back. We got a scare Friday night and he seems to be doing better today with talk of possible discharge from the hospital, but volatility is likely to continue going back and forth.

Investors need to be on their toes. The market remains vulnerable to sudden moves based on election and virus headlines, especially without any cushion from major data or earnings this week.

In the latest virus headline, Regal Cinemas—the second-largest U.S. cinema chain—said it’s suspending operations at all U.S. locations, The Wall Street Journal reported. Around 45,000 jobs might be at risk media reports said, and this comes after a series of layoffs over the last two weeks that raised more economic fears.

Normally, a flight into so-called “risk-off” investments wouldn’t be surprising under these strange circumstances. Surprisingly, though, the market went against that particular precedent Friday and again early Monday.

Bonds and gold both fell to start the week. Volatility rose a bit, but not too aggressively. Meanwhile, the dollar—often thought of as a “safe haven” in rough times and sometimes a weight on stocks when it gains traction—gave up ground this morning.

What does this counterintuitive action among the “horsemen of risk” mean? It might reflect the two huge news items that wrapped up last week, namely Trump’s COVID diagnosis and a mediocre payrolls report. These both appeared to raise chances of Congress and the White House agreeing on fiscal stimulus. The president Tweeted from the hospital this weekend urging Congress to get something done. If it weren’t for stimulus hopes, the market probably wouldn’t be up.

A stimulus looked very unlikely as recently as a week ago, and suffered another blow last Thursday when the House voted on party lines to pass a Democratic bill that analysts said has no chance of passing in the Senate. Hopes for a bill this week are still just hopes, and the president’s illness reinforces fears of election uncertainty. Still, some investors appear to be hanging their hats on Congress finding a compromise.

By the way, if a stimulus does pass, remember there’s been a lot of market anticipation for one. This could set up a “buy the rumor, sell the news” scenario.

Speaking of selling, Friday’s weakness in the S&P 500 Index (SPX) took it down to a settlement below what had been seen by many analysts as a key support level at the 50-day moving average of 3361. Any close above the 50-day would perhaps be seen as a sign of strength. And speaking of moving averages, the Nasdaq (COMP)—which led the way down Friday—also finished just below the 50-day (see chart below).

Earnings season is still more than a week away, but investors are bracing for Delta Air Lines, Inc.’s (NYSE: DAL) results in a few days. The ISM non-manufacturing index is out later this morning and Fed minutes are due Wednesday, but otherwise, it’s a dull week from a data perspective.

So Where Were We?

Friday’s presidential diagnosis struck an initial across-the-board blow, but by the end of the day it was mainly the mega-cap Tech and Communication Services stocks taking the worst beating, That said, the 2% Nasdaq (COMP) retreat Friday might have reflected profit-taking more than anything else.

It’s also interesting that the Tech selloff wasn’t a broad one across the sector. Some of the “stay-at-home” names like Peloton Interactive Inc (NASDAQ: PTON) and Zoom Video Communications Inc (NASDAQ: ZM) generally did pretty well. This could reflect thoughts that virus-related shutdowns could keep people at home through the winter months. Anyway, it felt like a mixed message from Tech, and we’ll see if this bifurcation extends into the new week.

Also doing OK Friday were some of the sectors like Industrials and Materials that potentially would benefit if a stimulus package looks more likely. Even Energy got back on its horse after an early spill. Crude, however, was down for the count.

Small-caps, which can be very sensitive to the domestic economy, ended last week on the upswing and remain a solid barometer to measure peoples’ stimulus hopes. The Russell 2000 (RUT) index of small-caps is worth a close watch. Airlines appeared to get a bid Friday from stimulus talks, too. Meanwhile, Regeneron Pharmaceuticals Inc (NASDAQ: REGN) received a nice little aftermarket tune-up Friday from news of President Trump taking its COVID-19 treatment.

It’s also potentially significant that major indices closed well off their lows Friday. The Dow Jones Industrial Average ($DJI) actually reached positive territory for a while, and no major selloff took hold in the last hour, as some analysts had feared following the plunge at the open. Things basically stayed together instead of falling completely out of bed. All this could be a positive factor from a psychological standpoint today. 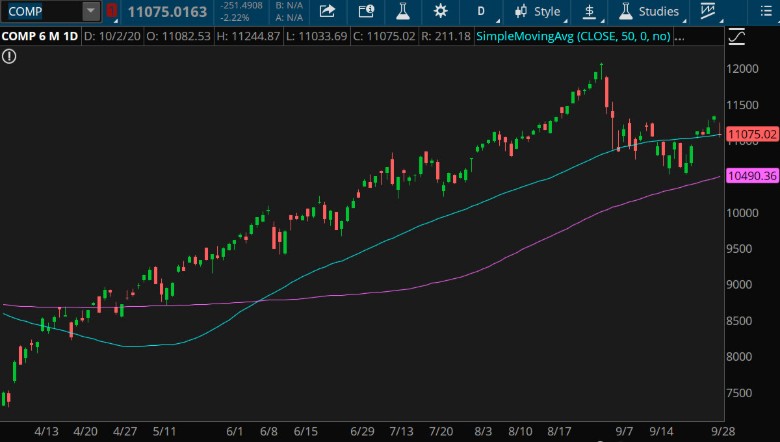 CHART OF THE DAY: WEAK TECH. The Nasdaq Composite (COMP – candlestick) tap danced around the 50-day moving average (blue line) Friday, and ultimately finished below the key technical point by a whopping two points. The COMP is still 85 points above the 100-day moving average (purple line). Data source: Nasdaq. Chart source: The thinkorswim® platform from TD Ameritrade. For illustrative purposes only. Past performance does not guarantee future results.

Guidance Still Lacking: Before we get to the election, there’s the little matter of earnings season. It starts next week when the big banks come out with their reports, and accelerates from there right into the teeth of voting. One thing investors often hope to get from earnings season has been in short supply this year: Guidance. That’s not necessarily changing when Q3 reporting season begins.

To date, 67 S&P 500 companies have issued EPS guidance for Q3 2020, which is 36% below the five-year average of 104, research firm FactSet reported last week. If 67 is the final number for the quarter, it will mark the second-lowest number of S&P 500 companies issuing EPS guidance for a quarter over the past 10 years, trailing only the record-low number of 53 in the previous quarter.

However, it will mark a 26% increase over the previous quarter, too. So that’s something. And there are two more weeks for more companies to deliver guidance, though at this point it doesn’t seem likely we’ll get a lot more.

This particular development hasn’t seemed to hurt those shares much, maybe because these kinds of political investigations into alleged monopolistic practices have simply become part of the scenery over the last half of a decade. They generally make a lot of noise, but haven’t really clipped anyone’s wings too much. Also, with the election ahead, some investors might see the news as more of a grandstanding tactic and less of a serious inquiry, though it’s never good to completely write these things off.

Institutional Insight: Though stocks generally seem highly valued compared with historical levels, there isn’t too much excitement among institutional investors now about going into government debt, either because yields remain so low, one analyst noted last week. This combination might be steering some pension and other big funds toward corporate bonds, meaning money that might otherwise have gone into stocks is potentially being diverted into the corporate debt market. Fears of pre-election volatility and the virus also might be driving this trend.

Highly rated companies issued more than $267 billion of bonds from July through September, according to data firm Dealogic, The Wall Street Journal reported. Below-investment-grade firms sold more than $119 billion. Those are both the largest amounts for that period in data going back to 1995. Companies have now issued more than $1.4 trillion of bonds in 2020. All this supply has driven yields down, as you might expect, but high-rated corporate bonds still enjoy an average 136-basis point advantage over U.S. Treasuries.

Remember that there is risk in holding corporate bonds, including possible default. That’s one reason corporate bond yields are generally higher than yields on government debt. There’s no free lunch, as the saying goes.

Photo by Ryan Johns on Unsplash

© 2020 Benzinga.com. Benzinga does not provide investment advice. All rights reserved.