Skip to content
By: Noble HorvathPosted on September 18, 2020
CLOSE

As the COVID-19 pandemic gathered steam, US lawmakers moved to protect newly unemployed Americans from evictions. But now, eviction freezes are set to expire on various dates before the end of the summer.

Riley Blair first spotted a pile of belongings outside of her apartment complex in early August, and she thought somebody surely would be back for them.

The Missouri State University student and her roommates went to investigate at an apartment along Battlefield Road in Springfield.

“We found, what looked like, an entire person’s apartment just dumped,” Blair told the News-Leader in a phone interview. “At first, we thought that maybe this was free stuff someone didn’t want, or somebody was moving and they’d make one trip and come back and get it.”

While an emergency declaration was made halting evictions through the rest of this year, the moratorium came too late for some Springfield tenants, and experts worry it may simply be delaying the inevitable for others.

President Donald Trump requested emergency action from the CDC Sept. 1 to halt evictions, and the CDC issued temporary guidelines for an eviction moratorium for private residences.

Blair and her roommates didn’t want to continue poking through the items, so they went about their day.

The contents of a home sit out on a driveway after an eviction in early December 2019. (Photo: Andrew Jansen/News-Leader)

“This is Springfield and anyone who wants to keep their things wouldn’t necessarily just trust in the ability to leave it for an hour,” she said.

Hours crept by, and Blair said she didn’t see anyone come by, so they went to the pile again.

“One of my roommates was convinced somebody had been evicted and didn’t know it yet,” Blair said.

Blair said they found electronics, personal documents like extensive medical bills and a phone. She was able to find the name of someone who she thought the items belonged to. She reached out to him through social media and he responded.

RELATED: Confusion over CARES Act eviction ban leaves some families on the brink of homelessness

“‘Yeah, I knew I was being evicted, but I didn’t know it would be that fast,'” Blair recalled the man telling her. “We asked him if there was anything he wanted or was important to him. It sounded like he was going through a rough time.”

The man said he had lost his job and car before being evicted.

“When I asked him if he was aware his stuff was in a pile in the parking lot, he said, ‘No, but I know why and there’s not really anything I can do about it,'” Blair said.

“’Yeah, I knew I was being evicted, but I didn’t know it would be that fast’ We asked him if there was anything he wanted or was important to him. It sounded like he was going through a rough time.”

All he asked was that they save his plaques celebrating 1 million miles driven as a truck driver, Blair said.

Despite it being much later that night, they were able to find the mementos.

“At that point, other people had absolutely been vultures,” Blair said. “We did manage to go back and grab a couple things he wanted. No one else was looking for trucking plaques.”

The rest was gone by the morning.

The man who was evicted did not respond to questions by News-Leader press time; however, online records show that he was evicted due to nonpayment of rent.

Although officials affiliated with the TLC Properties declined to give details surrounding the eviction, Angela Frizzell, marketing director for TLC Properties and Coryell Collaborative Group, said the renting company has attempted to work with its tenants throughout the pandemic, even without the moratorium.

“We have made accommodations with anyone who’s communicated with our leasing staff in providing documentation of layoff, furlough or difficulty making payments due to the crisis,” Frizzell said in a phone interview Sept. 10. “We’ve waived late fees, we’ve offered repayment agreements. There does come a point where we have to move forward if there’s no accommodations or effort made on behalf of those involved. We do have to work in the best way possible for all of our residents.”

“We’ve worked our hardest to be fair and consistent across all of our organizations.” 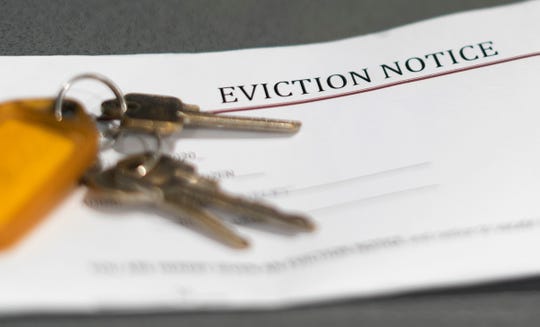 CDC is halting evictions, but that doesn’t mean rent is on hold

As of Aug. 24, there were more than 23 million cases of COVID-19 globally resulting in more than 800,000 deaths; more than 5.5 million cases have been identified in the United States, with new cases being reported daily and more than 174,000 deaths due to the disease. The moratorium is an attempt to slow the spread of COVID-19, according to the CDC’s order.

To stop evictions, health officials are relying on the 1944 Public Health Service Act, which gives the administration broad quarantine powers. The moratorium, which will run through Dec. 31, applies to individuals earning less than $99,000 a year who are unable to make rent or housing payments. It’s not clear how this moratorium affects landlords, who must continue to make their own payments.

Nationwide, 30-40 million renters are at risk of eviction, per the Aspen Institute, but those high numbers aren’t yet showing in Greene County. According to figures compiled by the Office of the State Court Administrator and provided by Circuit Clerk Tom Barr, the eviction totals spanning an eight-month period between January and August include:

The slightly lower numbers for this year may be due to the time period earlier this year when in-court proceedings were stopped, with some exceptions. But, evictions are still happening.

Austin Fax, a lawyer with Lowther Johnson Attorneys at Law, dove into the eviction moratorium during a webinar through the Springfield Metropolitan Bar Association on Sept. 10.

The contents of a home sit out on a driveway after an eviction in early December, 2019. (Photo: Andrew Jansen/News-Leader)

If a tenant violates their lease due to criminal activity on the premises, threatening the health or safety of other residents, threatening to damage the property, violating applicable building codes or violating any other contractual obligation other than the timely payment of rent, nothing is stopping a landlord from evicting them.

The CDC doesn’t say that a landlord can’t file a lawsuit against a tenant, Fax said. Tenants are faced with the responsibility.

“They don’t give you any guidance,” Fax said. “There are going to be periods where people will be in limbo.”

Fax said this moratorium does not apply to hotels, motels, inns, villas and temporary or seasonal tenants.

“If you’re renting a VRBO or nightly rentals or anything like that, then these CDC guidelines don’t apply to you and you can go ahead and evict people just as you would have before COVID hit,” Fax said.

The CARES Act previously applied to federally subsidized or federally backed housing. This is no longer the case with the latest moratorium, Fax said.

“Just presume it’s going to apply to you,” Fax said.

No federal help coming yet, but there is local aid available

Community Partnership of the Ozarks Director of Community Collaboratives Justin Lockhart was also one of the speakers during the Sept. 10 webinar.

Earlier this week, Lockhart told the News-Leader that he fears the lack of information that comes with this moratorium.

“Late last week, we were scrambling to understand everything,” Lockhart said in a phone interview. “It prevents evictions for nonpayment, but we have a ton of concern for this just kicking the can down the road. If we have a tenant is not able to pay their rent right now, it essentially says you can’t get evicted, but there’s not the assistance to go with it.”

Due to late fees, penalties and other factors, Lockhart believes Greene County could experience a surge of people losing housing in January 2021.

“We could see that tsunami of evictions,” he said.

“If we have a tenant is not able to pay their rent right now, it essentially says you can’t get evicted, but there’s not the assistance to go with it.”

Yes, eviction numbers are down, but Lockhart said agencies are working “from behind” on this issue.

“We don’t have confidence that that funding will still be available when the moratorium ends. If no new funding comes in, I think we could really see a huge wave of evictions hit in early 2021,” Lockhart said.

There is help available for residents of Springfield.

“Right now, there is assistance for those who qualify, so we’re just trying to push that message out to please just call if you’re struggling,” Lockhart said. “We really want to get the word out that this halt on evictions does not mean you do not have to pay your rent. And, if you do not pay your rent, interest and penalties and late fees can still be assessed during this whole time.”

“It’s not like your monthly rent is not due. It is not going away,” he continued. “It’s still there, and it’s still owed.”

Here’s who to call if you are struggling to pay rent or mortgage due to COVID-19, live in Springfield and meet income guidelines: