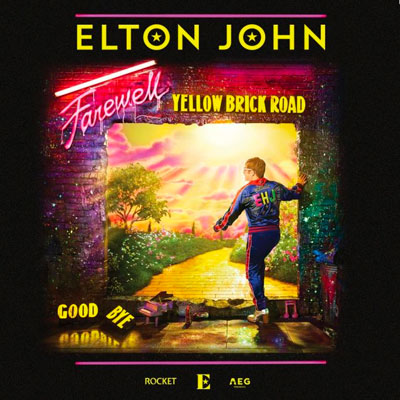 (NEWARK, NJ) — Elton John has rescheduled dates for his award-winning, global Farewell Yellow Brick Road Tour to kick off in North America on January 19, 2022, in New Orleans, making stops in major markets, including Houston, Chicago, Toronto, New York, Miami and more. Locally, the tour comes to the Prudential Center in Newark on February 25, 2022 following a pair of shows at Madison Square Garden (February 22-23) and before a pair of shows at Barclays Center in Brooklyn (March 1-2).  He also has a pair of shows at Nassau Coliseum in Long Island (March 5-6).

The North American dates follow his recently announced dates in Europe, which begin September 1, 2021 in Berlin . The latest dates on sale are arena shows which were rescheduled due to the COVID-19 pandemic. The Farewell Yellow Brick Road Tour will conclude with a series of select stadium performances taking place worldwide.

Taking to social media, Elton John said, “I’ve been enjoying my time at home with the family while the world navigates its way through the COVID pandemic. But, I really miss being on the road and performing for my beloved fans in my Farewell Yellow Brick Road Tour. While the scientists are making great progress, we are making big plans for a return to touring that will allow us to ensure the health and safety of everyone. I will be starting my tour again in Europe and the UK in the Fall of 2021. And I will be back in North America starting in January 2022.  This means my New Zealand dates will be postponed until 2023. Don’t worry about me.  I’m using my downtime to keep myself fighting fit and healthier than ever. I’m raring to go! As always, thank you so much for your loyal support. I look forward to seeing all you wonderful Elton John fans soon. In the meantime, please stay safe and be well. Thank you!”

Winning the 2020 iHeartRadio Music Award for “Tour Of The Year,” 2020 Pollstar “Major Tour of the Year” and the 2019 Billboard Music Award for the “Top Rock Tour,” the Farewell Yellow Brick Road Tour kicked off to a sold-out crowd on September 8, 2018 in Allentown, PA and has since received rave reviews around the world. The critically acclaimed show takes the audience on a magical journey through his incredible 50-year career with never-before-seen-photos and videos, all set to the tune of some of Elton’s most beloved songs from his legendary catalog including, “Bennie and the Jets,” “Rocket Man,” “Tiny Dancer,” and “Philadelphia Freedom.”

Elton’s career achievements to date are unsurpassed in their breadth and longevity as the number 1 top-performing solo male artist. Elton is one of the top-selling solo artists of all time, with 1 diamond, 38 platinum or multi-platinum, and 26 gold albums, over 50 Top 40 hits, and he has sold more than 300 million records worldwide. He holds the record for the biggest-selling single of all time, “Candle in the Wind 1997”, which sold over 33 million copies. ‘Diamonds’ the Ultimate Greatest Hits album, reached the Top 5 of the UK album charts on its release in November 2017, becoming Elton’s 40th UK Top 40 album in the process. This release celebrated 50 years of his songwriting partnership with Bernie Taupin. August 2018 saw Elton named as the most successful male solo artist in Billboard Hot 100 chart history, having logged 67 entries, including nine No. 1s and 27 Top 10s.

The article continues after this ad

Elton announced the ‘Farewell Yellow Brick Road’ tour at New York’s Gotham Hall in January 2018. Encompassing 5 continents and over 350 dates, this 3-year-long tour started in September 2018 and marks his retirement from touring after more than 50 years on the road. In May 2019, it was named Billboard’s Top Rock Tour. To date, Elton has delivered more than 4,000 performances in more than 80 countries since launching his first tour in 1970.

2019 saw the release of Rocketman to great critical and commercial success with nearly $200 million at the box office, a fantasy musical motion picture of his life, which has won an Academy Award and two Golden Globe Awards, including Best Original Song. Plus, his much-anticipated autobiography Me, which was released on October 15, 2019.

Among the many awards and honors bestowed upon him are; six GRAMMYs, including a GRAMMY Legend Award, a TONY, two OSCARS, two Golden Globe Awards, a Best British Male Artist BRIT Award, induction into the Rock and Roll Hall of Fame, and the Songwriters Hall of Fame, the Kennedy Center Honor, Legend of Live Award, 13 Ivor Novello Awards between 1973 and 2001and a knighthood from HM Queen Elizabeth II for “services to music and charitable services.” In 2019, HM Queen Elizabeth II awarded him the “Companion of Honour,” a prestigious award given only to those who have made major contributions in arts, science, medicine, or government. Elton John became one of only 65 people who can hold this honor at one time.

In 1992, Elton established the Elton John AIDS Foundation, which today is one of the leading non-profit HIV/AIDS organizations and has raised over $450 million to date in the global fight against HIV/AIDS. In June 2019, President Emmanuel Macron presented Elton the Légion d’Honneur, France’s highest award, for his lifetime contribution to the arts and the fight against HIV/AIDS.

Ticketholders for all postponed performances will receive new event information shortly and all original tickets will be honored at the rescheduled performances.

North American dates are as follows: