© Chris Pietsch/The Register-Guard
Firefighters with Grayback Forestry Inc. out of White City, Ore. stand watch on a burnout fire along the southwest edge of the Holiday Farm Fire Sept. 17, 2020 as firefighters work to gain the upper hand on the fire that is burning along the McKenzie River east of Springfield, Ore.

By the numbers, Saturday

Details about Holiday Farm Fire resources, as of Saturday, via the Oregon Department of Forestry Incident Management Team:

Evacuation canceled for Thurston, downgraded for some Highway 126 areas

The Level 1 (“be ready”) evacuation notice for the Thurston area has been canceled, Lane County announced Friday afternoon.

The Level 3 (“go now”) evacuation notice has been downgraded to a Level 2 (“be set”) for the remaining residents along Deerhorn Road. Deerhorn Road remains closed to all traffic except residents, according to a county news release.

The Level 3 evacuation notice has been downgraded to a Level 2 for residents along the Highway 126 corridor to milepost 23.75 (just west of the Leaburg Dam) with the exception of Mountain View Lane beyond the intersection with Lure Lane.

Residents accessing reopened areas are asked to avoid barricaded locations for their own safety. Fire-damaged structures can be extremely hazardous and the county advises residents to have professionals assess and deal with damaged areas once those areas open for return.See more at lanecounty.org/mckenziefire_resources.

Residents should be aware that the change to Level 2 reflects that fire danger has only subsided in that area enough to allow residents access to the area so they can make additional preparations for their homes, livestock or other animals, according to the county. They should expect that if fire behavior increases these areas may return to Level 3 and residents must be able to leave again at a moment’s notice.

Level 2 means there is significant danger and residents should either voluntarily relocate or be ready to evacuate at a moment’s notice. Emergency responders may not have time to provide additional notice if danger increases, according to the county news release.

The National Weather Service reported 0.95 inches of precipitation Thursday and the Lane Regional Air Protection Agency reported an Air Quality Index of 74 at 11 a.m. Friday as Lane County was finally able to breathe a little easier after days of unhealthy air brought by the Holiday Farm Fire.

Friday afternoon LRAPA was predicting an AQI in the “moderate” range Saturday for Eugene, Springfield and Cottage Grove and “unhealthy” for Oakridge.

By the numbers, Friday

Details about Holiday Farm Fire resources, as of Friday, via the Oregon Department of Forestry Incident Management Team:

Due to recent rain and more expected the entire Ridgeline Park system and Skinner Butte Summit in downtown Eugene have been reopened today, the city of Eugene Parks and Open Space Division said in a news release.

Although the fire danger level has been downgraded from extreme to high, the risk of wildfire remains and fire resources are stretched thin, according to the release. The public is asked to strictly adhere to the no open fires, no fireworks, and no smoking rules that apply to all of Eugene’s parks and natural areas.

DeFazio later spoke at Thurston Middle School about the rush to remove hazardous waste from the fire to prevent leeching and water contamination into the McKenzie River — Eugene’s main source of drinking water — that must happen over the next few weeks.

On the fire lines of the Holiday Farm Fire

DeFazio remarked that McKenzie High School is “pretty much all that’s left in Blue River” and that this easily could have been like the 2018 Camp Fire in Paradise, Calif.

O’Hare recapped the wraparound services that are being provided to evacuees at this point and how to register with FEMA as soon as possible. Buch reminded people o the hazard of trying to return to the burn site and how traffic in the area hinders active firefighting efforts.

“I want to prepare the community for when they do eventually get to see the land again. It will be very different from what they originally remember the Mckenzie River corridor to look like,” Buch said.

Non-essential activity suspended at Holiday Farm Fire ahead of storm

Due to possible hazardous weather conditions, including rain, wind, potential lightning and hail, operations are suspended for all utility companies and non-essential people entering the Level 3 evacuation area and all areas within the fire footprint starting at 6 p.m. Thursday, according to a press release from the Oregon Department of Forestry.

The suspension is in effect until 6 p.m. Friday. Depending on weather conditions the suspension of activity may be extended in 24-hour increments, the release said.

Officials are concerned about fire-weakened trees and rocks falling into the roadway or other areas. Homeowners who have chosen not to evacuate are directed to remain at home or evacuate during this weather event and not travel the road system within the fire perimeter, the release said. Previously issued road access permits may be temporarily suspended and access denied during these periods.

No utility crews except those directly related to the Highway 126 snagging operation or Leaburg Dam operations will be allowed in the fire areas during this time.

The weather may also dictate the number of fire resources assigned to the fire, according to the forestry department.

Lane Transit District is operating a shuttle service for Holiday Farm Fire evacuees who need to travel between their hotels and the Lane County Fairgrounds for services.

Each shuttle passenger will be given a contact information RideSource Card.

Shuttle A will serve:

Shuttle B will serve:

Passengers staying at the Hilton Garden Inn can coordinate their pickup by calling 541-501-9399.

A present for firefighters

How to limit the air quality effects of ash cleanup

Wildfire smoke from the Holiday Farm Fire and other fires in Oregon and California brought ash to much of Lane County. Ash is made up of tiny particles (dust, dirt and soot) that may be inhaled if it becomes airborne.

It’s important to take correct action during cleanup to protect your health and your local air quality, according to a news release from the Lane Regional Air Protection Agency.

The agency recommended the following tips for cleanup and disposal:

Do not use a leaf blower: Blowers move fine particles around and return them to the air, creating additional health concerns.

Cleanup: Avoid stirring up or sifting through ash as much as you can. Avoid actions that kick ash particles up into the air, such as vigorous dry sweeping. Before sweeping hard surfaces, mist them with water to keep dust down. Follow with wet mopping. Use a damp cloth or wet mop on lightly dusted areas. When you wet down ash, use as little water as you can.

Vacuum: Use a high-efficiency particulate air (HEPA)-type vacuum to clean dusty surfaces. Don’t use a typical household vacuum or a shop vacuum without a HEPA filter. They will send the collected dust or ash out into the air.

Disposal: Collected ash may be disposed of in the regular trash. Ash should be stored in plastic bags or other containers to prevent it from being stirred up. If you suspect asbestos is present, contact LRAPA staff for abatement guidance: [email protected] or 541-736-1056. Do not wash ash into storm drains.

The Level 3 (“go now”) evacuation level for certain residents in the McKenzie Bridge area has been downgraded to a Level 2 (“be set”), Lane County government said in a news release Thursday.

Residents should be aware that the change to Level 2 reflects that fire danger has only subsided in that area enough to allow residents access to the area so they can make additional preparations for their homes, livestock or other animals. They should expect that if fire behavior increases these areas may return to Level 3 and residents must be able to leave again at a moment’s notice.

Level 2 means there is significant danger to your area and residents should either voluntarily relocate to a shelter or with family/friends outside of the affected area and be ready to evacuate at a moment’s notice. Emergency responders may not have time to provide additional notice if danger increases.

Lane County’s non-emergency call center for residents affected by the Holiday Farm Fire is adjusting its hours to 7 a.m. to 7 p.m. daily beginning Thursday, due to a decreasing call volume in the evening hours. Previously, the call center was available until 10 p.m.

Those with properties within the fire perimeter may call 541-682-3977 for information about their residences in the area, as well as to make other inquiries related to the fire, Lane County announced in a news release. Lane County Emergency Management and public safety partners continue to perform structural assessments on homes within the fire perimeter, and an initial collection of assessment information is available.

A Multi-Agency Resource Center is also available for those whose homes are affected by the wildfire. The MARC is open Wednesday, Thursday and Friday this week from noon to 7 p.m. at the Lane Events Center, 796 W. 13th Ave. The center includes representatives from utility companies, Lane County elections, insurance companies, housing support agencies, Senior and Disabled Services, Environmental Health, Lane County Assessment and Taxation, waste and debris disposal coordinators, permit and land management staff, faith-based services and support, as well as mental health and medical support.

In-person crisis support with Lane County Behavioral Health: The Graduate Hotel, 66 E. Sixth Ave, Monday through Friday from 10 a.m. to 1 p.m. and from 2 p.m. to 5 p.m.

The Walterville Post Office is open and also receiving mail for the Blue River and Vida locations. The Marcola Post Office is also operating as normal. United States Postal Service mail from fire-affected areas is no longer being diverted to the Springfield post office.

Mon Sep 21 , 2020
Most of the flooding in the county was seen along Highway 176 going towards I-95 and Highway 301. ORANGEBURG, S.C. — Orangeburg County experienced a “significant” amount of rain for most of the day Thursday causing flooding across the area. Since early Thursday morning, much of the Midlands have seen […] 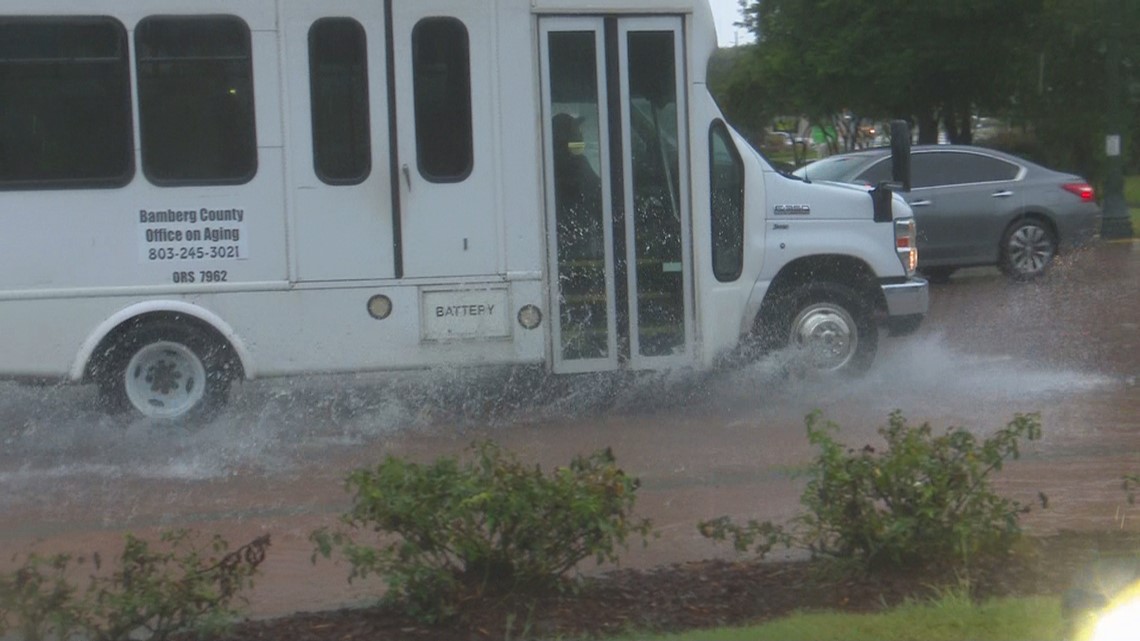