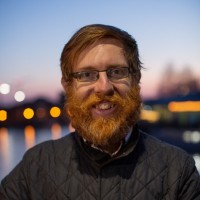 Two former regional daily colleagues have publicised a new travel guide to their patch by leaving copies in the unusual places featured in it.

Author Martin Booth and photographer Barbara Evripidou, who worked together on the Bristol Post, have collaborated to produce 111 Places in Bristol That You Shouldn’t Miss.

The book is part of a global series of city guides that aim to showcase places not usually featured in guidebooks – with Bristol’s featuring everything from Victorian toilets to a skateboard park found in an old swimming pool.

To promote the book, Martin cycled across Bristol and left books in locations featured in the guide, offering clues on social media using the hashtag #111Bristol.

He said: “Don’t get me wrong, I love the Clifton Suspension Bridge and the SS Great Britain, and other landmarks in Bristol not designed by Isambard Kingdom Brunel.

“But this guidebook aims to feature places not in other guidebooks.

“Barbara and I have enjoyed exploring the routes of our city less travelled, and I am especially pleased that the likes of Avonmouth, Bedminster Down, Knowle West and Speedwell – among many others – are featured.”

Martin, pictured, began his career as a reporter at the Watford Observer before moving to Bristol where he and Barbara worked together on the Post.

Martin is now the editor of news website Bristol24/7 while Barbara continues to work as a freelance photographer for the Post.

Barbara said: “I hope that this book will allow you to find the hidden places, stories, shops and neighbourhoods that unlock Bristol’s true character, history and flavour.”

The book is available now, published by Emons.