Skip to content
By: Noble HorvathPosted on September 16, 2020
CLOSE

Hikers can find five waterfalls along a 5-mile stretch of the Black River near Lake Superior in Michigan’s Upper Peninsula.

The Porcupine Mountains in Michigan’s Upper Peninsula are a popular destination for their scenic views of dense hardwood forest, Lake Superior and a handful of waterfalls.

But less than 10 miles west of the popular park is a more accessible and more hidden — but just as beautiful — gem: the Black River Scenic Byway.

Stretching for 11 miles through the Ottawa National Forest from north of Bessemer to Lake Superior, the byway (County Road 513) provides access to five waterfalls in the Black River Harbor Recreation Area.

The waterfalls make for an almost perfect choose-your-own-adventure style day trip, with parking lots near each waterfall allowing for easy access to each, plus the North Country Trail linking all of them for more ambitious hikers.

The southernmost waterfall is the 20-foot Great Conglomerate Falls, named for the large slab of brown conglomerate rock — a mixture of volcanic rock fragments — that splits the waterfall into two cascades. 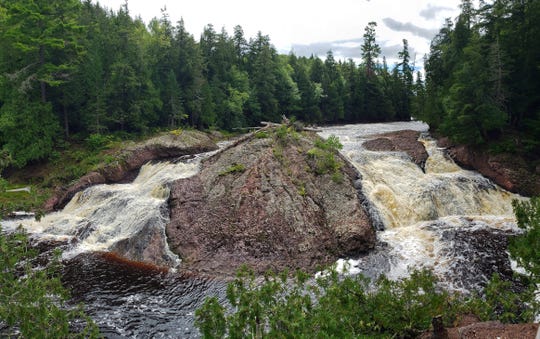 Old-growth hemlocks, pines and hardwoods line the river’s rocky banks, which would make for an even more spectacular scene when the leaves change in the fall.

Great Conglomerate Falls is about a 3/4-mile hike from the parking lot on the byway, or just over a 1/4-mile hike along the North Country Trail from the next waterfall, Potawatomi Falls.

Potawatomi is the easiest to access of the bunch, with a 600-foot accessible paved trail leading from a parking lot to an overlook above the wide 30-foot cascade. 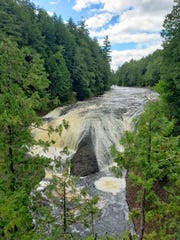 That parking lot also provides access to the next waterfall, 25-foot Gorge Falls, named for the narrow passage in the rock that the river squeezes through before dropping sharply into a pool.

Potawatomi and Gorge are the most kid-friendly falls of the Black River bunch, as the others require longer hikes that include steep staircases.

That includes the next waterfall, Sandstone. At just 15 feet, it’s the smallest of the five falls, but it’s the only one you can climb right up next to on the river’s banks.

A gravel path leads to stairs that drop you along the shore of the river. From there, you can climb and walk on the conglomerate rock to stand close enough to the falls to feel its spray.

The final waterfall is 30-foot Rainbow Falls, the only one of the group that is accessible from both sides of the river.

A short trail and a heart-pounding number of stairs lead down to a viewing platform almost directly on top of the falls on the west side of the river.

A viewing platform on the west side of the Black River provides a spot for taking in Rainbow Falls, a 30-foot waterfall in the Black River Harbor Recreation Area in the Ottawa National Forest in MIchigan’s Upper Peninsula. (Photo: Chelsey Lewis/Milwaukee Journal Sentinel)

But the better view is from the North Country Trail on the east side of the river.

To get there, follow the byway until it dead-ends at the Black River Harbor on Lake Superior. From the parking lot, follow the paved trail over a 210-foot suspension bridge ­— built by the CCC from 1938 to 1939 — to the east side of the Black River.

From there, you can follow a trail to a beach along Lake Superior or hike about 3/4 of a mile south along the North Country Trail for a better view of Rainbow Falls. After the waterfall the trail turns east, so you’ll need to retrace your steps back to your car at the harbor. 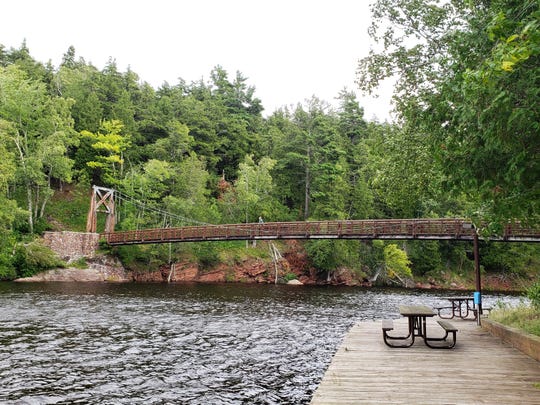 For those wanting to hike the entire stretch of waterfalls, it’s about 3 miles along the North Country Trail from the west side of Rainbow Falls, the northernmost, to Great Conglomerate, the southernmost. Both Rainbow and Great Conglomerate require at least a half-mile hike in from their respective parking lots, so an out-and-back hike of the entire stretch would be about 7 miles. Some of that includes steep stairs and rocky, root-covered trail, so plan and pack for a full day of hiking if you want to take on that challenge.

More information: All of the waterfalls are within the Black River Harbor Recreation Area, which is part of the Ottawa National Forest. The main parking area requires a $5 day pass per vehicle, payable at the parking lot.

The recreation area has a campground with 23 reservable sites and 17 first come, first served sites. Reservations are available six months in advance on Recreation.gov or by calling 877-444-6777.

The start of the scenic byway is about 9 miles northeast of Hurley. Bessemer, Mich., is the closest town, about 4 miles to the southeast.

RELATED: When fall colors could peak in Wisconsin in 2020

Our subscribers make this reporting possible. Please consider supporting local journalism by subscribing to the Journal Sentinel at jsonline.com/deal.