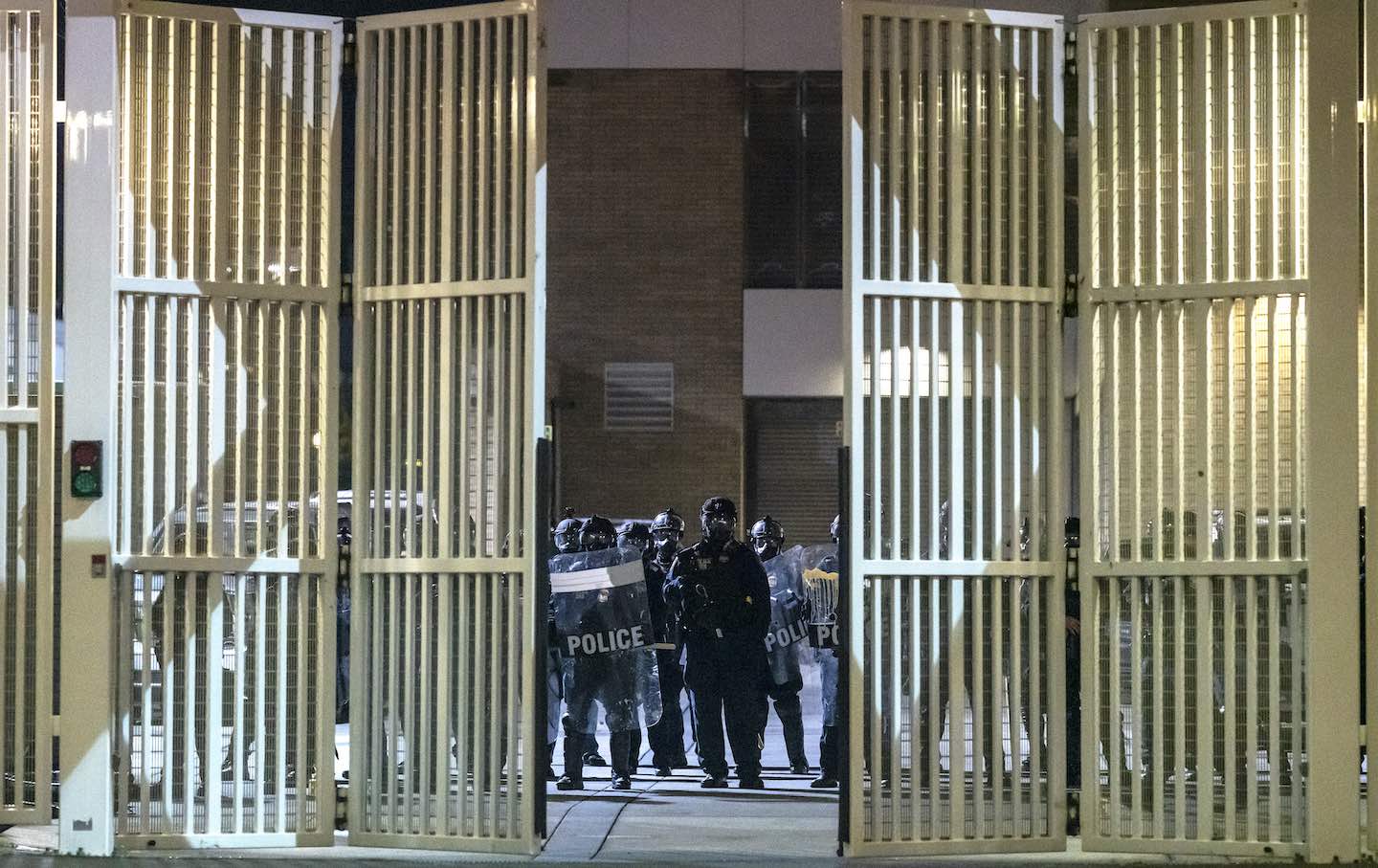 Federal officers guard the front gate of the Immigration and Customs Enforcement detention center during a protest on September 18, 2020, in Portland, Ore. (Nathan Howard / Getty Images)

Thank you for signing up. For more from The Nation, check out our latest issue.

The Nation is reader supported: Chip in $10 or more to help us continue to write about the issues that matter.

Thank you for signing up. For more from The Nation, check out our latest issue.

Travel With The Nation

Be the first to hear about Nation Travels destinations, and explore the world with kindred spirits.

Did you know you can support The Nation by drinking wine?

This summer, Portland looked like a war zone. Phalanxes of shadowy law enforcement personnel fired crowd-control munitions, as plumes of teargas billowed into the sky. Federal agents without clearly visible identification rounded up protesters and loaded them into unmarked cars, on American streets. When videos began to spread online, it was hard to tell what was going on, or how widely.

The public backlash was ferocious, spurring Congress to demand that the Department of Homeland Security (DHS) disclose information about the operation. But the DHS never came clean to the public about the full extent of its intelligence operations in Portland, which consisted of clandestine activities including interceptions of protesters’ phone calls conducted by a task force that included federal agencies besides the DHS, according to two former intelligence officers familiar with the matter.

“Unidentified stormtroopers. Unmarked cars. Kidnapping protesters and causing severe injuries in response to graffiti. These are not the actions of a democratic republic. [Department of Homeland Security’s] actions in Portland undermine its mission,” House Speaker Nancy Pelosi tweeted in mid-July. Later that month, The Washington Post reported that the DHS’s intelligence division, the Office of Intelligence and Analysis (I&A) had generated intelligence reports on several prominent journalists covering the Portland protests. Members of both the House and Senate intelligence committees promptly demanded to know what kinds of intelligence they had collected on both journalists and protesters. A letter from the Senate contained the suggestive admonition that the division “is obligated by statute to keep the congressional intelligence committees fully and currently informed of its operations.”

Yet, at the time of this writing, DHS has failed to respond to Congress’s questions. “Notwithstanding the selective and incomplete document production thus far, the Committee has reason to believe that DHS and I&A are withholding responsive records related to I&A’s activities in Portland and in support of DHS’ response to nationwide protests,” House Intelligence Committee Chair Adam Schiff wrote in a letter to the DHS’s intelligence branch.

A storm in portland

This is not to say that the DHS did not respond to the public furor. Shortly after Congress’s initial requests, DHS shocked the national security world by removing its high-ranking undersecretary of intelligence, Brian Murphy. Murphy had served as chief of I&A, the wing of the DHS that is a member of the rarefied Intelligence Community and is authorized to handle highly classified information about security threats to the domestic United States. Though Murphy’s removal appeared to mollify Congress, the public narrative that he had been removed for the intelligence reports on journalists struck some intelligence officials as dubious.

“He did not get reassigned over some unclassified program,” a former senior DHS I&A intelligence officer who has served under Murphy told The Nation. “That is a convenient story, but that isn’t what’s going on.”

Unlike more sensitive, classified intelligence, the journalist reports were based entirely on publicly available information. And while privacy rules generally prevent “US persons” from being the subject of intelligence assessments, it is still not uncommon. “That kind of shit happens all the time,” the former intelligence officer explained.

The early narrative became all the more dubious when Murphy filed a whistleblower complaint with Congress alleging retaliation by the department. According to the complaint, the reason Murphy had been reassigned was not what happened in Portland but a series of earlier whistleblower complaints he had filed alleging that he had been pressured to manipulate intelligence. This is alleged to have included DHS leadership’s asking Murphy to manufacture intelligence about terrorists entering the United States through the southern border and to block intelligence assessments focusing on threats from white supremacists and from Russia. (The Nation has reported on the difficulties described by DHS officials in monitoring white supremacists.)

“A guy like Brian Murphy, you’re not going to ruin his career and drag him through the mud over some bullshit,” the former intelligence officer said. According to him, multiple federal agencies, from the DHS to the FBI, asked if any intelligence officials would volunteer to be deployed; but when DHS I&A sought volunteers to deploy to Portland during an all-hands call, it was not met with enthusiasm.

A current FBI official described a similar call for volunteers to respond to civil unrest this summer, agreeing that it was extremely unusual. “This is the first time I’ve seen volunteer requests for…another field office,” the source said.

A current DHS official described a colleague with expertise in electronic surveillance who was being deployed to Portland. But for what purpose? “Extracting information from protester’s phones,” the DHS official said. While in Portland, an interagency task force involving DHS and the Justice Department used a sophisticated cell phone cloning attack—the details of which remain classified—to intercept protesters’ phone communications, according to two former intelligence officers familiar with the matter.

Cell phone cloning involves stealing a phone’s unique identifiers and copying them to another device in order to intercept the communications received by the original device. The former intelligence officials described it as part of a “Low Level Voice Intercept” operation, declining to go into further detail—one of them citing the sensitive nature of the surveillance tool and the other an ongoing leak investigation within I&A.

“You’re getting an inside view into your targets, who they are, who they’re talking to—the hierarchy,” the former intelligence officer said, explaining that many within the DHS believe that antifa is an organized group—as opposed to the largely spontaneous, decentralized ideological tendency that most experts, including Trump’s own FBI director, believe it is. DHS intelligence has even found some limited evidence, which he considered thin, of foreign sponsorship. Attorney General William Barr, however, recently claimed that antifa is receiving foreign sponsorship—a necessary criterion to formally designating it a terror organization, which President Trump vowed to do in July. (The Nation recently reported on DHS intelligence’s attempts to tie antifa to Kurdish militant groups in Syria.)

“Signals intelligence collection would not be useful for preventing opportunistic looting or violent confrontations. It presumes the existence of coordinated, purposeful, and unlawful activity that is conducted through electronic means,” said Steven Aftergood, who heads the Federation of American Scientists’ Project on Government Secrecy. “The general concern is that DHS treated mass public protests—not just violent individuals—as suspicious and targets of investigation, or worse.”

While it wasn’t clear which individuals had specifically been targeted in Portland, both former intelligence officers agreed that it had violated protocol. “They were abusing people’s rights,” one said.

In addition to signals intelligence collection, the Portland operation involved clandestine aspects, according to the former intelligence officer. This appears consistent with a tip received this summer. Several members of the US Marshals Service (USMS)—part of the Justice Department—sent to Portland claimed to be affiliated with a private firm called “Strategic Oil,” according to travel records obtained by The Nation. While they did not identify themselves as law enforcement, the travel records contain information indicating that they were marshals, including that they were given a special discount for federal government employees. Clandestine methods tend to be used only for the most sensitive operations, more commonly overseas than domestically. (The Justice Department did not respond to multiple requests for comment.)

Travel records did not reflect that the DHS was using any sort of cover story in Portland. One of the biggest misconceptions about the Portland operation was that the DHS took the lead, the former intelligence officer said, explaining that the Justice Department played a major role. While he didn’t dispute that Murphy oversaw the DHS I&A’s segment of the task force, he said the Justice Department—especially the USMS but also the FBI—played a far more significant role. “It was clear that he [Murphy] was directed from higher up,” he said.

A current DHS official described how a colleague who was being deployed to Portland had alluded to using the Drug Enforcement Agency (DEA), part of the Justice Department, for the purposes of accessing protesters’ phones. “He said he needed some sort of ‘special key’ in order to …. He said that DEA has that capability and vaguely alluded to possibly borrowing or using one from another agency once he got to Portland.”

In June, Buzzfeed News reported that the DEA had been authorized to conduct covert surveillance of protesters involved in demonstrations against the police killing of George Floyd. Then in August, the USMS confirmed that it had conducted aerial surveillance over the Portland protests. The former intelligence officers agreed that the Low Level Voice Intercept operation had been conducted on the ground, was far more invasive than aerial surveillance, and involved equipment that I&A did not have access to.

“[There were] at least two federal agencies and there was some spooky shit going on,” one former intelligence officer said of the Portland operation.

Attorney General Barr has repeatedly echoed President Trump’s rhetoric on antifa. After President Trump alleged without evidence that a plane full of violent protesters had been traversing the country, Barr claimed that the Justice Department had received similar reports of violent protesters traveling from all over the country to sow mayhem. Last week, Barr urged federal prosecutors to consider charging violent protesters with sedition, a rarely used charge for people conspiring to overthrow the government. This week, Barr designated New York, Portland, and Seattle as “anarchist” jurisdictions—a term often used interchangeably with antifa.

“When the president makes the kind of statements he does on the news, you know that you have tacit approval,” the former intelligence officer said. “You just need a wink from your supervisor.”