The Washington State Department of Natural Resources is extending the closure of all of the lands it manages east of the Cascades to recreation due to high fire danger through Thursday.

DNR staff will evaluate the possibility of extending the closure as the next week progresses.

Critical wildfire danger and ongoing fires in the area warranted the extension of the closure, as Labor Day saw a rash of new fires ignite all around the state.

Below-normal precipitation and above-normal temperatures for the DNR’s Northeast and Southeast region is forecast to continue, with hot and dry weather further extending risk of large wildfires east of the Cascades.

DNR will announce the reopening of its public lands to recreation when it again becomes safe to do so. The statewide moratorium on timber harvest activities on DNR-managed lands is expected to lift by Friday.

Hunters with concerns about their tags should contact WDFW.

The University of Idaho-Coeur d’Alene and partners from the Our Gem Collaborative will host a four-part virtual speaker series addressing lake health starting Tuesday.

The Zoom sessions are part of a bigger effort to bring experts and entities together to protect Lake Coeur d’Alene and to promote education and conversation regarding water quality.

Register for the events at uidaho.edu/cda/outreach/cwrc/our-gem.

In the coming weeks, recreation sites and services will be closing for the season on the St. Joe Ranger District of the Idaho Panhandle National Forests. Visitors are urged to plan ahead when traveling to the district this fall, and to prepare for closures by making alternate arrangements if needed.

Recreation sites were kept open longer into the fall this year to accommodate a sharp increase in visitation this season. The Forest Service asks all visitors to pack out whatever trash or items are packed in and to help keep our public lands clean and beautiful for everyone to enjoy.

All water systems and the Upper Landing RV dump station will close after Tuesday. Mammoth Springs campground will close Sept. 28, while Emerald Creek and Cedar Creek campgrounds will close on Oct. 5, meaning the gates will be locked and no services will be available until next spring. All other campgrounds on the district will remain open until Monday, Oct. 19, weather permitting.

Two archery hunters were attacked Wednesday morning after what they described as a surprise encounter with a sow grizzly bear with cubs in the Apache Ridge area of the Upper Pack River drainage north of Sandpoint. One of the men was injured and has been released from the hospital with stitches.

The hunters reported deploying bear spray during the attack. Both men were able to walk out of the backcountry. Fish and Game Conservation Officers are in the process of investigating the incident.

People recreating in the Upper Pack River drainage, including the Harrison Lake area, are advised to use caution. Black bears and grizzly bears both inhabit the Selkirk Mountains and forest users should always be prepared for bear encounters.

IDFG recommends carrying bear spray in grizzly country, which includes all of Game Management Unit 1 in the Panhandle.

For more information on living and recreating in bear country, visit idfg.idaho.gov/conservation/grizzly-bears.

Two grizzly bears were euthanized after multiple conflicts in campsites and at residences near West Yellowstone.

Conflicts with the two subadult grizzlies – a male and a female – began in 2019. Montana Fish, Wildlife & Parks staff worked to haze the bears then, and at the time, the efforts to move them away from residential areas was thought to be successful.

Problems with the bears started again on Aug. 5, and by the time they were last captured on Sept. 1, there were 15 reports of two bears being in campgrounds at night, inside porches and on steps, where they were able to access garbage and dog food.

FWP bear specialists set cameras and noise alarms at two sites where the bears gained access to garbage. When those hazing efforts were unsuccessful, the specialists set traps for the bears on Aug. 15, and both were captured a day later. FWP, the U.S. Fish & Wildlife Service (USFWS) and the U.S. Forest Service agreed to relocate and release the bears due to their young age and because this was their first time being captured. Both bears were fitted with ear tags and satellite collars and released.

The bears then returned to the area where the conflicts had occurred previously, and On Aug. 25, the problems resumed, including the bears getting into an occupied tent, as well as a storage compartment on an RV. FWP captured both bears again on Sept. 1.

Due to the chronic conflicts and concerns for human safety, the bears were euthanized in consultation with the USFWS.

For $1.8M, a treetop retreat upstate with 24 acres, Scandinavian design, and a 'party barn'

Fri Sep 18 , 2020
Listing images courtesy of Houlihan Lawrence Less than an hour from the George Washington Bridge in the charming town of Cornwall, New York, is this hidden treetop escape. Situated on 24 gated acres, the property consists of a Scandinavian-inspired wood and stone main house, a resort-style pool with a waterfall, […] 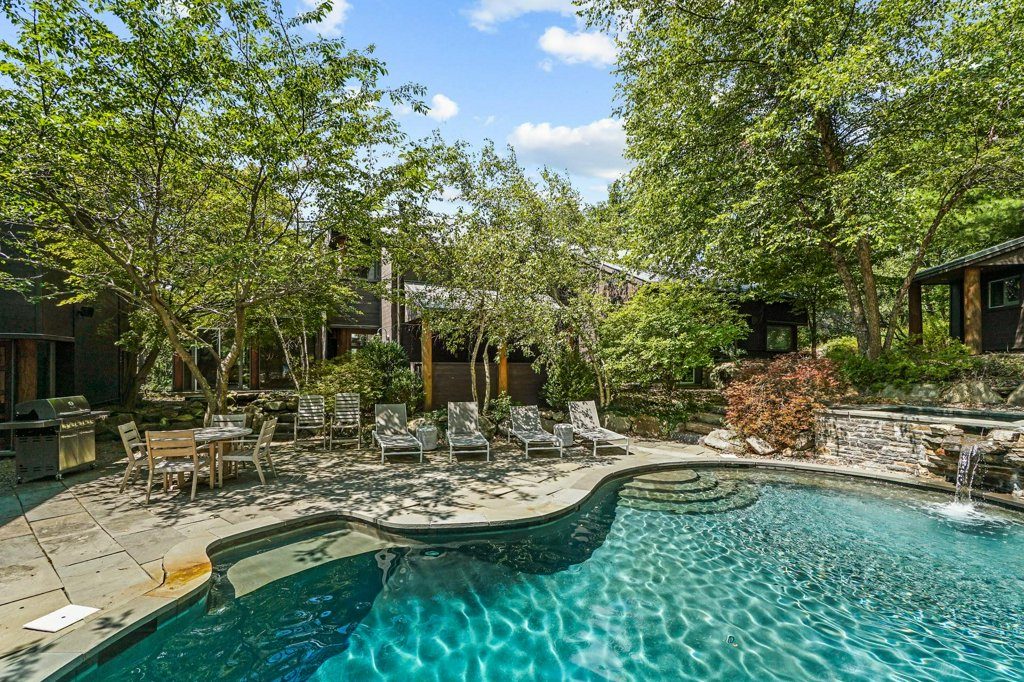