Skip to content
By: Noble HorvathPosted on September 28, 2020
It was only a question of time until Propain’s latest design generation of their PRO10 suspension system was going to find its way into the rest of their lineup. The Spindrift is their big-hit single-crown model, featuring 180mm of rear wheel travel, with 29″, 27.5, or mixed wheel options available. There’s also now a full-carbon frame to go along with the aluminum models.

Wondering where the name Spindrift comes from? It actually wasn’t been dreamed up in a marketing office. When founders Robert Krause and Markus Zander were on a road trip on Vancouver Island a while ago they decided at some point that the next crossroad would decide their next model’s name. Lucky for them, it was Spindrift Road, and not Ragged Ass Road in Yellowknife.

As mentioned, the Spindrift is available with a full-carbon or aluminum frame. The carbon version is constructed with their Blend Carbon process, utilizing different fibers and cloths of carbon for different areas of their frames depending on the requirement of stiffness, impact resistance, flexibility, weight, strength or stress direction.

The aluminum version uses more than one type of aluminum depending on the need, thereby dubbed Blend Alloy. Frame parts like rockers and axles that have to endure high stress use 7075 T6 aluminum. Their tubing features more fatigue resistant 6066 T6 aluminum, whereas forged parts are made out of 6061 T6 aluminum.

All their pivots are protected by Propain Dirt-Shields, a second seal to further protect the Acros bearings from the elements.

The rear disc brake attaches to a 180mm post mount. A chain protector with ribs and integrated softer material on top is in place to minimize the noise from chain slap. The lower down tube is also protected by an extra layer. The rear end features the 12 x 148mm Boost standard. New is the use of SRAM’s standardized UDH derailleur hanger, something that will also be used on other Propain models in the future.

Attached to the bottom bracket are ISCG chainguide mounts, but with Propain’s twist. They slide an ISCG adapter onto a counter-piece of the CF’s aluminum bottom bracket insert or respectively the AL’s bottom bracket tube. If a bash guard is mounted, impact forces are spread over a larger area, protecting the frame. If the mounts do get damaged they can easily be replaced.

Propain has tested their frame beyond the required standardization values, and the Spindrift frame is designated up to category 5 use, so it’s perfectly fine to take it to the bike park. You could even mount a dual crown fork up front, if you felt like it.

The 29″ carbon frame in size L weighs 3,000g without shock, the aluminum model without shock 3,900g. Color options for the CF are Carbon Raw, Moongrey Dark and Lime. The AL comes in Raw, Venomblack and Petrol. Their frame decals and even Badge colors are also customizable.

And yes, there’s room for a water bottle.

The head angle is sitting at 64.5 degrees with the 180mm travel fork, and at 64 degrees with the available 190mm travel option for the RockShox ZEB. The effective seat angle is angled at a progressive 78 degrees. With that combination, the horizontal top tube length is up to 25 mm shorter (except for XL, which is the same due to the longer reach), compared to the older model – something to consider when picking the right size.

The Spindrift’s seat tube length is at the longer end of the spectrum, which means shorter people wanting to use a larger frame might not be able to run longer travel dropper posts. 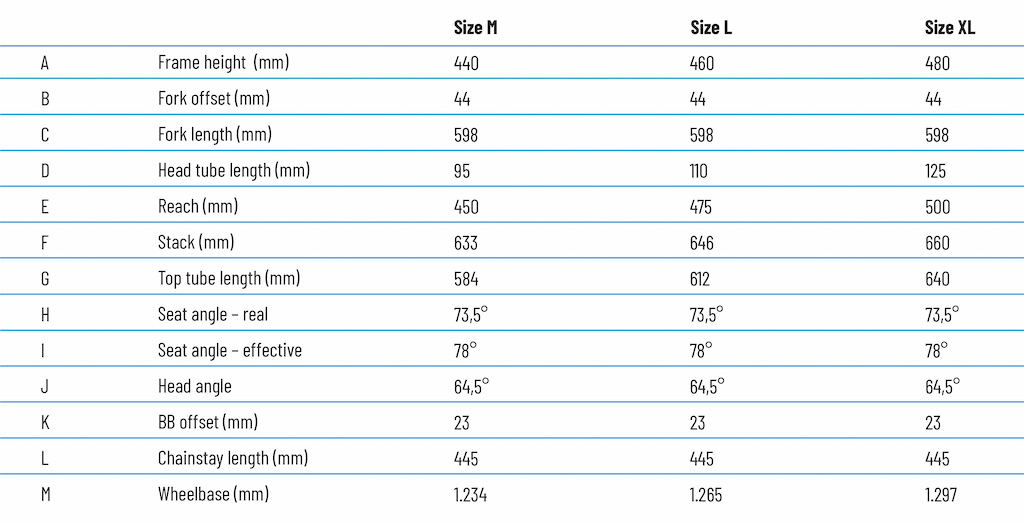 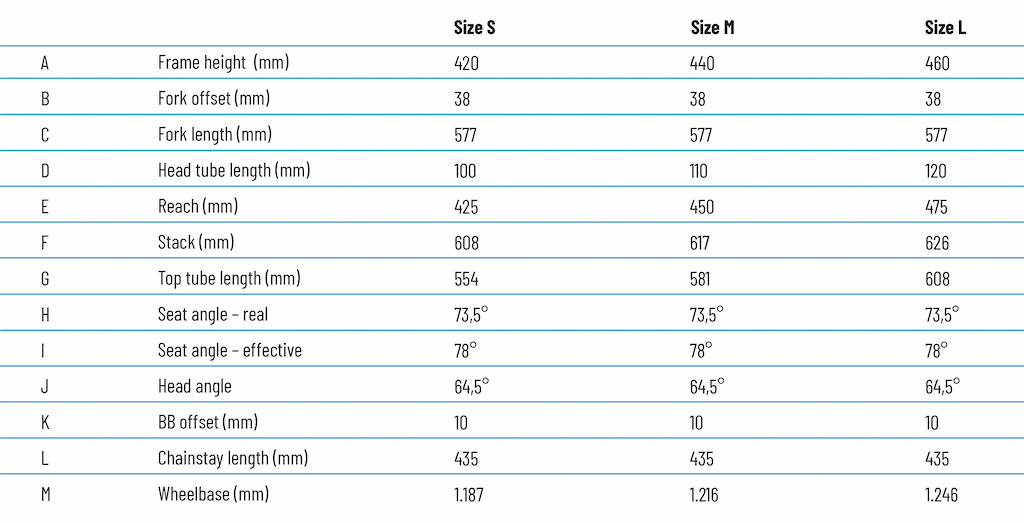 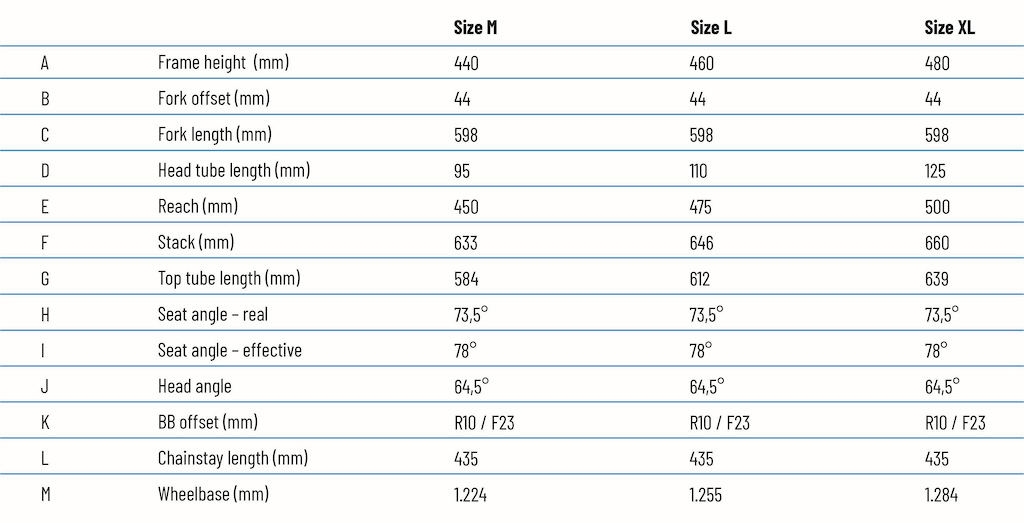 The PRO10 suspension design is based around a virtual pivot system with two counter-rotating links, activating a floating shock from both sides. With the new Spindrift, the linkage assembly has moved from behind the seat tube inside the main triangle for better protection.

The bike’s has a progressive leverage curve a steady drop from beginning to end. That means the Spindrift can be run with either a coil or air shock without fear of bottoming out harshly.

The Spindrift uses a 230 x 65mm stroke shock, delivering an average leverage ratio at 180mm of rear travel of 2.77 : 1 and thereby lowering the ratio from their older model slightly, since that was using a shock with 60mm stroke.

Anti-squat at the recommended 30-35% sag sits at around 120%, having been raised considerably from their previous version, which was located at 60%.

Propain offers many options for their bike specs with their online configurator. Almost all components can be altered, starting with one of the three differently priced starter packages.

As far as the choice of suspension forks goes, you can either pick between RockShox’ ZEB or Fox’s 38 burly single-crown models. For the rear shocks, you can pick from air or coil models from both makers.

The cheapest version of the carbon Spindrift CF starts at €3,199, going all the way up to €7,904 if you deck it out with goodies like Crankbrothers Synthesis Carbon wheels, AXS shifting and Fox Factory suspension.

One of my medium sized test bikes with 29″ wheels, coil shock and a spec list similar to the Performance package had a weight of 15.7kg (34.54lbs.) without pedals. According to Propain, the top spec would bring the bike’s weight down to 15.1kg (33.22lbs.), which sounds about right.

The Spindrift CF can be ordered from their website beginning September 28th 2020, the aluminum bike from November 2020. By November 2020 the Spindrift will also be available in North America, with prices in dollars being announced by then.

I love bikes with lots of travel that you can still pedal up the hill without much hassle to then blast down on whatever trail you find. While that could be said for many enduro bikes these days, bridging the gap to a burly downhill machine is still as enticing to me as it’s ever been. As a matter of fact, I can still remember the days when I lovingly called my 180 mm travel bike with a single crown fork my cross-country ride, almost two decades ago. We’ve come a long way since then.

After having ridden the Tyee’s PRO10 suspension system, my expectations in the Spindrift’s capabilities were high, and I wasn’t disappointed. Propain has found a formula that just works for a wide range of riders, and in case of the Spindrift especially for aggressive pilots, thanks to a nicely progressive suspension curve.

I set up the air shock suspended rear end at the recommended sag of a bit over 30% (ending up at 32%) and never looked back. That provided enough plushness for plowing through roots and rocks, while keeping it from bottoming out at bigger drops or hard landings. At the same time, the suspension still provides enough support for the bike to remain playful enough to pop it off lips or other obstacles on the trail without it feeling like a waterbed on wheels.

Running a coil shock the next day, and running slightly less sag, still worked out fine, although I felt that the extra sag from the day before did cater to the bike’s character well.

In terms of handling, I was first assigned the 27.5″ size medium version, and to be honest, I had a hard time getting used to that setup. Now, that’s not to say that there was anything wrong with it design-wise, but the smaller wheels and agile handling of the bike was far off from what I was used to riding lately. It was a blast to throw from corner to corner and nimble in the air, I didn’t feel comfortable pushing it past a certain speed, missing the stabilizing effect of a bigger front wheel and longer chainstays.

The moment I jumped on the 29er after about a half day’s ride – also a size medium – my frown literally turned upside down immediately. Stable at any speed with lots of cornering traction, I was able to push harder into corners and gained that extra bit of confidence that makes a good day on the bike great.

I was also extremely happy about the slightly longer chainstays, balancing front and rear center better and putting my body more centered over the bike. You’d be surprised how much those 10mm extra in chainstay length can affect the handling – in my opinion, in a positive way. I was blown away myself how much of a difference in handling the two versions provided. I did try the mixed-wheel setup for a really short stint, and while I felt much more at home than on the 27.5″ version with the extra stability the front end provided, I couldn’t shake the feeling that the shorter chainstays wouldn’t make me happy in the long run either.

Wheel size and geometry is a highly immersive topic and with so many choices on the Spindrift it sparked a lot of different discussions. In the end, I’d say the only conclusion that is safe to come to is to ride whatever you feel most comfortable on or that you have the most fun with.

For me, my favorite setup with the Spindrift CF was to run the 29″ frame with longer chainstays for higher balance with a 27.5″ rear wheel, dropping the head angle to about 63.1 degrees with the 190mm travel fork and lowering the bottom bracket to about 340mm (at least that’s what the squiggly measuring tape told me when I grabbed it to check). I was able to readjust the seat angle to its intended measurement by sliding the seat forward on its rails and I was standing in front of what I felt was a near perfect setup for me. Not just in theory, but also out on the trail.

Glued to the ground when cornering, adding a bit more responsiveness overall, being able to push the smaller rear wheel into corners harder with no tire buzzing my rear end in steep sections either was just what I was looking for. Unfortunately, my experiment is not a setup that can be ordered from Propain’s extensive menu, but that doesn’t mean that the Spindrift couldn’t be run like that.

Maybe climbing is not your first concern when considering a 180mm travel bike like the Spindrift, but the little climbing we did showed the bike’s potential. It really feels like a Tyee with more travel and probably a bit more weight due to the components. My test bike with mostly aluminum parts weighed about 16kg including pedals and felt far from sluggish or being a pain to pedal up the hill. The steep seat angle helps enormously, and if you feel like it, you can always activate the pedal platform lever on the shock to reduce bob.

I don’t care if freeride ain’t dead or not. To me, the Spindrift CF represents a very versatile bike, built to excel in the gnar but still light enough with smart geometry to pedal to the top. I’m certain that there are quite a few people out there that are going to enjoy that idea.

For a more detailed review, we already have Propain’s new Spindrift CF in for an upcoming Field Test – stay tuned for more ride impressions, timed laps, and comparisons.