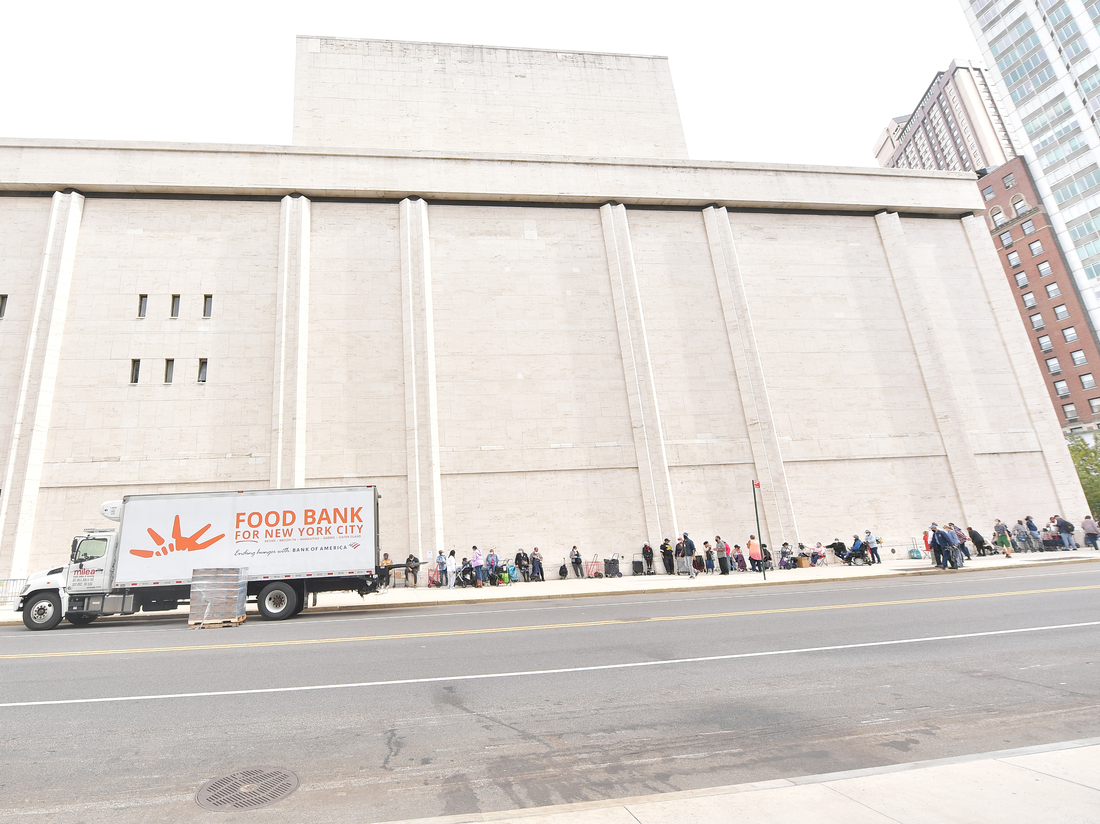 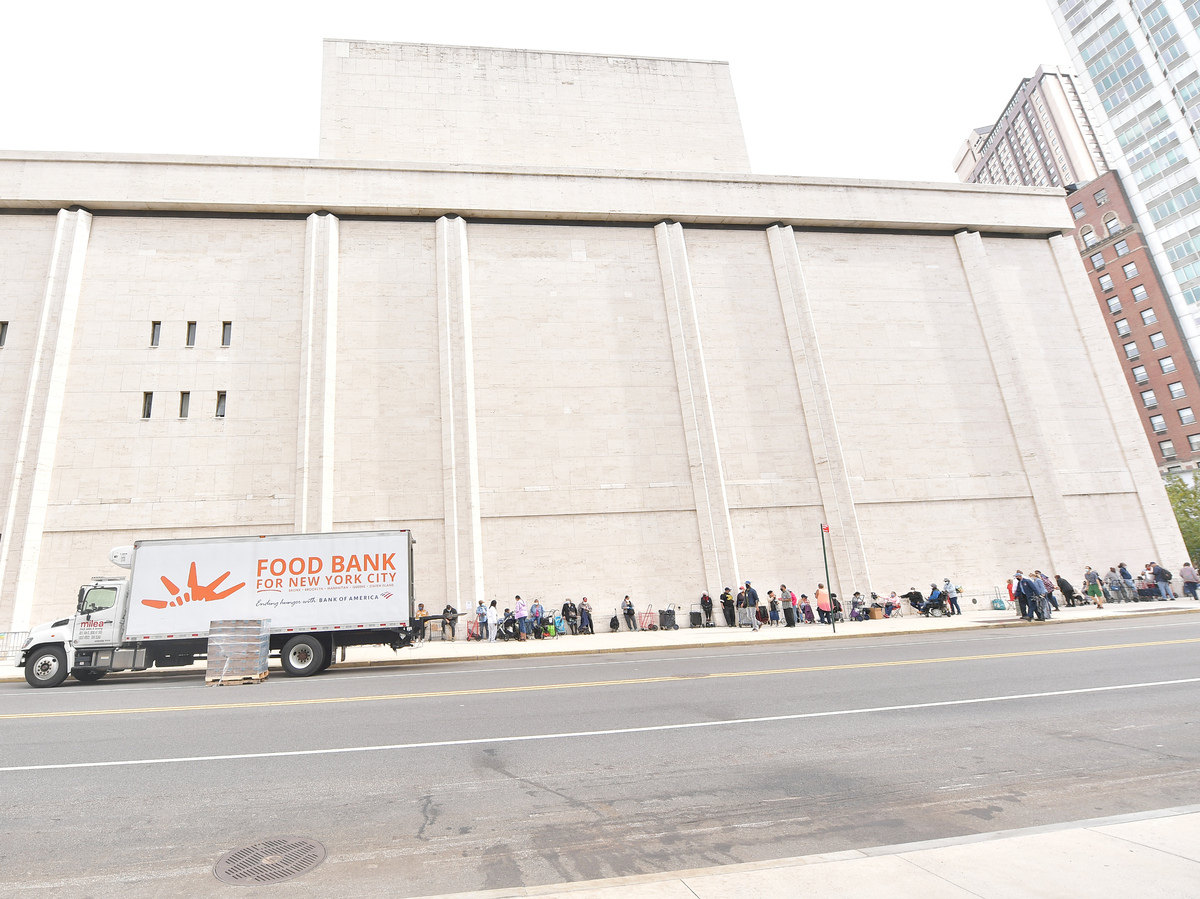 With COVID-19 continuing to spread, and millions of Americans still out of work, one of the nation’s most urgent problems has only grown worse: hunger.

In communities across the country, the lines at food pantries are stretching longer and longer, and there’s no clear end in sight. Before the pandemic, the number of families experiencing food insecurity — defined as a lack of consistent access to enough food for an active, healthy life — had been steadily falling. But now, as economic instability and a health crisis takes over, new estimates point to some of the worst rates of food insecurity in the United States in years.

“COVID has just wreaked havoc on so many things: on public health, on economic stability and obviously on food insecurity,” said Luis Guardia, the president of the Food, Research and Action Center.

It’s a crisis that’s testing families, communities and the social safety net in ways that may have seemed unthinkable before the pandemic began. Here’s a closer look at the landscape:

Nearly 1 in 4 households have experienced food insecurity this year

Even before the pandemic hit, some 13.7 million households, or 10.5% of all U.S. households, experienced food insecurity at some point during 2019, according to data from the U.S. Department of Agriculture. That works out to more than 35 million Americans who were either unable to acquire enough food to meet their needs, or uncertain of where their next meal might come from, last year.

For about a third of these households, access to food was so limited that their eating patterns were disrupted and food intake was reduced. The rest were able to obtain enough food to avoid completely disrupting their eating patterns, but had to cope by eating less varied diets or utilizing food assistance programs.

The coronavirus pandemic has only worsened the problem. According to one estimate by researchers at Northwestern University, food insecurity more than doubled as a result of the economic crisis brought on by the outbreak, hitting as many as 23% of households earlier this year.

School lunch programs were already struggling to meet rising demand before the pandemic. With COVID-19 now keeping children out of school, many don’t have access to school lunches at all.

“The other thing that COVID has done is it’s really affected kids a lot in terms of food insecurity,” Guardia said. “One of the things we’ve noticed across the board is that households with children are more food insecure. And we believe that also has to do with school closures. So a lot of kids get their nutrition from school meals, and that’s been disrupted.” 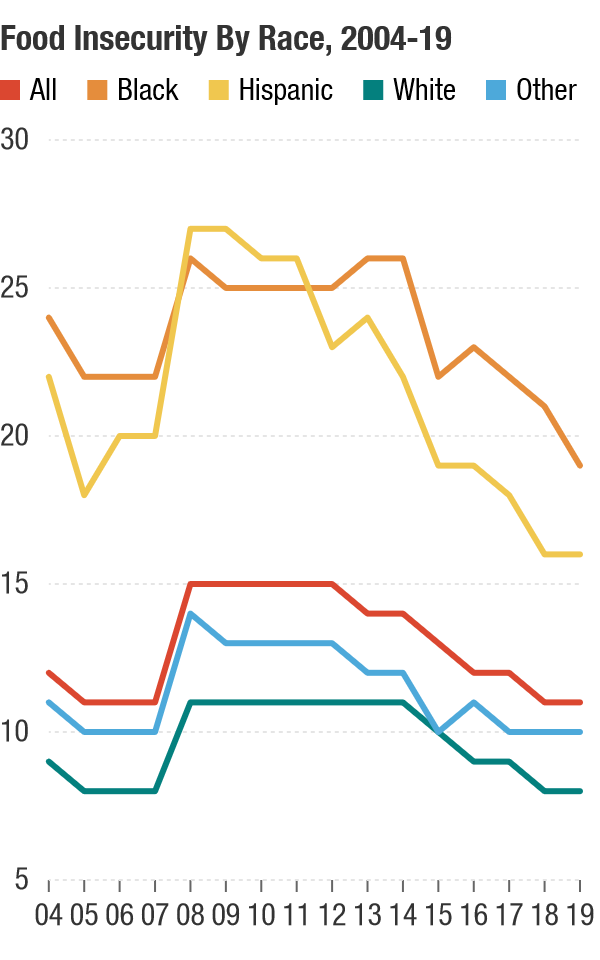 The data shows that food insecurity is more likely to wreak havoc on some communities than others.

Food can also be costlier where they live. A 2010 estimate from the USDA found that groceries sold in food deserts can cost significantly more than groceries sold in suburban markets, meaning people in low-income communities impacted by food insecurity often pay more money for their food. Milk prices, for example, were about 5% more in some spots while prices for cereal were sometimes 25% higher.

The definition of food desert can change depending on where you live. In urban settings, you need to live more than a mile away from a supermarket to be considered inside a food desert. For rural areas, it’s greater than 10 miles. Rural areas are slightly more likely to be food deserts than urban areas and, according to Feeding America, and while they make up just 63% of counties in the country, they make up 87% of counties with the highest rates of food insecurity.

One in nine people in the U.S. used SNAP — the Supplemental Nutrition Assistance Program (also known as food stamps) — in 2019, according to the Center on Budget and Policy Priorities. SNAP benefits vary depending on the need of the participant, but the average SNAP benefit for each member of a household is $129 per month.

SNAP is the largest food assistance program for low-income Americans in the nation, and because of COVID-19, demand for the program has been growing. In March, when the Families First Act passed as part of the government’s emergency response to the pandemic, the maximum benefit for SNAP recipients was temporarily expanded by an estimated 40%. An analysis from the New York Times shows that SNAP grew by 17% from February 2020 to May 2020, three times faster than in any previous three-month period.

Yet even with that expanded food aid, the program hasn’t managed to meet the nation’s food security needs. Expanded benefits have now lapsed for some families, despite many continuing to struggle. Congressional Democrats have sought to increase funding for SNAP and other nutrition assistance benefits, but prospects appear uncertain.

The problem is hardly unique to the U.S. According to the United Nations World Food Program, the global pandemic has the chance to double the number of people experiencing acute food insecurity, from 135 million in 2019 to 265 million in 2020.

“COVID-19 is potentially catastrophic for millions who are already hanging by a thread,” the program’s chief economist, Arif Husain said in a statement published this spring. “It is a hammer blow for millions more who can only eat if they earn a wage. Lockdowns and global economic recession have already decimated their nest eggs. It only takes one more shock — like COVID-19 — to push them over the edge. We must collectively act now to mitigate the impact of this global catastrophe.”