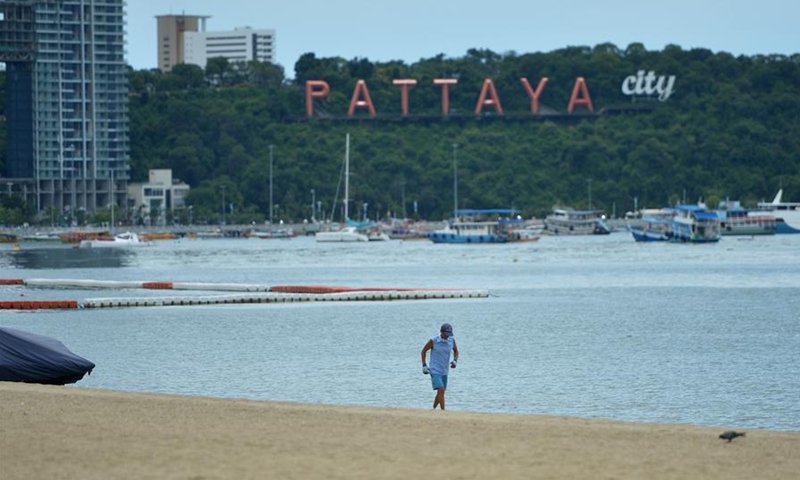 A man runs on the Pattaya beach in Chonburi province, Thailand, Sept. 15, 2020. With the skies shut and borders sealed, the Thai economy had since March been suffering with the lack of cash flows from the tourism industry. (Xinhua/Rachen Sageamsak)

With the golden week of the Chinese National Day approaching, tourism agents and officials abroad have been more active in launching and promoting “online tourism packages” through livestreaming, in an effort to attract Chinese tourists and bring in revenue to provide relief to their economies in the post-pandemic era.

“China has emerged from the shadow of the epidemic, and we expect China’s reviving economy can bring us vitality,” Yu Linlin, president of the Thai Jinlin Trade Association, told the Global Times on Thursday.

Yu noted that there are many travel companies in the association that have actively combined online and offline commerce, selling durian, bird’s nests and rubber products from Thailand to China.

“It does not make a huge profit, but we have finally seen real revenue since the end of March,” Yu said.

Even during the pandemic, many Chinese agents in Thailand became livestreamers on apps such as TikTok and Pinduoduo after the shutdown of their tour guide business, talking about their travel experience and selling local specialties to make a profit.

The pandemic has taken a heavy toll on Thailand’s tourist industry as a whole. According to the Phuket Tourist Association, tourism in Phuket, Thailand’s key tourist destination, suffered a loss of 180 billion baht ($5.72 billion) in the first half of 2020.

To attract Chinese tourists, the governor of the Tourism Authority of Thailand Yuthasak Supasorn appeared on a live show held by the Fliggy app in June to recommend travel products from Bangkok, Phuket, Koh Samui and other favorite destinations of Chinese travelers,  according to a statement Fliggy sent to the Global Times.

According to local media, Thailand’s Tourism and Sports Authority is implementing a plan to restart the country’s tourism industry, and it is focusing on attracting high-spending tourists from China, South Korea and its ASEAN neighbors.

Thailand is not alone in its online efforts to appeal to Chinese tourists. Industry observers said that 2020 is also the first year of “online travel” for the tourism industry.

The Louvre museum in France met Chinese netizens through the online streaming platforms of two Chinese apps, Taobao and Fliggy, on Tuesday. Since February, Fliggy has launched more than 36,000 live travel shows, with more than 520 million views.

As the tourism market gradually recovers, places that have been publicized through live broadcasting will get a head start when cross-border travel opens again, an employee of Fliggy, Alibaba Group’s online travel booking platform, told the Global Times.

GEG Travel, a tourism company for Chinese-speaking tourists based in the Netherlands, has cooperated with Hungary, Poland, the Czech Republic and 10 other Central and Eastern European (CEE) countries to launch a series of live programs.

In 2020, the Chinese-CEE countries’ tourism sectors lost about five to seven years’ growth, Zsuzsanna Vincze, chief advisor in Tourism, Ministry of Foreign Affairs and Trade of Hungary, told the Global Times on Thursday.

“With the coming golden week, let’s show in China how amazing the CEE region is,” Amy Cai, managing director of GEG Travel, told the Global Times.

“The crisis has nurtured  an opportunity that we could all benefit from, I am confident that as soon as the pandemic is over, we will be able to convert the tourists’ interest into actual travels and new business connections, ” Zsuzsanna said.