There are certain things I marvel at every year around here, including how beautiful the spring and fall are and how sultry and steamy August always seems to be. There were a few coolish days during the earlier part of the month, but overall I’d say we missed out on […]

There are certain things I marvel at every year around here, including how beautiful the spring and fall are and how sultry and steamy August always seems to be. There were a few coolish days during the earlier part of the month, but overall I’d say we missed out on the fabled “cool week,” when refreshingly dry conditions provide a needed respite from the steam and funk of stagnant air.

Which is why we have western North Carolina — another marvel — and where we again managed to escape to a couple of weekends ago. It’s a marvel due to the obvious reasons (beauty, relaxing change of pace, astounding variety of vegetation and flora, pure air and water), but also because of “climate change” (significantly cooler temperatures) and its sheer accessibility, which is to say about 240 miles and four hours by car.

Every year I ask myself why we aren’t up there more often and frankly don’t come up with a satisfactory answer. Just sitting on a porch and watching the mountains — and listening — can be an incredibly rejuvenating experience. Can one really be entertained by literally “watching” the mountains? The answer is yes, absolutely. They’re an anchor to all the beauty that was and will be and, like the seas, change constantly with varying light and cloud cover.

But clearly to get the full experience one needs to go out and explore, and the vastness of the surrounding lands offers nearly limitless opportunities to do so. For example, about halfway up Hwy. 176 between Tryon and Saluda there is a beautiful waterfall that’s visible from the road during the wintertime, but totally obscured by kudzu and deciduous trees during the rest of the year. Unlike the nearby and famous Pearson’s Falls, the trail to Melrose Falls is unmarked and not maintained, meaning that there are plenty of people like myself who know of the Falls, can hear and even catch a good glimpse at the right time of year, but have never actually made their way to the Falls on foot.

One of the most scenic parts of the drive up the mountain is a section where the highway twice passes over the Pacolet River via two nearly adjacent rustic and attractive old stone bridges. Just past the first bridge and on the left is a small parking area where the trail to the Falls originates. There’s enough room there for two cars to park. Just beyond that and on the right is a larger parking area that can easily accommodate a half dozen cars or so.

Get a weekly recap of South Carolina opinion and analysis from The Post and Courier in your inbox on Monday evenings.

The hike to the Falls is actually pretty easy overall and about a mile round-trip. Along the way one has to rock-hop over a couple of babbling brooks and traverse through woods that have the feel of a veritable rain forest, and then — the sort of difficult part — going down a steep descent to a rocky outcropping. From atop the outcropping one gets spectacular views of the upper Falls, but to get a good view of the entire waterfall (which is about 80 feet tall), walk around the side to a very sheer ledge, realizing that getting too greedy with the views could turn into a misstep and a cartwheeling 50-foot fall to certain death. Definite live, adrenaline-juicing action; no bars, no net, no nothin. (A different pathway is taken to get to the base of the Falls.)

So be careful! According to one “old-timer” up there, the Melrose cliffs claim about one person per year (unverified). A view of the nearby Big Bradley Falls can also be seen from a spine-tingling ledge; getting to the bottom of the Falls requires rock climbing experience and the use of ropes. What awaits the intrepid hiker is an unobstructed view of a beautiful waterfall with supposedly one of the best swimming holes in Polk County. (FYI—I wouldn’t know personally.)

Later in the afternoon, while again “watching” the mountains, all’s quiet when about 6 o’clock here comes a large cat sauntering across the front lawn (realizing we’re sort out in the wild country) with a big fat brown squirrel in its mouth, the squirrel’s tail hanging down and barely brushing the ground. The cat was all attitude, self-satisfied— just like any cat — and ripped with muscles, so big I thought it may have been a small mountain lion. Then I noted the bob tail, yet was so slack-jawed that I didn’t think about reaching for the phone and a video opportunity before it was too late. Darn it! I’m still kicking myself over that one. It’s rare enough spotting bobcat during daylight hours — much less one with fresh kill in its mouth. A first for me, I can tell you.

Anyway, it’s still plenty wild and always beautiful up in them thar hills.

Thu Sep 17 , 2020
Getty WR Allen Robinson of the Chicago Bears looks on during the second quarter against the Detroit Lions The Eagles don’t need another receiver but let’s throw Allen Robinson’s name on the wish list. Why not? Philadelphia gets linked to every potential free agent or trade victim anyway. Robinson is […] 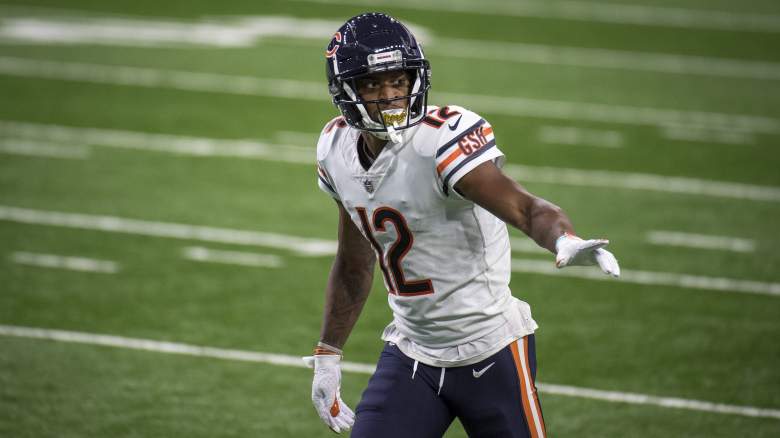