CLOSE William Berry scored twice in a 28-10 victory to open District 1-5A play Thursday Shreveport Times The approach of Byrd football – at least on offense – has been a bit different. The Yellow Jackets’ multiple option attack aims to keep opponents off guard and eventually break their will. […]

The approach of Byrd football – at least on offense – has been a bit different.

The Yellow Jackets’ multiple option attack aims to keep opponents off guard and eventually break their will. On defense, like everyone else, Byrd eyes big plays and toughness.

The Purple and Gold executed it plan in impressive fashion on Thursday night at Lee Hedges Stadium in the District 1-5A opener against Haughton.

The Yellow Jackets ran for more than 350 yards – including 85 yardson 11 straight carries during a back-breaking drive at the end of the first half – and Chris Grieder tied a school record by snagging three interceptions in a 28-10 victory over the Buccaneers.

“That’s the way we like to play,” Byrd head coach Mike Suggs said. “I can see the confidence brewing and these guys are flying around.” 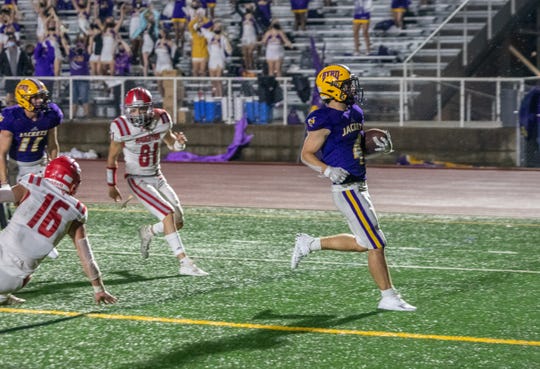 Byrd running back William Berry finishes off the second of two touchdowns in Thursday’s victory against Haughton. (Photo: Jeremy Hernandez/Special to The Times)

William Berry, who tallied two first-half touchdowns, including a 60-yard sprint in the first quarter, says the Jackets (2-0, 1-0 District 1-5A) are ready for a “Revenge Tour.”

“I haven’t felt this in a while – last year was tough,” Berry said. “It feels great when were rolling, rolling. It feels like no one can stop us when we have long drives and everyone is working hard up front. If we keep a helmet on a helmet, no one can stop us.”

Byrd got plenty of offense, but didn’t need much thanks to the work of Grieder and Company. His effort matched a three-pick performance from Nicholas Peoples against Parkway in 2011.

Haughton took a 3-0 lead with a 39-yard field goal from Carter Jensen midway through the first quarter, but Berry helped the Jackets respond immediately with his 60-yard dash up the middle.

The 7-3 lead held until late in the first half, when the momentum changed for good.

The Yellow Jackets authored an 11-play drive that erased all but 6 seconds of the half. The possession was capped by Berry’s 11-yard run to the left pylon.

It was clear, at that moment, the Haughton defense had no answer for Byrd’s punishing ground attack.

“It felt like we had the game, but we had to keep our foot on their throat and keep rolling,” Berry said.

Jason Little also scored on the ground for Byrd.

Haughton’s lone touchdown came on a 23-yard connection between quarterback Colin Rains and receiver Elijah Rochon with 2:38 in the game.