SeaWorld’s newest theme park is almost halfway finished. And we’ve got some fresh looks at the progress of the park, which will become the third major theme park on Abu Dhabi’s Yas Island. 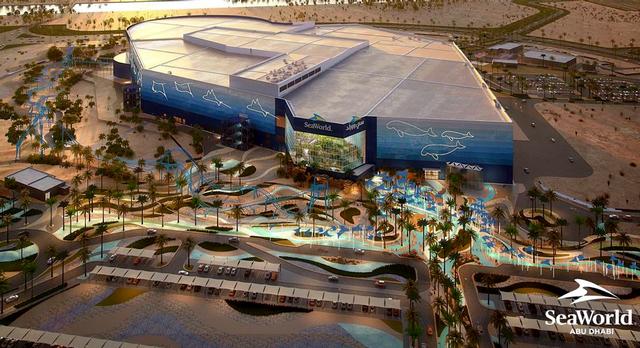 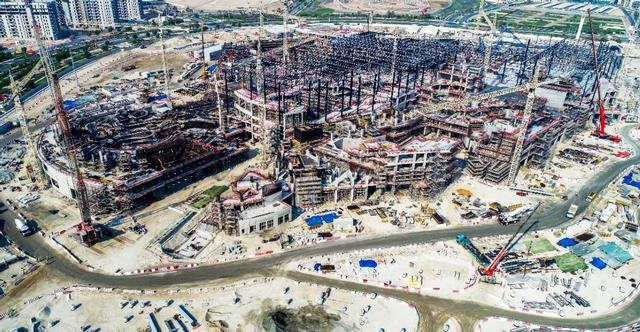 It appears that the construction photo is taken from the perspective of looking at the left side of the building from the concept art, if you want to compare the two. Although the park is mostly indoors, if you look carefully, you can see some roller coaster track on the outside of the building to the left and front of the park.

SeaWorld Abu Dhabi will be built next to Ferrari World, on the opposite side of that park from Warner Bros. World Abu Dhabi. Built on multiple levels with a total area of approximately 183,000 square meters, the new park will have more floor space than either of its siblings. The park will feature one of the world’s largest aquariums and the first dedicated marine life research center in the United Arab Emirates. As announced when the park’s plans were unveiled, this will be the first SeaWorld without Shamu, as it will not feature orcas.

There’s no attraction line-up yet, but the Miral said that the park will feature “six distinct realms,” “countless interactive exhibits,” and “an immersive ride that takes guests on a thrilling and visually stunning journey from Pole to Pole.”

“SeaWorld Abu Dhabi represents the first new SeaWorld park in over 30 years and the first park outside of North America,” SeaWorld’s Interim CEO, Marc Swanson, said. “We’re looking forward to creating unforgettable experiences for our guests, educating them about some of the planet’s most majestic marine animals, and continuing our world class animal care, conservation and advocacy work.”

“This is yet another great new addition to Yas Island’s immersive attractions and experiences,” Miral Chairman Mohamed Khalifa Al Mubarak said. “It will help further position the island as a top global destination, and contribute to the growth of Abu Dhabi’s tourism vision. We are proud to have partnered with SeaWorld Parks & Entertainment on this incredible project, which brings more than 55 years of expertise in marine conservation and world class marine animal care to Yas Island.”

SeaWorld Abu Dhabi is scheduled for completion by the end of 2022.

* * *
We wanted you to read this article before we make our newsletter pitch, unlike so many other websites. If you appreciate that — and our approach to covering theme park news — please sign up for our free, three-times-a-week email newsletter. Thank you.