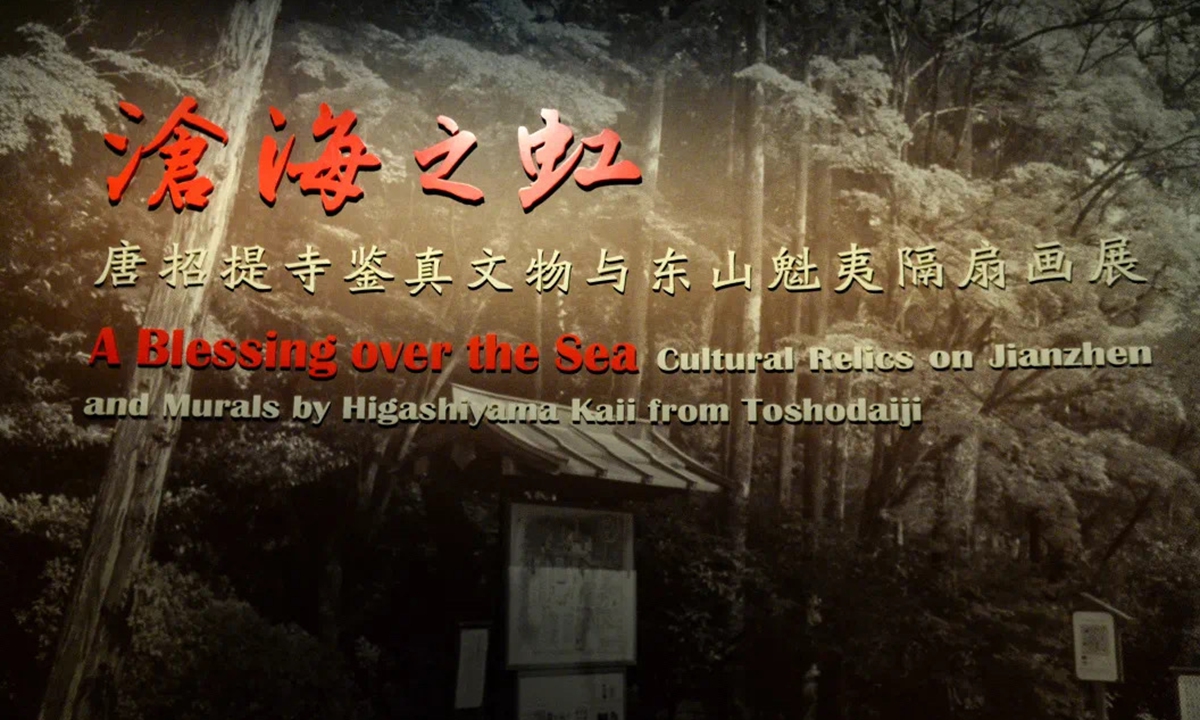 A total of eight valuable cultural relics on loan from Japan set sail for home on Sunday from East China’s Shanghai Municipality.

The items, loaned to the Shanghai Museum for an exhibition, were originally supposed to be returned earlier in 2020, but their return had to be postponed due to the COVID-19 pandemic. According to the Shanghai Museum, they are scheduled to arrive at the Port of Kobe in Japan on Monday morning.

The set of cultural relics are from Toshodaiji temple, a Buddhist temple in Japan. According to an introduction from the Shanghai Museum, a Chinese Buddhist monk called Jianzhen (688-763) from Yangzhou, East China’s Jiangsu Province, took six agonizing voyages eastward to propagate Buddhism in Japan. He finally reached his destination in 753 and founded Toshodaiji, which became the head Buddhist monastery of Japan’s Ritsu Buddhism.

This exhibition, A Blessing over the Sea: Cultural Relics on Jianzhen and Murals by Higashiyama Kaii from Toshodaiji, sold 220,000 tickets, testifying to the long tradition of Sino-Japanese cultural exchanges as well as the 40th anniversary of the signing of the Agreement for Promoting Cultural Exchanges between China and Japan in 2019, according to the introduction of the exhibition.

Among the many cultural relics and contemporary paintings, the Kinki Sharito, a pagoda-shaped gold reliquary containing 3,000 sariras – bead-shaped objects sometimes found among the cremated remains of Buddhist spiritual masters – that Jianzhen carried to Japan, and a painting The Sea Journey to the East of a Great Bonze from the Tang Dynasty painted by Japanese artist Higashiyama Kaii, which depicts Jianzhen’s legendary life and his spiritual heritage, were handpicked for the exhibition.

This exhibition was originally displayed at Shanghai Museum from December 17, 2019 to February 16, but was prolonged to April 5 due to the coronavirus, China’s news site The Paper reported.

On May 23, the painting was shipped to Japan while the Kinki Sharito was stranded at the museum since it has a higher-level cultural ranking and the Agency for Cultural Affairs in Japan has strict regulations on these relics’ transportation.

An employee of the Shanghai Museum told the Global Times on Monday that the Kinki Sharito is a national treasure of Japan, the highest level of the country’s cultural relics.

Yang Zhigang, curator of the Shanghai Museum, said that the relics are usually transported by plane. However, due to the travel restrictions between China and Japan from June to September, the agency made some adjustments and agreed for the first time that the Kinki Sharito could be transported by ship.

Both China and Japan have made great efforts to return this batch of cultural relics. Chu Xin, deputy director of the Shanghai Museum’s exhibition department, explained that according to international practice, the exchange of cultural relics must be handled by personnel from both sides. However, because of the travel restrictions, the process for packing up the relics was supervised by the Japanese side online.

The packing up of the Kinki Sharito was finished after a Japanese expert arrived in Shanghai in late September and completed his 14-day quarantine. He later spent nine hours with the museum’s staff to complete the handover of the cultural relics during China’s National Day holiday. He is currently scheduled to return soon to Japan, where he will complete another 14-day long quarantine.