Shutterstock Arethusa Falls A hiker was killed after falling from a waterfall in New Hampshire on Saturday, marking the state’s third climbing-related death in less than a week. The man was hiking Arethusa Falls in Crawford Notch State Park with two friends, and went ahead of them on the trail […]

A hiker was killed after falling from a waterfall in New Hampshire on Saturday, marking the state’s third climbing-related death in less than a week.

The man was hiking Arethusa Falls in Crawford Notch State Park with two friends, and went ahead of them on the trail to the top of the falls, the New Hampshire Fish and Game Department said in a statement.

When the friends arrived at the top, which is about 70 feet high, they found his body, but had to leave the area in order to obtain cell phone service to call 911, the statement said.

The man’s body was recovered from the two-mile trail just before 11 p.m. His identity has not yet been released.

The fatal accident came just one day after another hiker died following a climbing accident at the Rumney Climbing Rocks, about an hour and a half away.

In that instance, a man fell about 55 feet to the base of a cliff while climbing a route known as the Dead Sea Equestrian, the Fish and Game Department said in a statement.

RELATED VIDEO: 24-Year-Old Hiker Falls to His Death in Hawaii While Trying to Retrieve Hat

The man had told his climbing partner that he was coming down when he “suffered a catastrophic equipment malfunction” and fell, unaided, dozens of feet to the ground, according to the release.

Nearby climbers quickly rendered aid and called 911, but he died of his injuries at the scene, the department said.

The man was reportedly using a makeshift climbing harness made from a leather belt and a kayak strap when it broke, the New Hampshire Union Leader reported.

Both incidents came just days after another fatal fall on Sept. 20, in which a climber plunged to his death at Cannon Cliff in Franconia Notch State Park, the department said in a statement.

Benjamin Kessel, 34, fell 150 feet down the cliff after a large rock dislodged and severed his climbing rope.

His body was not recovered until the next morning due to dark and cold conditions, the statement said.

Rescuers who observed the area said a rock as large as a refrigerator had dislodged as Kessel approached it from below, then slid over and severed his climbing rope, knocking him more than 100 feet down. It then became lodged in some small spruce trees.

Kessel was an engineer and avid rock climber who’d climbed in places like Nepal, China, Thailand, Patagonia and Peru, according to his obituary. He was from Somerville, Massachusetts, and taught and led expeditions with the MIT Outing Club.

Thu Oct 1 , 2020
“It’s certainly a wonderful healthy snack option and is really taking off across the country,” Katona said. Martin’s also makes fresh apple cider and will still be selling it along with a variety of applesauce, jam, jelly, syrup and apple blossom honey. It also plans to dabble in apple-themed health […] 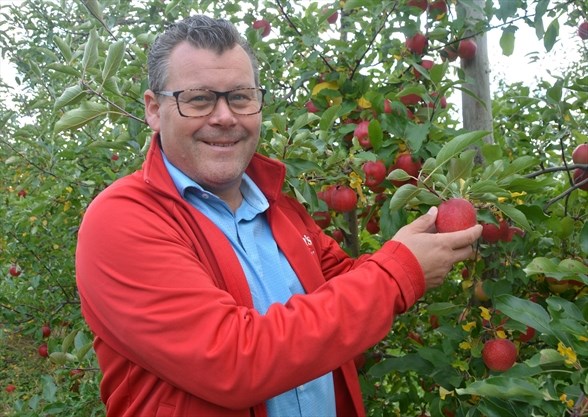