“We expect significant movement in November and December capacity to be adjusted lower in the coming weeks,” Helane Becker, an aviation analyst at Cowen investment bank, wrote in a memo on Tuesday. Carriers like United, JetBlue, Alaska, and Delta are taking “a more aggressive approach by reducing capacity early to […]

“We expect significant movement in November and December capacity to be adjusted lower in the coming weeks,” Helane Becker, an aviation analyst at Cowen investment bank, wrote in a memo on Tuesday. Carriers like United, JetBlue, Alaska, and Delta are taking “a more aggressive approach by reducing capacity early to limit cash burn,” Becker said.

But some airlines, including Southwest, American, and Spirit, are making such adjustments closer to the day of travel, Becker says. Southwest, for instance, has been combining flights and adding layovers to numerous routes during the holiday season.

“We recently adjusted our flight schedule for November and December to reflect the demand we’re seeing for travel, a process we’ve been continually undertaking throughout this year,” a Southwest spokesperson said in an emailed statement. “We’ve worked hard to keep service in all of our cities and to provide flights that are in highest demand. We realize that for some that means a previously nonstop journey now might require a same-plane stop, or a change of planes in a connecting airport.”

The Dallas-based carrier is offering customers affected by the cuts the chance to rebook their itineraries (although it has never charged change fees). The majority of U.S. airlines have also permanently eliminated change fees for domestic flights, which could help passengers resolve any undesirable shifts to flight schedules—although customers who want to alter their plans will usually be responsible for paying any difference for a new fare.

How crowded will airports be?

Most hubs aren’t predicted to have the same hustle and bustle of previous holiday seasons, but if you’ve flown at all during the COVID-19 outbreak, you can probably expect airports to look busier than they have been in past months.

The average number of daily fliers has crept up throughout the pandemic, and will likely crest amid the holidays. Becker predicted in her memo that by the December holidays, the amount of daily U.S. air passengers will top 1 million fliers. (Current numbers are hovering close to that: On October 11, there were 984,000 fliers—the highest daily total yet during the outbreak.)

If patterns from summer travel are any indication, airports will be more crowded over holiday stretches this winter. The three summer holidays—Memorial Day, Fourth of July, and Labor Day—were all high points for air passenger numbers, with each holiday weekend setting a new pandemic record.

“We also believe a major driver of increased travel is boredom and Zoom fatigue,” Becker wrote. In other words, people are starting to brave boarding planes if it means being face to face with their families or friends instead of opening presents remotely or raising glasses of eggnog over video chat.

Another trend that will help thin out crowds at airports? Travelers are planning longer holiday trips, eschewing peak travel days for earlier departures and later returns. Searches for flights between 14 and 20 days are up by 26 percent compared to last year, Kayak’s data shows, while flight searches for trips of six days or less are similarly down nine percent.

“We believe Americans will travel this holiday season,” Steve Hafner, CEO of Kayak, said in a statement. “It will just look different.”

We’re reporting on how COVID-19 impacts travel on a daily basis. Find all of our coronavirus coverage and travel resources here.

Wed Oct 14 , 2020
Activists and defense lawyers viewed the case as a trial about how former empires should atone for past crimes. PARIS, France — A Congolese activist was fined 2,000 euros ($2,320) Wednesday for trying to take a 19th-century African funeral pole from a Paris museum in a protest against colonial-era injustice […] 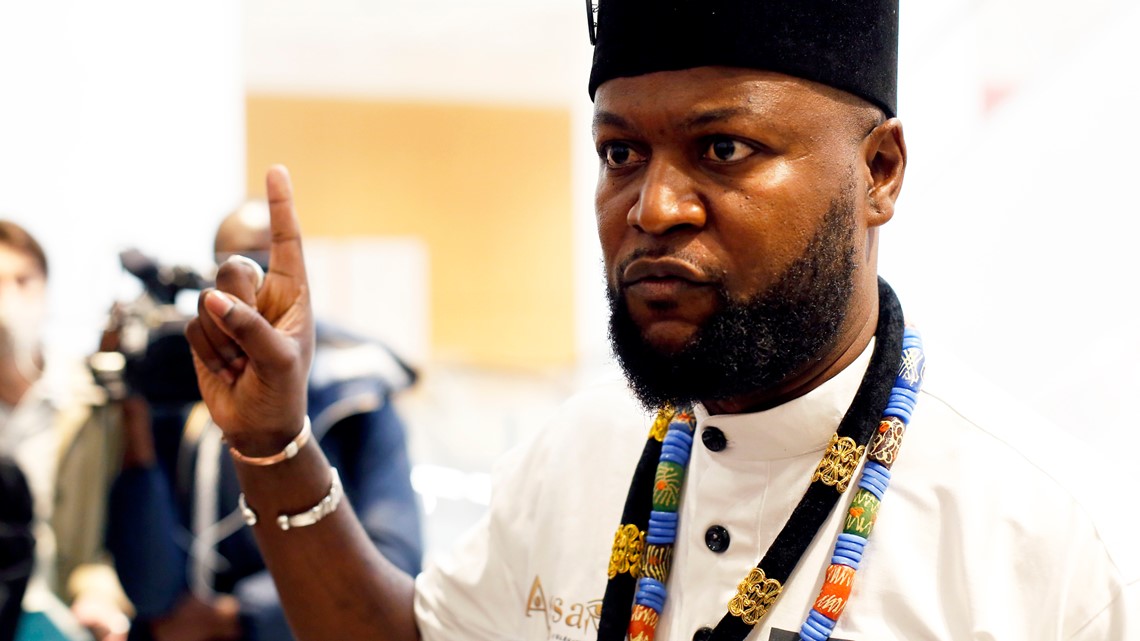