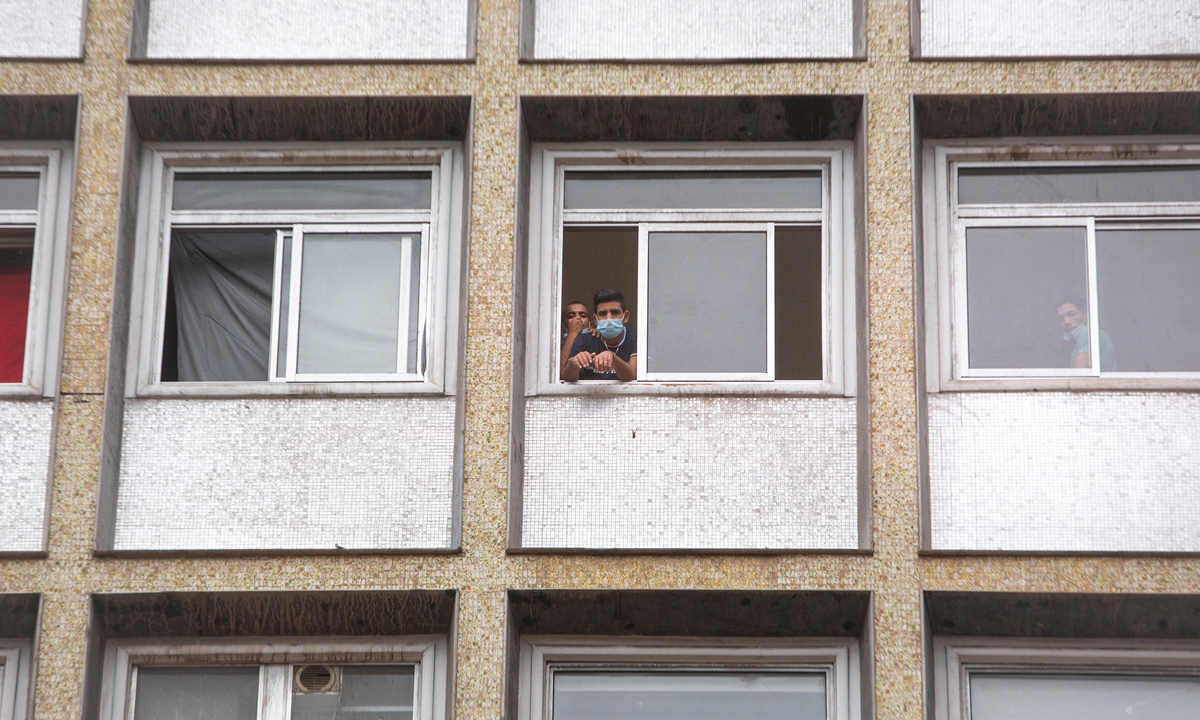 Migrants who are in quarantine amid the novel coronavirus pandemic look out of the window of a hotel in Gran Canaria in the Spanish Canary Islands on September 14, 2020. Photos: AFP

When he stepped onto the rickety boat which would take him from Africa to the Canary Islands, 16-year-old Madassa Mohammed didn’t know about the coronavirus epidemic which was sweeping across Europe.

But even if he had, it wouldn’t have stopped him or any of the thousands of other African migrants who have been arriving in droves on the Spanish archipelago.

From a farming family in Mauritania, Mohammed said he came looking for work after his father died, leaving them penniless.

“I’m the oldest and the one who needs to earn the money. My siblings are too young,” he explained at a safe house for unaccompanied minors in Telde on Gran Canaria.

“I was forced to cross the sea to look for work; it’s risky but it’s all about money.”

He arrived in March as the virus was spreading like wildfire across Europe at a time when West Africa had barely registered any infections.

“On the day we left, they hadn’t yet discovered any cases,” said this lanky teen wearing the red shirt of one of the Canaries soccer teams.

“Just staying at home is worse than coming here and dealing with the pandemic… in the end, they choose the lesser of two evils,” said Noemi Santana, the Canary Islands official in charge of social rights.

Since January, more than 5,100 migrants have made the perilous crossing from the African coast, an increase of 500 percent from the same period in 2019, raising fears of a recurrence of the crisis of 2006-07 when tens of thousands of migrants flooded onto the islands.

Although a crackdown largely stemmed the flow, it began ticking up again about a year ago. In the first half of September, there were almost 1,200 arrivals – a figure not seen since 2008.

By sea, the shortest route to the islands is more than 100 kilometers from the Moroccan coast, but many come from as far away as Mauritania, Senegal or Gambia which lie well over 1,000 kilometers to the south.

With absorption centers overflowing, the regional government – which is responsible for unaccompanied minors – has set up nine emergency shelters to house the youngsters.

And the adults, who are the responsibility of the central government, have been housed in hotels emptied by the pandemic or in tents at Arguineguin port where they are brought to safety by Salvamento Maritimo, Spain’s coastguard.

Although the virus has not deterred migrants bent on reaching Europe, it has certainly complicated the situation when they arrived.

All arrivals must undergo a PCR test for the virus and anyone infectious must be isolated, while everyone else must spend 14 days in quarantine.

“We cannot mix people from different boats. One could arrive with positive people on board and another without and if we put them all together, we’ll have a problem.”

So far, nearly 500 migrants have stayed at the camp for several days while undergoing testing.

Salvamento Maritimo’s orange vessel has been bringing in a constant stream of migrants rescued off Gran Canaria, with residents counting three or four boats a day.

Next to the camp lies a heap of colorful makeshift vessels, some containing blankets or items of clothing left behind by those who were on board.

When they land, the migrants are given masks by Red Cross staff in full protective gear and then taken to different tents to have their temperature taken and a PCR test.

Due to quarantine rules, no one is allowed inside the tent camp nor the hotels. Standing outside a holiday complex of bungalows at Maspalomas beach, an AFP correspondent could see migrants waving from the windows.

But at the shelters for minors, the youngsters can go out for a walk, although like everyone else in Spain, they must wear a face mask.

In Telde, 20 kilometers south of Las Palmas, a group of them gather in a park, laughing and joking as they dance to the beat of an African tune.

For Dipa Niagate, a 17-year-old Malian who arrived in December, Spain’s three-month lockdown imposed in March, “was very difficult.”

Aside from their Spanish classes, the youngsters had little to do other than play video games, “play together or watch television,” he said.

For those who landed during the lockdown, it was months before they got their first glimpse of the island, says Juan Enrique Quintana, who runs the site for an NGO.

“They would tell me: ‘I’m not even sure how long I’ve been here and I still haven’t seen Spain,'” he told AFP.