Japan Airlines will stop addressing passengers as “ladies and gentlemen” in favor of gender-neutral phrases, in an effort to be more inclusive. Starting Thursday, announcements on flights and in airports will use new forms of address, including “Attention all passengers” and “Good morning, everyone.” Announcements in Japanese will remain unchanged, […]

Japan Airlines will stop addressing passengers as “ladies and gentlemen” in favor of gender-neutral phrases, in an effort to be more inclusive.

Starting Thursday, announcements on flights and in airports will use new forms of address, including “Attention all passengers” and “Good morning, everyone.”

Announcements in Japanese will remain unchanged, according to The New York Times, as they do not use gender-specific language.

“We aspire to be a company where we can create a positive atmosphere and treat everyone, including our customers, with respect,” airline spokesman Mark Morimoto told the Thomson Reuters Foundation. “We have committed to not discriminate based on gender, age, nationality, race, ethnicity, religion, disability, sexual orientation, gender identity or other personal attributes.”

Other airlines have changed their announcements to recognize nonbinary and gender-nonconforming travelers, including Air Canada and the low-cost European carrier EasyJet.

“As the community continues to evolve and expand beyond binaries to ensure everyone feels welcome, steps like the one Japan Airlines is taking are the right ones,” Jonathan Lovitz, senior vice president of the National LGBT Chamber of Commerce, told NBC News.

Lovitz said the travel industry is often on the leading edge of inclusion — for customers, employees and even suppliers.

“Making their welcome messages, pronoun choices and the like more inclusive is not just a best practice we can expect to see across the industry, it’s an essential element to their ongoing work ensuring everyone is welcomed on board their flights at every level of operation,” Lovitz said.

Being inclusive and authentically engaging, he added, is key for any brand, including an airline, to earn LGBTQ consumers’ economic and social loyalty.

Last year, Japan Airlines hosted a charter flight to bring LGBTQ travelers from Tokyo to the annual Pink Dot Pride celebration in Okinawa. The airline began offering family benefits to LGBTQ employees in 2017. Today about a third of Japanese companies have similar measures in place.

While homosexuality is still a taboo topic, support for LGBTQ rights in Japan is inching forward: According to the Pew Research Center, just over half of Japanese people said they accepted homosexuality in 2002. Today it’s closer to 70 percent. And among those 18 to 29, the figure is 92 percent.

Same-sex marriage is not legally recognized in Japan, but in 2015, Tokyo’s Shibuya district started issuing same-sex partnership certificates. Since then, some two dozen wards, towns and cities across the country have followed suit.

These “proof-of-partnership” documents can help with hospital visitations and other rights, but they are not legally binding.

A Pride House is slated to open in Shinjuku on Oct. 11, National Coming Out Day, ahead of the 2021 Summer Olympics in Tokyo.

Organizers are billing it as “Japan’s first permanent LGBTQ center.”

Wed Sep 30 , 2020
Barcelona is a melting pot of heritage and cutting edge technology, as much as a melting pot of Catalans and every nationality in the world. We begin at Sephora in El Triangle Shopping Mall, a shopping hub in the cultural centre of the city of Barcelona. Customers are enticed and […] 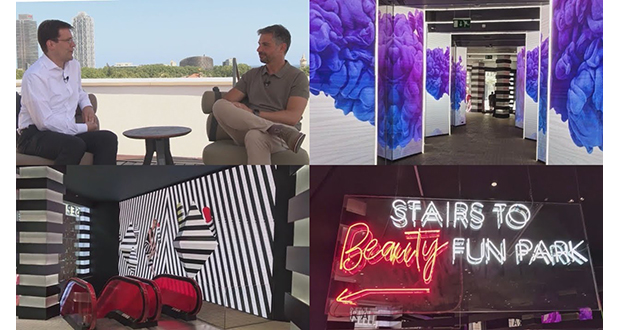