Skip to content
By: Noble HorvathPosted on October 13, 2020
CLOSE

Supreme Court nominee Amy Coney Barrett spoke about the responsibility of the courts in an opening statement at her confirmation hearing.

WASHINGTON – Democratic presidential nominee Joe Biden said he’s “not a fan” of expanding the size of the Supreme Court, giving his clearest position on the matter since the death of Justice Ruth Bader Ginsburg last month.

Biden made the remarks during an interview Monday with WKRC-TV in Cincinnati as the Senate conducts hearings this week with President Donald Trump’s Supreme Court nominee Amy Coney Barrett.

“I’m not a fan of court packing but I don’t want to get off on that whole issue,” Biden said. “I want to keep focused. The president would love nothing better than to fight about whether or not I would, in fact, pack the court or not pack the court.”

The potential expansion of the Supreme Court has become a flashpoint on the campaign trail. Some progressives suggested adding seats to the court if Democrats win the White House and take control of the Senate in November in response to Trump’s nomination of Barrett, a conservative, to fill the seat of Ginsburg, a liberal icon. 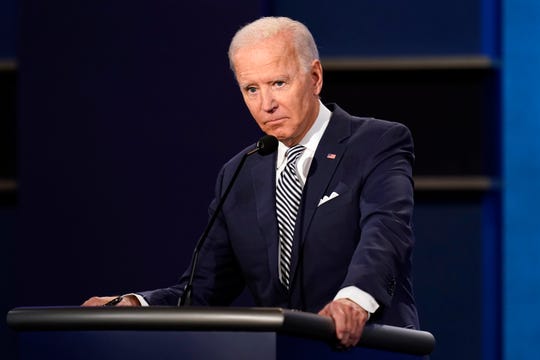 Trump has hammered Biden over his evasion of questions on the topic. In a heated moment of crosstalk during the first presidential debate in Cleveland, Trump pressed Biden to answer whether he supports packing the courts. Biden redirected by saying it was not the main issue at hand.

“The issue is, the American people should speak,” Biden said.

Echoing that theme, Biden Monday said “court packing is going on now.” Biden and other Democrats have sharply criticized Trump for seeking to get a nominee for the Supreme Court confirmed this close to an election.

“The focus is why is he doing what he’s doing now? Why now with less than 24 days to go in the election?” Biden said. “And the hearing’s going to take place and there’s going to only be about 10 days or whatever it is before the vote takes place. That’s the court packing the public should be focused on.”

Biden had said he opposed expanding the size of the Supreme Court during the primary campaign but had evaded the question as the Democratic presidential nominee, saying last Friday voters “don’t deserve” to know his position on court expansion before the election.

“Just days after saying that voters ‘don’t deserve’ to know whether he would pack the court or not, Joe Biden continues to dodge the question and show his arrogance and disdain for the American people,” Murtaugh said.  “Would he support a partisan overthrow of one-third of the federal government or not?“

Sen. Dick Durbin, D-Ill., the second-ranking Senate Democrat, told reporters, “There’s no active conversation or deliberation about any changes in court composition except this one nomination.”

Durbin said Biden was “entitled to speak his mind on the issues. Most of the time I’m going to agree with him; sometimes I won’t.”

Sen. Chris Coons, D-Del., a closer adviser to Biden, said he interpreted Biden’s remarks to mean the former vice president is “not a fan” of the president’s efforts to quickly appoint conservatives judges to fill federal court vacancies including at the Supreme Court.

“Historically, he’s been someone who did not think expanding the number of Supreme Court justices was a wise idea,” Coons said.

But the senator pointed to “recent circumstances.” Coons said Trump and Sen. Majority Leader Mitch McConnell over the last four year have “jammed hundreds of conservative, young and in a dozen cases, demonstrably unqualified judges, on to the courts.”