Updated at 6:30 p.m. with indications the Biden ad blitz will be smaller than it looked a few days ago.

WASHINGTON — Former vice president Joe Biden hasn’t set foot in Texas since the primary, but on Friday, his campaign announced that he’s sending wife Jill Biden on Tuesday — the latest move to ratchet up investment in a state that national Democrats avoided for decades.

Tuesday is the start of early voting.

The Biden campaign recently reserved $6.3 million for an advertising blitz through the final four weeks, marking an end to decades of neglect of Texas by the party’s presidential nominees. But Friday night, the ad tracking service Medium Buying said the campaign had canceled ads outside El Paso and San Antonio in the coming week, except for ads Sunday during the Cowboys-Giants game.

The Trump side has no ad time reserved in Texas. Polls have shown a dead heat for most of the last few months, though a Texas Tribune/University of Texas poll released Friday shows the president ahead 50-45.

Viewers in Dallas-Fort Worth especially will have trouble avoiding Biden’s pitch, which also targets voters in the Houston, San Antonio and Austin markets.

“It’s a hell of a lot more than anybody else ever spent, that’s for sure,” Texas Democratic Party chairman Gilberto Hinojosa said earlier this week. “This is a very good sign.”

Biden’s ad buy and reversal suggests something of a head-fake, though unlike the cash-strapped Trump campaign, he has ample cash. The president spent lavishly on his reelection effort and has been unable to replenish his coffers for over week during his bout with COVID-19.

Staying up on TV next week in El Paso and San Antonio, but canceling spending in other markets

Much of the outreach is targeted at Latino and Black voters, including ads on ESPN Deportes during Dallas Cowboys games.

One ad Biden is airing in El Paso and San Antonio features a Latino veteran, Paul Cruz, denouncing Trump’s denigration of casualties of war and POWs and contrasting that with the late Beau Biden’s service in the Army, and his father’s respect for the military.

Texas Democrats saw the blitz as only a start; the state party is also spending several million for ads aimed at Black and Latino voters as part of a coordinated assault.

Democrats haven’t won a statewide contest in Texas since 1994, and Jimmy Carter was the last presidential nominee to carry the state, in 1976.

Trump’s 9 point win four years ago was among the worst GOP showings since then. And in 2018, Sen. Ted Cruz’s close call against former El Paso congressman Beto O’Rourke showed that Texas has turned into a battleground. O’Rourke came within 2.6 points and has lately been prodding Biden to put Texas on his schedule in the final weeks.

Brandon Rottinghaus, a University of Houston political scientist, said it will take a lot more than $6 million and a visit from a would-be first lady to flip the state.

Even this modest investment affirms years of effort aimed at trying to make the state competitive.

“For Texas Democrats, the biggest obstacle has been to show that Texas is an investable political property,” Rottinghaus said. “It is not clearly a full-on investment … but it definitely shows that that the Biden campaign cares about Texas enough to send somebody of importance to rally the troops.”

Trump’s 5-point lead in Friday’s Texas Tribune/UT poll jibes with other polls in the past month, though it was conducted over a long and eventful nine-day period from Sept. 25 to Oct. 4 that included the first presidential debate and the nomination of a Supreme Court justice.

Biden held the president to a tie throughout the summer. One survey from late June and early July, from The Dallas Morning News and the University of Texas at Tyler, showed Biden ahead by 5 points, but by early last month, the same pollsters found Trump leading by 2.

Until Monday, Biden had only deployed O’Rourke and other Texas allies in the state.

His visit ended a decades-long streak of Texas being ignored by the national ticket, though Emhoff lacks the star power of his wife or Biden himself.

The Trump campaign has kept up a steady volley of digital ads in Texas — a cost-effective way to target voters: $5.9 million since March statewide. The Lincoln Project, a group of anti-Trump Republicans, plans a $1 million offensive in Texas, doubling its investment to date.

These are relatively modest sums in a state with nearly two dozen media markets. By comparison, the 2018 Cruz-O’Rourke contest drew $125 million, a record for any Senate race. 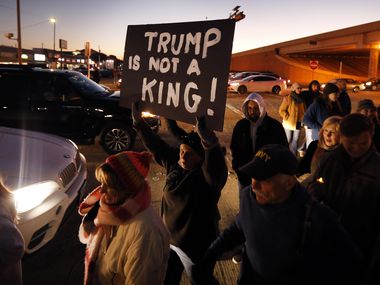 Texas remains critical for Republicans. Without its 38 electoral votes, they have no hope of winning the White House, whereas Democrats can build on their strongholds in California and New York any number of ways.

“They’re dumping a lot of money in here to run ads, but … if you were serious about making Texas into play, you’d be here,” he said.