For the fourth year running, the Scott Dixon-Josef Newgarden title bout lives on, though with five races to go, not nearly as tightly as the Team Penske driver would wish. Sunday’s race-winner at Gateway exits the weekend with three poles on the year, to Dixon’s none, and holds a hefty lead on laps led in 2020 (400, the overall series lead, to Dixon’s 340 in second-place) – yet he finds himself falling behind.

Unloading at the Indianapolis Motor Speedway, Newgarden found himself in a manageable 49-point hole. But after the two drivers split the weekend doubleheader at Gateway, that deficit has ballooned to 96. 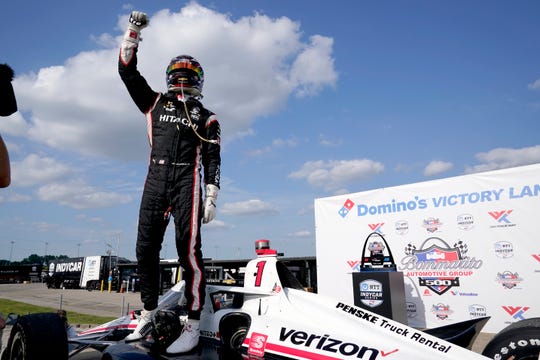 “It’s getting hard now. Yesterday was just tough, just tough. We keep taking one step forward and two steps back, and if we can flip that to two steps forward and one back, it would be okay,” Newgarden said post-race Sunday. “We’d be coming out with a net-win, but we just keep washing with less.

“We can’t quite claw our way forward, and we can’t have situations like yesterday where a yellow flag just bites us. We cannot afford that with the points we’re down. If that keeps happening to us, then unfortunately we’re never going to claw our way back with where we’re at right now. But if things stop happening, I believe we can fight.”

More from the Gateway doubleheader:

Sunday’s win was the second consecutive doubleheader weekend Newgarden found himself on the wrong side of a yellow flag – this Saturday’s more inexplicable than Race 1 at Iowa, caused by his teammate Will Power’s left front tire falling off less than 10 laps after a pit stop. The caution last month split the field, rewarding those that hadn’t yet dipped in and forcing those that had to make a near-impossible climb up from the back of the field.

The same thing happened to Newgarden with less than 100 laps to go Saturday. IndyCar’s race control called a caution on Lap 108 with weather in the area. Officially, it came due to “light moisture” on-track, but multiple drivers, including Newgarden, said post-race they never experienced any. The call came in the middle of pit sequence, eight laps after the Team Penske driver had pitted. He finished 12th, losing 33 precious points to Dixon in the process.

And his list doesn’t stop there – a similar mid-race yellow in the GMR Grand Prix that allowed Dixon to run away from the field, and a mechanical error for the No. 1 car during a stop from the lead at Road America only bolster Newgarden’s claim, feeling like the 2020 championship should have been his to lose.

Maybe it was, but Lady Luck has all-but snatched it from his grasp – despite a feeling that he has an even more competitive car to steer than his 2019 title run.

“It’s hard to complain about bad luck, because at the end of the day, it is what it is, and you’re going to have things go against you, and some will go your way, too,” he said. “A lot of times, you can’t control it.

“But those that have gone against us always seem to go Scott’s way. He seems to be the benefactor of our misfortune more often than not. I don’t want to harp on it because that’s racing, and we’ve had some years where everything’s gone our way and Scott’s been on the other end of that. It kinda ebbs and flows, and you can’t complain too much. It’s not like we’re doing a bad job, but our car’s been bitten one too many times with bad luck. We’ve been hoping it’ll stop at some point, but unfortunately it hasn’t completely stopped yet.”

A frustratingly long stop on pole at Road America in Race 1: Dixon win.

“We’ve got to stop giving these guys lay ups though. I feel like that’s what’s happening,” Newgarden said after finishing fifth in Race 1 at Iowa.

The biggest difference, outside the win discrepancy, is where the drivers have finished during the other’s victories: two fifth-place finishes for Dixon and an average of 9.75 for Newgarden, including two outside the top-10.

And in the races when Dixon hasn’t won, and Newgarden’s been close but not on top, he’s too often been on the wrong side of contention, finishing fifth in Race 1 at Iowa and the Indy 500 – both races representing Dixon’s two runner-up finishes.

That doubly hurt last weekend in the 500, where Newgarden was quick to remind media members in Sunday’s call that he was right in the hunt until the final stop, when Sato eventually drove away from him. Both pitted on Lap 168, with the Team Penske driver beating his competitor out of the pits and into Turn 3 before he was eventually overtaken.

And he did all that starting 13th while Sato and Dixon were on the front row in the only double-points race of the year. 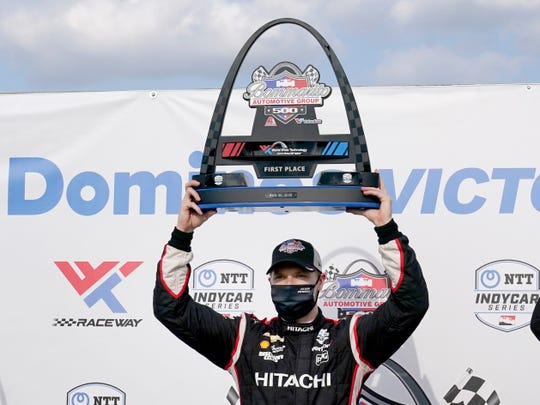 “I felt like we were in the 500 with a shot to win at the end,” Newgarden said. “It just didn’t work out this year. I’ve said it many times – Indy is a tough place, and a lot of guys have gone their whole careers and that place has never shined on them, and that’s okay. That’s just how it is sometimes.”

Now, he and the rest of the IndyCar paddock expect to head next to Mid-Ohio for a doubleheader in two weekends. Penske Entertainment Corp. president and CEO Mark Miles said ahead of the 500 that was the weekend the series was targeting, and Sunday, IndyCar president Jay Frye said things were looking “90%” to work out. Of course, Dixon has won there six times in his last 13 appearances, including 2019.

And the series would then head to the IMS road course for two more races, where Dixon won earlier this year after finishing runner-up three consecutive years.

IndyStar covers the sports you love

Long story short: Newgarden faces an uphill battle for a title defense, and the two-time champion knows it, but he’s far from giving up.

“We’ve not had a very smooth year,” he said. “We probably could have had four or five wins at this point, but we’re not there. Just a little bit behind and trying to chase and play catch-up and do the best we can and claw on back. That’s all we can do.

“But we can’t ever take two steps forward – it’s always one step forward and two back. If we can reverse that trend, we can fight for a championship.”