Skip to content
By: Noble HorvathPosted on September 28, 2020
Ruffo Black Customs is a Buenos Aires-based workshop owned by a father and son duo. Up until 2007, they dealt solely with four-wheeled entities, specializing in just about anything from repairs and restorations, to regular service and vehicle customization. However, they ended up shifting focus towards the spectacular realm of modified two-wheelers, and we can’t exactly blame them.

Over the years, the firm embarked on countless one-off moto quests that led to some genuinely fascinating end results. And let me tell you, it doesn’t look like they have any intention to slow things down! To give you a clear idea as to what these fellows are capable of achieving, we’ll be diving in for a closer examination of one such venture. Needless to say, this spectacular exploit does a pretty sweet job at being a testament to their abilities.

The project in question began with a standard KZ650 model from Kawasaki’s range – a timeless classic that deserves a healthy overhaul. During the late ‘70s, this bad boy was an absolute showstopper and a force to be reckoned with, to say the least. 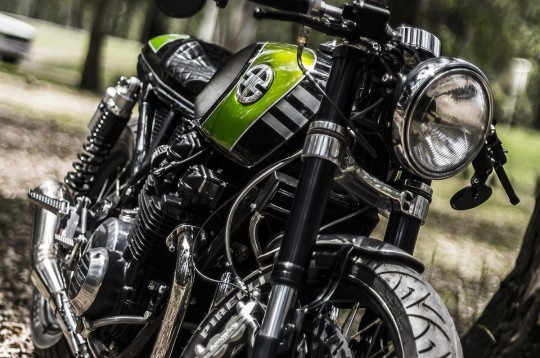 It was put in motion by a feral four-stroke DOHC inline-four monstrosity, with two valves per cylinder head and a generous displacement of 652cc. This air-cooled leviathan prides itself with a compression ratio of 9.5:1 and four Mikuni carburetors.

At approximately 8,500 revs, KZ650’s vicious powerplant will deliver up to 64 hp, joined by 42 pound-feet (57 Nm) of ruthless twisting force at 7,000 rpm. A five-speed constant mesh transmission channels this force to the rear multi-spoked alloy wheel by means of a chain final drive.

The powertrain is nested inside a tubular steel cradle frame, which rests on a set of telescopic forks at the front. On the opposite end, suspension duties are taken care of by fully-adjustable twin shock absorbers and a double-sided swingarm. Stopping power is handled by a 245 mm (9.65 inches) brake rotor up front and a drum setup at the rear. Finally, the entire structure crawls on a 19-inch front wheel, coupled with an 18-inch unit on the other end.

Now, in terms of Ruffo’s unique superstar, the build was completed over the course of eighteen painstaking months. The process kicked off with an extensive engine rebuild, which consisted of installing a modern electronic ignition and coils, as well as a fresh oil cooler. 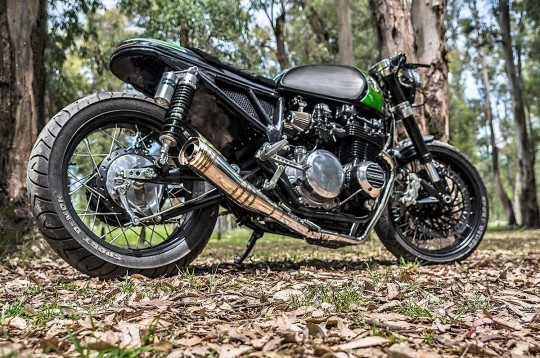 Next, they fabricated a one-off triple clamp that hosts a pair of Marzocchi forks from a Ducati. RBC disposed of KZ650’s original subframe to make room for a custom module manufactured in-house. Besides an aluminum front fender and a unique fuel tank, you will also find a new leather saddle and one neat tail section that manages to look the part.

Additionally, the workshop treated the front brakes to top-grade Brembo calipers, while the rear suspension received dual RFY shocks. We notice a selection of laser cut components, such as a headlight housing and some delicious side covers. Last but not least, the finishing touches consisted of LED turn signals and Raask foot controls.

All things considered, we’ll have to admit that Ruffo Black Customs’ reborn Kawasaki KZ650 is, quite simply, breathtaking in the truest sense of the word!

What are your thoughts on this masterpiece?