By Richard Chang | 24 hours ago

Malcolm Warner, executive director of Laguna Art Museum since January 2012, announced his retirement this week. He will continue to lead the museum through December, following the eighth annual Art & Nature festival and the opening of the exhibition, “Wayne Thiebaud: Clowns,” scheduled to open Dec. 6.

During Warner’s tenure, the museum — Orange County’s oldest — has doubled its endowment, doubled its annual budget — from approximately $1.5 million to $3 million — expanded its staff, especially in the areas of education and development, and elevated its status and visibility.

“Malcolm has been so critical in advancing the mission of the museum,” said Joe Hanauer, chair of the museum’s board of trustees, in a statement. “Long thought of as solely a place for early California landscape painters, today the museum is highly acclaimed as a center to enjoy important works of California art and artists from the early California period to contemporary. Similarly, all art forms can be seen in the museum’s exhibitions.”

During his eight years, Warner hired several people on staff, including a curator and assistant curator of education, a director of advancement, a corporate and foundations relations manager and a director of communications. He hasn’t hired a curator of contemporary art since the departure of Grace Kook-Anderson in 2015.

Warner has curated a number of exhibitions himself, including “Artemio Sepúlveda,” “Dan McCleary: Prints from Oaxaca” and “California Printmakers, 1950-2000.”

“Exhibitions have always been my favorite part of museum work, and I’m proud of the range and quality of the ones we’ve presented during my time in Laguna,” he said in an interview. “Our ‘California Mexicana’ exhibition, which we did under the auspices of the Getty’s Pacific Standard Time initiative, was as rich, enjoyable and informative a thematic exhibition as you’d see anywhere. Then there were all the shows of single artists — from Anna Hills to Tony DeLap and Wayne Thiebaud.”

Warner said he’s proud of the renovation of the lower-level galleries, “which were pretty dismal before and now look fresh and inviting.” He did note that the exterior of the museum, which sits on the high-profile corner of North Coast Highway and Cliff Drive, needs a facelift, and he hopes that happens soon. 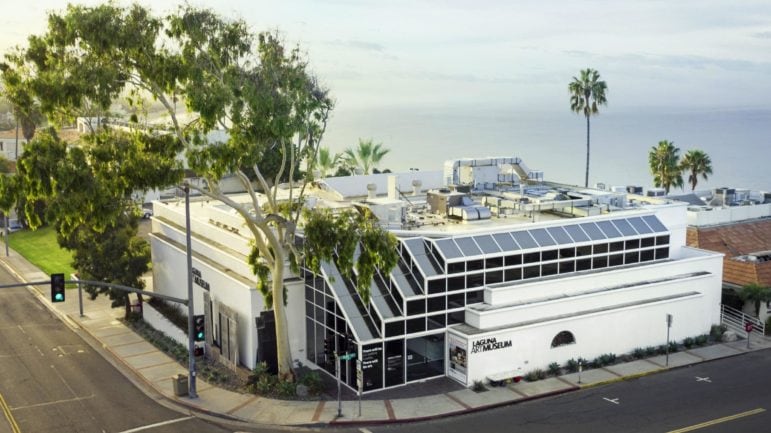 An aerial shot of Laguna Art Museum, which sits on the high-profile corner of North Coast Highway and Cliff Drive in Laguna Beach. Retiring Director Malcolm Warner says he hopes the exterior gets a facelift soon.

Warner added that he helped the museum expand its representation of different periods and styles in California art, which is a key part of LAM’s mission.

Perhaps Warner’s most significant contribution to the museum and to Laguna Beach is the annual Art & Nature festival, which he started in 2013. Since its beginnings, the program has centered on a large-scale, commissioned artwork and public programs on the theme of art’s engagement with the natural world. Artists who have been commissioned for Art & Nature include Lita Albuquerque, Laddie John Dill, Phillip K. Smith III and Elizabeth Turk. The Art & Nature keynote lecture has featured well-known speakers such as California historian Kevin Starr and Leonardo da Vinci expert Martin Kemp.

Before joining Laguna Art Museum, Warner was deputy director at the Kimbell Art Museum in Fort Worth, Texas. He also served as senior curator of paintings and sculpture at the Yale Center for British Art in New Haven, Connecticut; and curator of European art at the San Diego Museum of Art. He received his Ph.D. from the Courtauld Institute of Art, University of London, and his doctoral dissertation was on the British Pre-Raphaelite painter John Everett Millais.

He said he aims to continue working on a catalogue raisonné of Millais’ work in retirement.

“A catalogue raisonné is a massive task, especially when the given artist was as prolific as Millais was,” Warner said. “It’s an exhaustive, detailed documentation of every work the artist produced. I’m probably 80% to completion. What keeps me going is the significance of the artist. Millais was a major figure in British art of the Victorian period, a leading member of the Pre-Raphaelite group, incredibly famous in his time and best known today for his painting of Shakespeare’s Ophelia floating in the brook.”

A Changing of the Guard

And Peter C. Keller, president and CEO of the Bowers Museum, said he anticipates retiring within the next 10 years. Granted, that’s a long time in the museum world, but Keller is 72, so it could be sooner. He’s been at the helm of the Bowers for almost 30 years.

Laguna board chair Hanauer said the museum has launched an international search for its next executive director. He added that Warner will continue to provide counsel to the museum and serve occasionally as a guest curator.

Warner said the board of trustees should consider a hire that represents California’s diverse population.

“It would hardly be possible not to consider diversity in the present climate, and quite rightly,” he said. “It all depends on what good candidates emerge, of course, but I would hope a Latino background — or a particular interest in Latino art — would be desirable. Certainly they needn’t go out of their way to hire another expatriate Englishman!”

Warner believes he is leaving the museum in good hands, with a first-rate staff and a board that’s “engaged and supportive.”

“Our philanthropic support is as sound as ever, despite the pandemic,” he said. “If the museum can do as well as it has through the present crisis, that bodes very well indeed for its future.”

In the coming years, he hopes to finish the catalogue raisonné of Millais, do some traveling with his wife Sara and “spend time in my home country of England.”

And what will he miss most about Laguna Art Museum?

“I’ll truly miss the camaraderie we have among the museum staff — and also the fact that they have to laugh at my jokes because I’m the boss. It’s not the same at home.”

Richard Chang is senior editor for Arts & Culture at Voice of OC. He can be reached at [email protected].