Skip to content
By: Noble HorvathPosted on September 26, 2020
CLOSE

The Navy Blue Angels and the Air Force Thunderbirds fly over the Delaware River between Camden, NJ and Philadelphia, PA on Tuesday, April 28, 2020.

The Legislature passed a $32.7 million state budget bill Thursday that restores state aid for the Battleship New Jersey museum as one of the tax and other budget changes lawmakers made for the remaining nine months of fiscal 2021.

After votes by both the state Senate and Assembly, the budget bill headed Thursday to New Jersey Gov. Phil Murphy, who on Wednesday called it a “negotiated” budget with the Legislature and indicated his approval.

Late Tuesday afternoon, the budget committees of both the state Senate and Assembly each reinstated $1 million in direct state aid. Murphy had eliminated that annual aid for the Camden ship and museum in both of his budget proposals this year, a move that led to a museum decision to close this month at the same time Murphy advocated nearly $15 million for a North Jersey science museum in his budget proposal.

“I am confident the funding the Legislature included for the battleship will be approved by the governor,” said Battleship Museum and Memorial board chairman Marshall Spevak, who has called a virtual meeting of the museum board for next week to discuss the museum reopening much sooner than the planned reopening April 1, 2021.

The ship was forced to close Sept. 7 without the promise of renewed state aid, and with other income declining in the midst of continuing state coronavirus restrictions like social distancing and limitations on the size of gatherings. 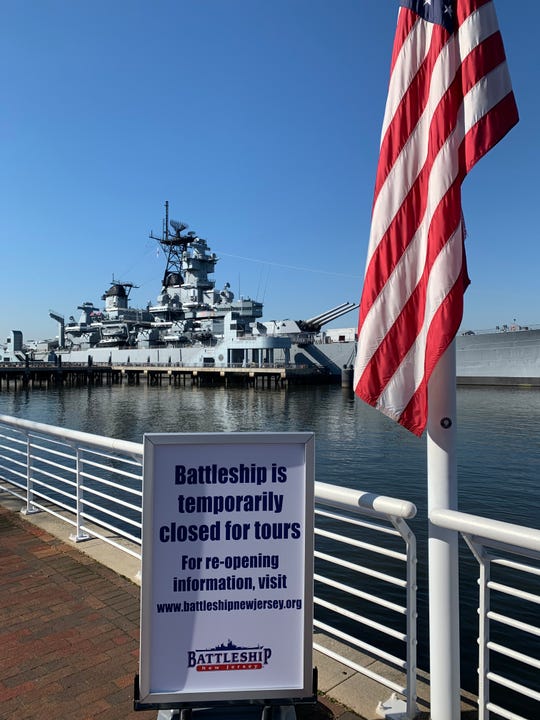 The retired battleship New Jersey, BB-62, sits closed to the public as a floating museum on the Delaware River in Camden because of uncertain state aid and a drop in other revenue due to continuing coronavirus prevention restrictions statewide. A revised state budget proposal with reinstated state aid is pending approval by the Legislature and Gov. Phil Murphy. (Photo: Battleship New Jersey Museum and Memorial)

“We are incredibly grateful to the Legislature for including the Battleship New Jersey, with a special thanks to Sen. (Nilsa) Cruz-Perez and Assemblyman (Bill) Moen for leading the charge on our behalf. We believe the ship deserves state funding and we have communicated that to the governor’s office,” Spevak added.

“The Battleship New Jersey is one of our state’s most historic and beloved attractions, especially for South Jersey. It is a proud way of honoring the service and sacrifice of the men and women of our armed services and of showcasing one of the most formidable battleships of the U.S. Navy,” state Senate President Steve Sweeney, D-Gloucester, said in a statement.

“This funding will allow us to continue to tell its story and to educate visitors about our nation’s military history.”

Legislators from the Fifth Legislative District that represents Camden — Cruz-Perez and Moen — spearheaded the effort to restore museum money.

The two said they were delighted the committees accepted their reinstatement recommendations and hope Gov. Murphy will approve the budget by the Sept. 30 deadline.

“The Battleship has provided many jobs and preserving this beloved ship’s future as a main attraction in the City of Camden was vital. I look forward to the Battleship reopening its doors, its employees returning to work, and the memories that will continue to be made by those taking in its history,” Cruz-Perez said.

Moen said he was dismayed the money was never included in the governor’s proposed spending.

”I feel a lot better today with the hope that after Thursday he (Murphy) will sign this budget bill,” Moen said this week.

In addition to the line item appropriation, the battleship also received a discretionary $1 million grant last year from the state Department of Environmental Protection as a historical site, along with two other sites in the state. However, the museum may not receive that amount this year as Murphy reduced the DEP budget for that program from $2 million to $1.2 million.

Carol Comegno loves telling stories about South Jersey history and our military veterans. Her book, “The Battleship USS New Jersey: From Birth to Berth” is the definitive history of the battleship. If you have a story to share, call her at 856-486-2473 or email [email protected]