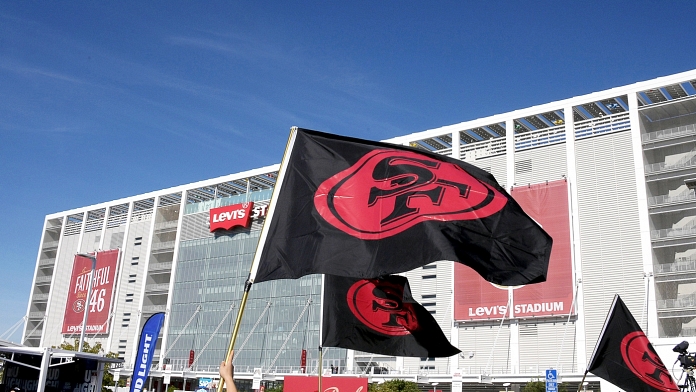 The San Francisco 49ers announced a multi-year partnership extension with Visa, which supports a move to conduct all stadium payments through card or mobile app as soon as this year.

SANTA CLARA, Calif. – In keeping with the organization’s history as a leader in leveraging technological innovation to enhance the fan experience, the San Francisco 49ers today announced that Levi’s Stadium will be among the first wave of NFL venues to complete the transition to a cashless payment model whenever fans are able to return to the venue. The 49ers, while also announcing a multi-year partnership extension with its long-time official payments partner Visa, are making the move to only accept card or mobile payments for concessions, merchandise, and other purchases to improve the fan experience through increased speed of service, safety, and security.

Last year, the 49ers announced they would become the first team in global professional sports to include a dedicated menu of food and (non-alcoholic) drink options in the price of tickets for all season ticket members. Coupled with introducing what the team refers to as its Member Inclusive Menu this year, the shift to digital payments will enable Levi’s Stadium to minimize touchpoints for fans while reducing interactions with stadium concessions staff members in an effort to help all parties stay safe and healthy. While these changes have become essential in the Covid-19 environment, the benefits will serve customers long after the pandemic has ended.

“While the move to fully cashless transactions in venue has advanced more quickly due to the ongoing health emergency, this is a direction we have been heading for several years and we know it’s one that will further improve the fan experience at Levi’s Stadium,” said Al Guido, 49ers President. “Six years of operational data here at Levi’s Stadium tells us that mobile payments are increasing while cash transactions decrease annually. And through our friends at Visa, we know contactless payments reduce transaction times, concessions lines, and some costs.”

In preparation for Super Bowl 50 at Levi’s Stadium in 2016, the 49ers and Visa completed an overhaul to upgrade the venue’s concessions infrastructure to make it the first fully contactless-enabled stadium in the NFL. With close to 600 contactless terminals around the stadium, fans can quickly pay without missing any on-field action.

For fans without any payment options other than cash, the 49ers are installing four on-site cash-to-card kiosks that will enable fans to exchange cash for a Visa-branded prepaid card, up to $500 with no transaction fee. Users will be able to swipe the prepaid card for payments inside and outside of the venue and check their balance anywhere, anytime at RCbalance.com. The cards are not reloadable. The kiosks feature English and Spanish language prompts and will be located at various locations inside the stadium security perimeter; locations to be announced at a later date.

“The 49ers offering a fully digital payments experience for each and every fan is a game-changer. Whether buying at concessions in between plays or ordering from their seats, all fans will now be able to quickly and safely tap to pay, ultimately minimizing touchpoints at checkout,” said Mary Ann Reilly, senior vice president of North America Marketing, Visa. “Visa is happy to extend our partnership with the 49ers and provide the ultimate game experience whenever fans return.”

The partnership extension with Visa maintains the Visa Box Office at Levi’s Stadium but adds entitlement of the 49ers Team Store presented by Visa to the brand’s presence at the home venue of the 49ers.

Upon opening in 2014, Levi’s Stadium was the first NFL stadium to provide mobile ordering of food, beverage, and merchandise from every seat in the stadium for delivery or express pick-up, made possible by its ground-breaking app developed by VenueNext. Regular enhancements to the stadium network and fan experience have enabled the venue to continue innovating over the last three years. The 49ers became one of the first teams to move to a mobile-only ticketing model in 2018 and the next year were among the first to institute a monthly membership plan that allowed season ticket members to spread out their payments equally over the full year.

This shouldn’t come as much of a surprise, but Levi’s Stadium will not host fans for Sunday’s game between the San Francisco 49ers and the Philadelphia Eagles, according to ESPN.

The stadium didn’t host fans for the team’s season opener against the Arizona Cardinals on September 13 due to continued concerns surrounding the coronavirus pandemic. That didn’t rule out fans attending future games, though.

The 49ers will continue to have a dialogue with state and Santa Clara County officials, and in accordance with public health guidelines, to determine when fans can return to Levi’s

The past two games haven’t exactly been what the San Francisco 49ers envision when it comes to their running game.

The 49ers got used to piling up big numbers running the football in 2019 when they finished second in the NFL at 144.1 yards per game. Those numbers have been down a bit the past two weeks, as the team ran for 93 yards on 35 carries in a 36-9 Week 3 win over the New York Giants followed by a 20 carry/116-yard performance in a 25-20 Week 4 loss to the Philadelphia Eagles. Knee injuries to running backs Raheem Mostert and Tevin Coleman have something to do with that, but the 49ers still expect much more on the ground than what they’ve gotten the past two weeks.

“We just have to be better,” tight end George Kittle said after the loss to the Eagles. “If

In a year already filled with heartbreak, the last thing San Francisco 49ers fans wanted to see was star tight end George Kittle hobbling off the field with an injury. Unfortunately, late in the second quarter of Week 1, that nightmare scenario became a reality.

The injury Kittle sustained was diagnosed as a knee sprain, which forced Kittle to miss the next two games, and as a result, the offense was noticeably stagnant at times. Despite scoring over 30 points in each contest he was out, the absence of the offense’s best player loomed large. All signs point to Kittle returning to the field for the 49ers’ Week 4 matchup with the Philadelphia Eagles, and I’ll tell you why him being on the field is more important than you think.

Last year, the 49ers’ success was