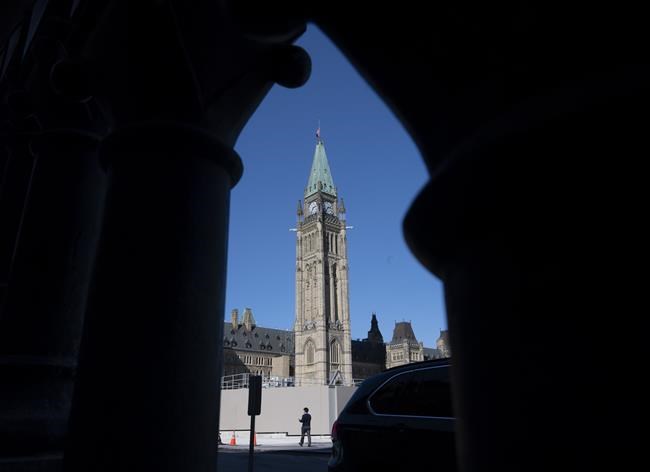 Conservative Leader Erin O’Toole and Bloc Quebecois Leader Yves-Francois Blanchet are expected to return to the House of Commons after isolating due to COVID-19 as Parliament resumes Monday for its first full week. THE CANADIAN PRESS/Adrian Wyld

OTTAWA – The Liberal government is asking Parliament to fast-track its latest COVID-19 economic recovery package, prompting a torrent of opposition outrage that government forced this issue by proroguing Parliament this summer.

The minority Liberal government secured NDP support for the legislation last week by hiking the amount of those benefits by $100 to $500 per week — ensuring no one will get less than they were receiving under the Canada Emergency Response Benefit, which came to an end on the weekend.

They also agreed to an NDP demand to expand the eligibility criteria for the new sick leave benefit beyond simply those workers who contract COVID-19.

Under the newly rewritten legislation, which is now known as Bill C-4, workers who have underlying conditions or are undergoing treatments or have contracted other illnesses that make them more susceptible to COVID-19 are also eligible. So are those who isolate themselves on the advice of their employer, medical practitioner or public health authority for COVID-19-related reasons.

NDP Leader Jagmeet Singh said that means workers who catch the flu or a common cold will now be entitled to collect the sick leave benefit.

“If someone gets sick they need … to quickly be able to take time off so they don’t risk infecting their colleagues,” he said Monday.

“What we’re proposing is something that is going to make the response better, make sure more workers are able to stay home if they’re sick.”

In addition to the sick leave benefit, the bill also creates a new Canada Recovery Benefit for self-employed and gig workers who won’t qualify for the more robust EI regime, as well as a caregiver benefit for workers who have to stay home to care for a dependant for reasons having to do with COVID-19.

Because CERB expired over the weekend, the new bill will need to pass quickly in order for Canadians to begin applying for the new benefits. Applications for the recovery benefit are to open Oct. 11 and, for the other two benefits, on Oct. 4.

Rodriguez said Canadians are watching to see if political parties will work together to pass the aid package quickly.

“Canadians need our help now and this is exactly what the motion is attempting to accomplish,” he said Monday as he introduced a motion to fast-track the bill. “Quick action.”

The motion proposes to limit debate on the bill to just 4.5 hours — bypassing the normal lengthy legislative process, including committee hearings — and allow it to be put to a quick vote, likely on Tuesday.

“What we have today is a government who wants 4.5 hours of debate for $50 billion in taxpayer dollars,” said Deltell.

The Liberals prorogued Parliament in August, which prevented any debate or committee work until it resumed last week. Prime Minister Justin Trudeau said the government needed to prorogue in order to bring in a throne speech and get Parliament’s approval for the COVID-19 recovery plan.

But he also did it amid multiple investigations by House of Commons committees about the Liberals’ decision to award a contract to WE Charity to administer a massive student grant program, when many Liberals, including Trudeau, had clear ties to the organization.

Deltell wants to amend the motion to add a committee hearing where the ministers of finance, employment and children all take questions from MPs for 95 minutes each.

NDP House leader Peter Julian said his party will back the motion but only begrudgingly because people need the help. He said the Liberals’ actions mean millions of Canadians are suffering and anxious about getting support.

“Why did they take millions of Canadians right to the precipice before acting?” Julian asked.

The debate came as the House resumed Monday morning for the first full week of operations for the pandemic Parliament, and as COVID-19 cases continue to surge in the country’s two biggest provinces.

Debate on the government’s throne speech will also continue this week, with speeches expected by both Bloc Québécois Leader Yves-Francois Blanchet and Conservative Leader Erin O’Toole, both of whom have been quarantined after testing positive for COVID-19.

His response to the speech from the throne will be his first statement in the Commons since becoming party leader just over a month ago.

O’Toole’s remarks in the Commons will draw on his experiences waiting to be tested for — and ultimately diagnosed with — COVID-19. But he’ll also use the opportunity to set a tone for how he’ll seek to lead the official Opposition in the coming months and win the country in the eventual next election.

“We’re going to oppose, and we’re going to challenge and hold the government to account,” O’Toole said in an interview last week with The Canadian Press. “But we’re also going to offer some contrasting vision.”

The eventual vote on the throne speech will be test of confidence in Trudeau’s minority government, which it will survive with the support of the NDP.

O’Toole’s Tories came out fast against the throne speech last week, arguing it didn’t go far enough to offer support to Canadians impacted by the pandemic. The Bloc Québécois said absent a federal government plan to transfer billions more for health care to the provinces, they aren’t sure they can support it either.

This report by The Canadian Press was first published Sept. 28, 2020.

Note to readers: This is a corrected story. A previous version referred to the proposed COVID-19 aid legislation as Bill C-2. The bill, which has been rewritten, is now known as C-4.