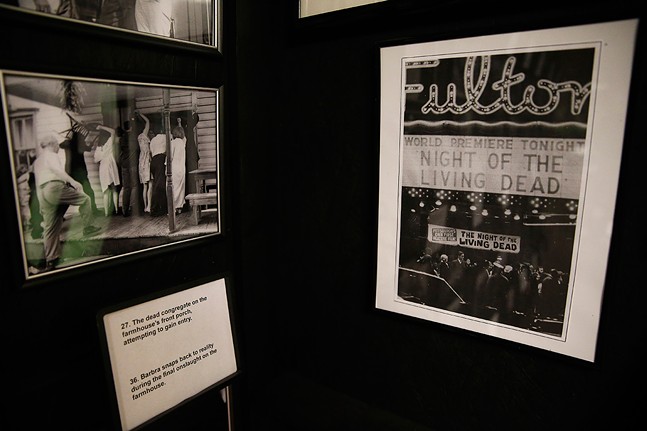 Photo from the Night of Living Dead premiere at Fulton Theater, on display at the Living Dead Museum in Evans City

The Living Dead Museum has spent the last several years hosting events, tours, and special occasions in it’s Evans City location, with the goal of honoring the legacy of late filmmaker George A. Romero, who filmed Night of the Living Dead in the nearby Evans City Cemetery. Now the Living Dead team has announced that it close its current location and relocate to Monroeville Mall, the famous site of the Living Dead sequel, Dawn of the Dead.

A Facebook announcement on the Living Dead Museum website reads that Oct. 16-18 will be the final days the museum and its gift shop in Evans City.

Kevin Kriess, curator and owner of the Living Dead Museum, says the new location – set to open on Sat., Nov. 7 – marks a return to Monroeville Mall, where the museum originally opened at a much smaller capacity in 2008 before moving to Evans City years later.

“We’ve learned a lot,” Kriess says. “With the various projects in different incarnations of our museum and are ready to present the best presentation yet.”


The Monroeville location grand opening will include a Cover-Your-Face Zombie Marketplace being held in the mall’s front parking lot as a way to comply with COVID-19 safety guidelines. (If the name didn’t make it obvious enough, face masks are also required.) The event will include various horror vendors, celebrities from the Living Dead films, and a double-feature outdoor movie event.

Kriess says they were already working on the Monroeville Mall location and that, originally, it was going to serve as a sister museum to Evans City. The plan was to place exhibits there focused on Dawn and, more broadly, on Pittsburgh horror film culture, as well as the mall’s history. This new museum was scheduled to open last spring, but Kriess says the pandemic disrupted its completion.

“The other big effect of the pandemic was a complete devastation of tourism and travel in general over the summer, which would normally be our peak season at the Evans City museum,” says Kriess. “But instead we remained closed for the safety of ourselves and visitors. Much of the funding of that museum relied on the summer tourism and the various conventions and festivals we were a part of.”

This included Living Dead Weekend, an annual event hosted by the museum that invited crowds of horror fans to Evans City for days of fun activities, panels, and celebrity guest appearances.


As a result, Living Dead decided to consolidate the two museums into “one supersized horror and zombie museum in the Monroeville Mall.”

There will also be a Living Dead send-off event in Evans City on Sat., Oct. 17 that includes a double-feature of Night of the Living Dead and Children Shouldn’t Play With Dead Things in EDCO Park.