MMM’s Travel Editor erupts with excitement describing her adventures in New Zealand’s North Island, where the magnificent scenery is shaped by volcanic activity 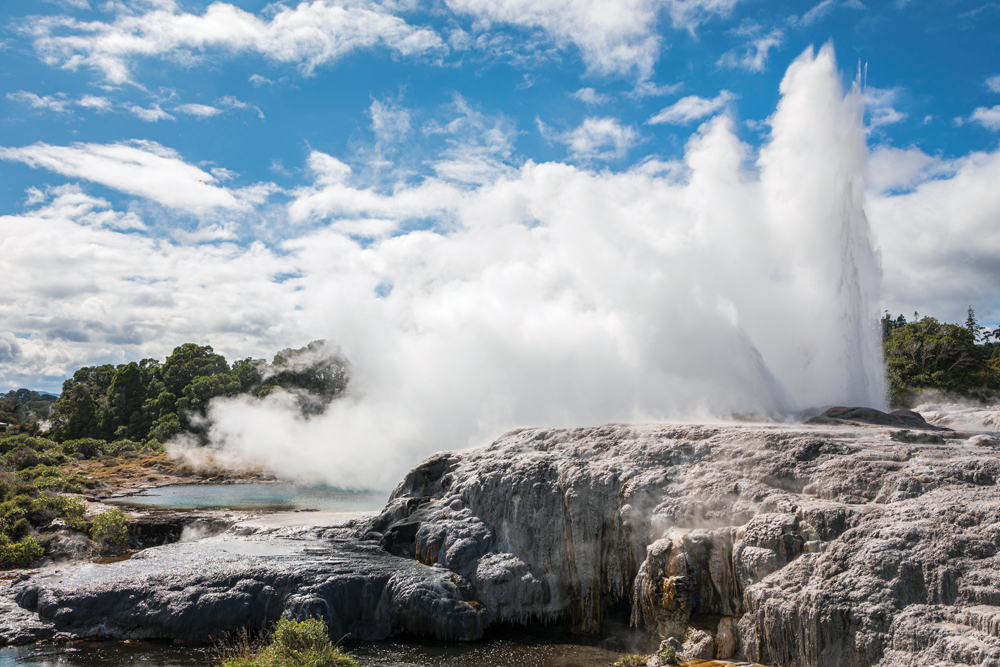 In the middle of dense, primeval-looking vegetation a mud pool bubbled and ‘plopped’. Steam from the magma-heated ground curled above huge ferns. I watched, mesmerised, half expecting dinosaurs to emerge from the ‘jungle’, but this was no scene from a film. This was at the edge of our campsite; I kid you not.

We were in Rotorua, on the volatile Pacific Ring of Fire in New Zealand’s North Island. This is a land where volcanic activity has shaped the extraordinary scenery, where geysers spout 30m (98ft) into the air, black sand beaches are covered with pumice stones and its biggest lake was formed as a result of the greatest volcanic eruption in human history.

An island where a chatty shopkeeper told me that the, “best thing to do on a wet day is to find a hot pool and lie in it up to your neck. You’ll sleep like a baby that night”. Beaches where wriggling your toes into the sand at the Pacific’s edge results in an almighty ‘ouch’ from the searing water below.

Forests where you’re in danger of getting a permanently cricked neck from gazing up at the loftiest ferns imaginable or at a canopy of gigantic redwoods from suspended walkways. It’s an island of incredible natural wonders where, almost as soon as I’d marked a place in my notebook as likely being the highlight of our trip, I’d have to run a line through it as somewhere else made an even mightier impact.

Everything (well, almost) is on such an epic scale in the North Island. Lake Taupo is the size of a small country (Singapore, to be precise). It’s so massive that the curvature of the earth prevents you from seeing from one end to the other. Rotorua boasts the largest active geyser in the Southern Hemisphere.

The most statuesque specimen in the Redwoods Tree Walk at Rotorua shoots up 75m (246ft). This fantastic tree walk is the longest of its kind in the world. Roads have more twists and turns than we’d ever before experienced. A land where, for some villagers, an outdoors dip means languishing in a cobalt blue pool, naturally heated to between 30°C and 50°C by water flowing from surrounding geysers.

Surprisingly, the rotten eggs smell of Sulphur City (as Rotorua is known) and which my brother and I made such a fuss about at the time, barely bothered me. Certainly the eruptions of the biggest geyser of all there, Pohutu (meaning ‘big splash’), astonished me even more than it did when I was nine.

As we neared Rotorua on the Thermal Explorer Highway we could see steam rising from the ground. It was hard to tell what was mist or what was geothermal activity.

At Te Puia thermal reserve next morning (a 15-minute walk from Rotorua Thermal Holiday Park) I watched, awestruck, from an upper terrace, as Pohutu started huffing and puffing and building up steam, before reaching its peak and venting continuously for about half an hour (it can vary from minutes to several days). Astounded by the force that sent steam and spray skywards, I couldn’t resist going back for second – and third – blasts of Pohutu.

You’re alerted to Pohutu’s upcoming appearance by the eruption of its ‘indicator’ geyser, Te Tohu (aka the Prince of Wales’ Feathers, which is just what it looks like). Standing as close as was allowed, I waited for Pohutu to blow (it erupted about twice an hour when we were there, but this varies), then perched – but not for long – on flat rocks so hot that there were warning signs about them, at the same time watching out for possible steam vents. Steam drifted across the turquoise pond beside Pohutu; this is the pool used by residents of Whakarewarewa next door. Back at the site, husband Robin bathed in its mineral pools (36-40°C), thankfully emerging not quite so sulphurous smelling as I had expected.

TOP TIP If you bathe in any geothermal pools, you must not submerge your face/head, to avoid the risk of amoebic meningitis (thankfully, rare), and remove all jewellery to prevent damage. 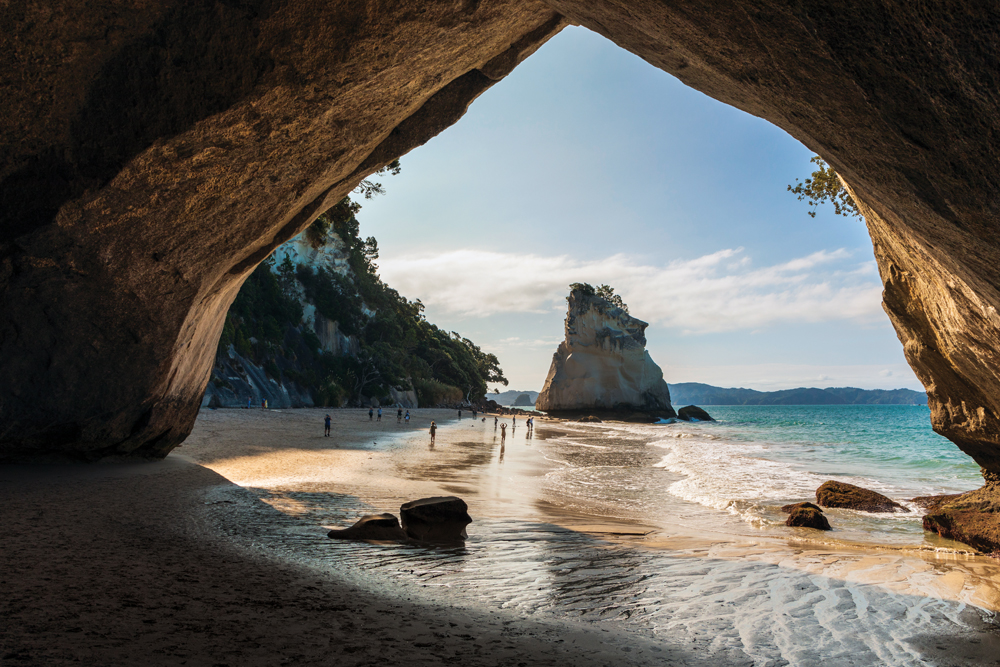 I found my own really ‘hot spot’ at Hot Water Beach (where else?) on the Coromandel. Paddling near where I could see vapour rising, I shrieked as scalding water stung the soles of my feet as I dug them into the sand. Robin thought that I was exaggerating and followed me, instantly leaping and ‘ow’ing. We must have picked the too-hot-spot because other tourists were relaxing in pools naturally heated by springs seeping up through the sands (you can hire spades to dig out your own ‘bath’).

If I absolutely had to pick one moment from our North Island exploration as the most outstanding, it would be at Cathedral Cove on the Coromandel. The footpath there along the clifftop is gorgeous in itself. During the summer months, a shuttle service (NZ$5/£2.72 return) runs from the car park on Pa Road to the start of the Cathedral Cove track, or it’s about a 35-minute walk to the start of the track.

Then you descend to a secluded cove where the cavernous arched tunnel, separating two white sand beaches, makes the perfect frame for one of the most pictured tableaux in the Southern Hemisphere, with a gargantuan sea stack taking centre stage. I could have stood there forever – but the tide was coming in!

I have to say that all of the Coromandel is heavenly: 400km (249 miles) of stunning coastline, sensational beaches and with rugged volcanic hills cloaked in the native rainforest through its middle. State Highway 25, which loops around the peninsula, has to be one of the best-ever routes we’ve driven for ‘wow-ing’ scenery, looking over a vivid blue ocean with so many islands, so many appealing coves.

After Waihi it snakes above precipitous drops. Verges are thick in places with introduced pampas grass, whilst ancient pohutukawa trees (also called the New Zealand Christmas tree, because of its mass of crimson flowers in December) line the western side of the peninsula.

Much too soon, the distinctive Sky Tower of Auckland (328m, 1,076ft) came into focus far across the Firth of Thames, a jolting reminder that our amazing antipodean odyssey was coming to an end.

TOP TIP To get to Auckland city centre (Britomart station) from Ambury Regional Park, we parked at Onehunga station (free), a 10-minute drive away and caught a half-hourly train, which takes about 35 minutes and costs NZ$11 (£5.98) return each 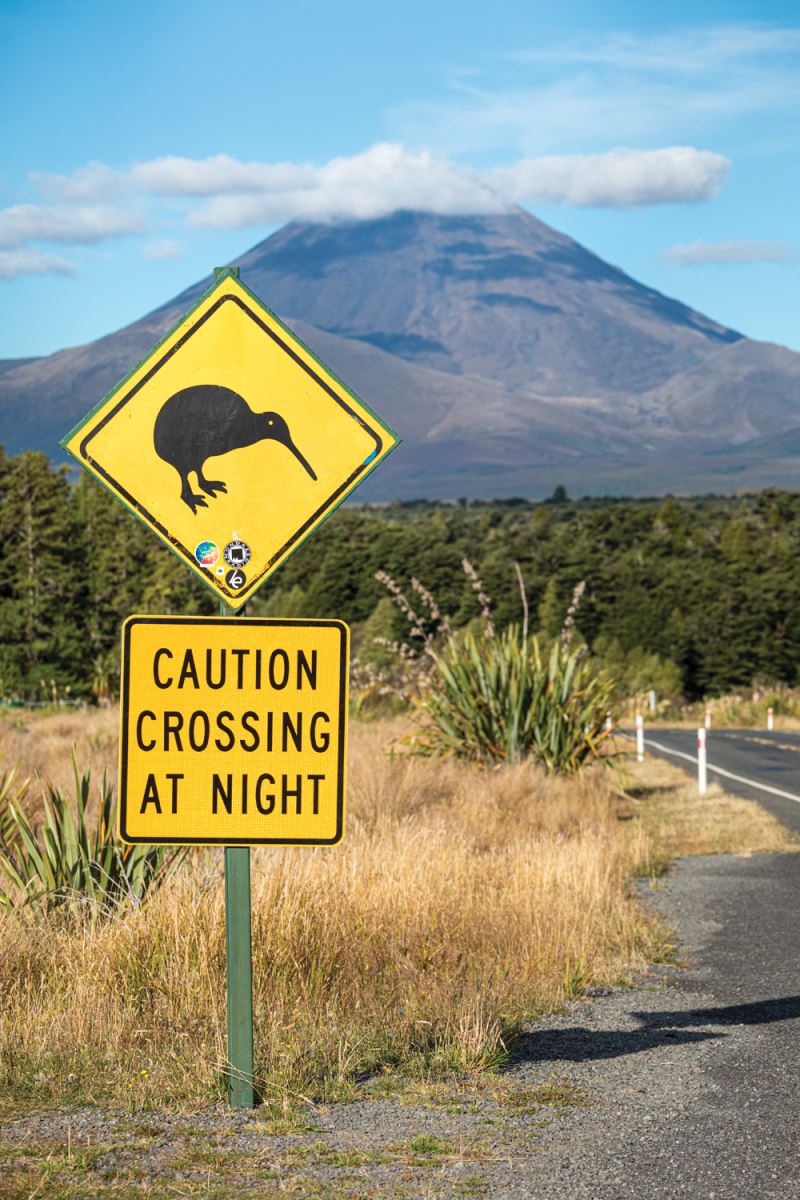 A volcano, Mount Ngauruhoe, pierced the horizon as we crossed the Tongariro National Park. It was getting late as we reached the park village of Whakapapa and lots of other campervans were circling in an increasingly desperate fashion. The campsite was full and the CamperMate app had, very annoyingly, wrongly indicated likely places, but all the car parks had ‘no camping’ signs. Again, a local helped us out, suggesting a quiet location up a nearby lane.

Next morning, we took the upper trail to Taranaki Falls (two hours), striding across moorland covered with heather and red tussock grass, conscious of the brooding presence of the volcano and crossing eroded gullies, the layers of which indicate successive eruptions. In the blazing sunshine, Taranaki Falls appeared like an oasis, with hikers picnicking on the volcanic rocks as water tumbled 20m (66ft) over the edge of a lava flow that erupted from Mount Ruapehu 15,000 years ago.

Returning via the very welcome shade of the lower path, we undulated through alpine shrubland and beech forest alongside the pretty Wairere Stream.

TOP TIP Book your campsite around Tongariro well ahead 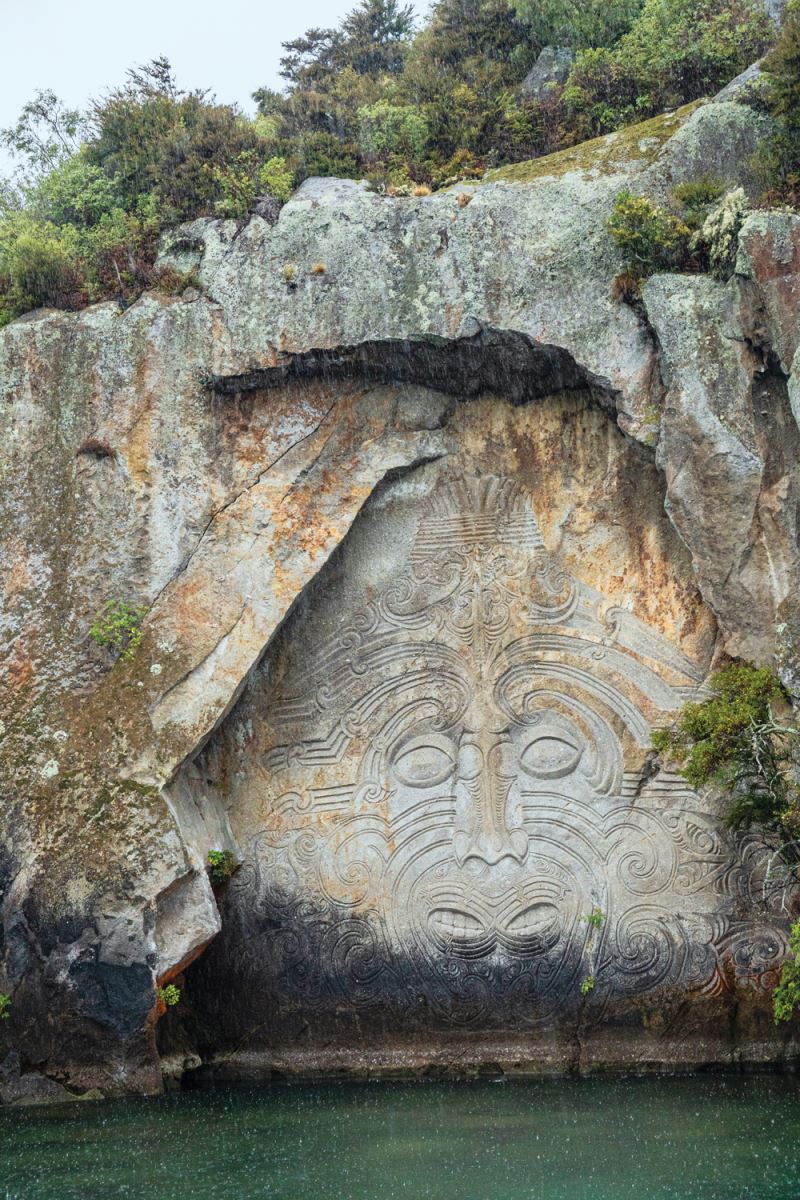 Surprisingly for a sunny Sunday, State Highway 1 – which traces the shores of Lake Taupo –  was incredibly quiet, the only figures around were a lone paddleboarder, a family playing on a wedge of gritty black sand and a bevy of black swans.

The beach opposite New Windsor Lodge campsite at Five Mile Bay is covered in pumice stones of all shapes and sizes and I pocketed a few for pedicure treats. There are easy walks and bike trails around the lake, but what we’d gone to Lake Taupo for were the Maori rock carvings at Mine Bay, which are only able to be seen from the water.

For most of our travels in New Zealand the weather had been glorious. As luck would have it, the day of our excursion to see the carvings was the wettest of our entire trip. Scattering black trout, our replica steamboat, the Ernest Kemp, chugged across the vast lake to reach the rock alcove, the canvas for this sacred art.

The artist’s grandmother had asked for a likeness of her 800-year-old ancestor, Ngatoroirangi, a powerful priest, on a totara tree. There was no totara at Taupo, so the artist looked to the lake for inspiration.

The carvings, rising 14m (46ft) above the lake, are among North Island’s most popular tourist attractions. What I particularly liked were the smaller, more intricate, sculptures around Ngatoroirangi’s ‘face’, depicting tupuna (ancestors) and kaitiaki (guardians), including the taniwha (Maori water dragon).

TOP TIP For baby-soft feet, pick up some pumice stones from the shores of Lake Taupo 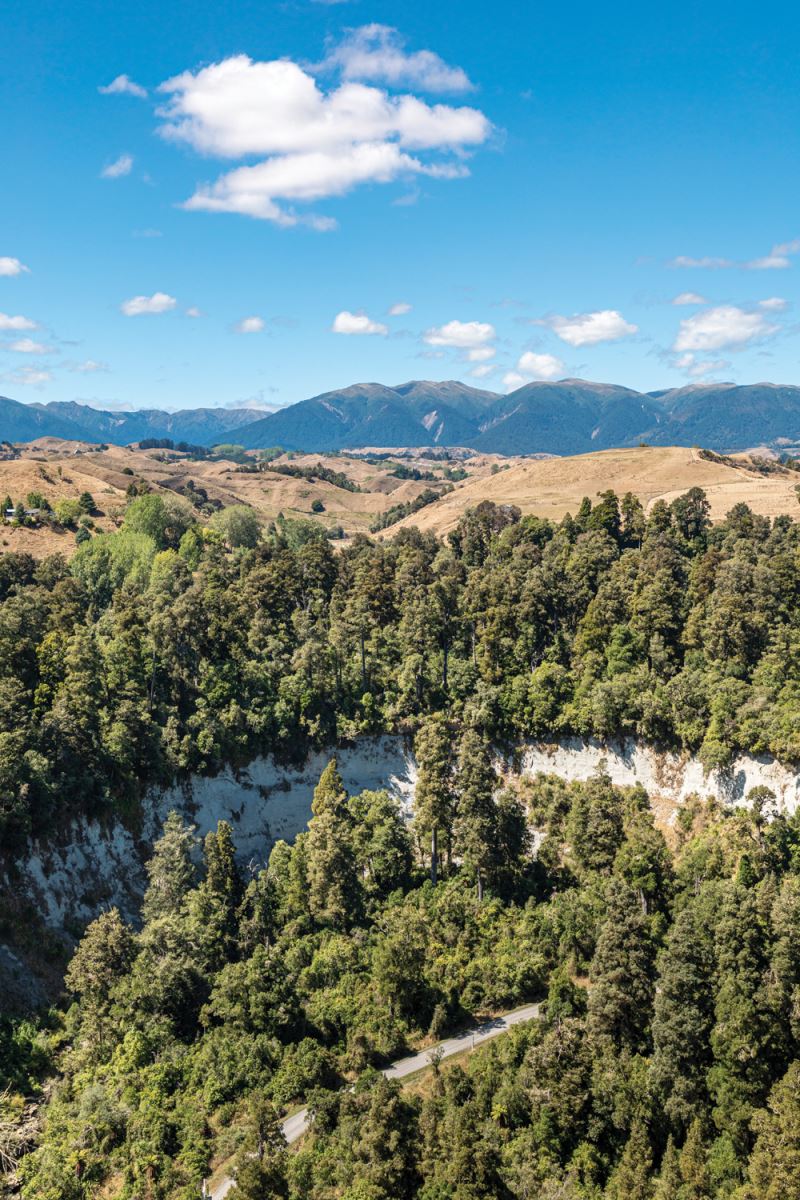 Our gentle spin, through the Pohangina Valley to Apiti, on the Manawatu Scenic Route, with the road mostly to ourselves, was one of our most enjoyable days. Ruahine Dress Circle Scenic Reserve, above a swimming hole with a waterfall, made a delightful lunch spot. Our wild camping the night before had been that idyll by the Pohangina River at Raumai Reserve.

At Totara Reserve Regional Park (off the Manawatu Scenic Route near Pohangina village), we marvelled at the size of the tree ferns on the 5km (three-mile) Fern Walk, the almost other-worldly atmosphere of this ancient native forest enhanced by so few other people about. 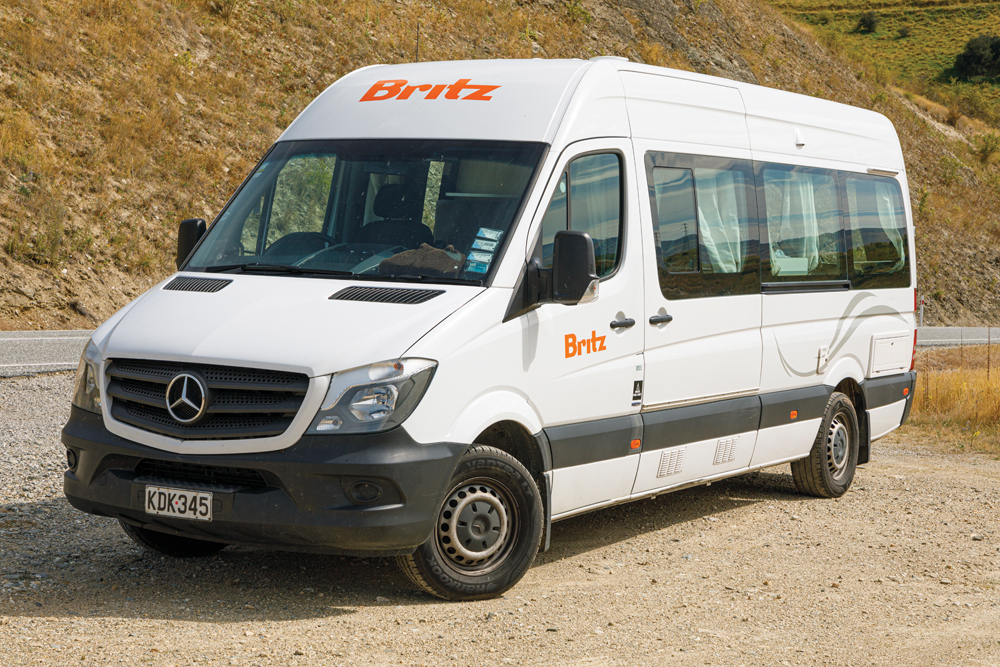 Having already toured the South Island, we drove from the ferry near Wellington and spent 11 days exploring the North Island in March in a hired campervan (see part one of our adventures for full details of this camper from Britz).

We spent one night in an Auckland hotel before our flights home, one of which was nearly 18 hours. For Part One of our adventures. All figures, except flights, for North Island only. Campervan hire for entire 21 days of our trip; (NZ$4,765) £2,591.08. Sterling calculations worked out from exchange rates in July 2020.

Helen Werin is MMM’s Travel Editor and spent a very happy part of her childhood in New Zealand, but this was her first return visit and, hopefully, won’t be her last.