Sports Pulse: NASCAR driver Kurt Busch on what Michael Jordan can expect coming into the sport.

In an essay posted on his website Sunday night, Kyle Larson acknowledged he was “rightly suspended” by NASCAR and fired by Chip Ganassi earlier this year for the racial slur he used on iRacing.

Larson, 28, used the N-word over what he thought was a private radio channel. Instead, it was broadcast across a livestream and quickly made the rounds on social media. NASCAR was shut down because of the pandemic at the time, but within a day, Larson lost his sponsors, manufacturer support, and job, and he hasn’t raced in the Cup Series since.

“Auto racing is my passion,” wrote Larson. “During the NASCAR off-season, I’ve sometimes competed overseas. On one of these trips, I was around a group that used the N-word casually, almost like a greeting. Of course, it doesn’t matter where this happened, how the word was used, or what the people around me did. The fact is that the word was said in my presence, and I allowed it to happen unchecked. I was ignorant enough to think it was OK, and on the night of the esports event, I used the word similarly to how I’d heard it. As I write this, I realize how ridiculous, horrible, and insensitive it all sounds.

“And what makes it even worse is that I truly do know better.” 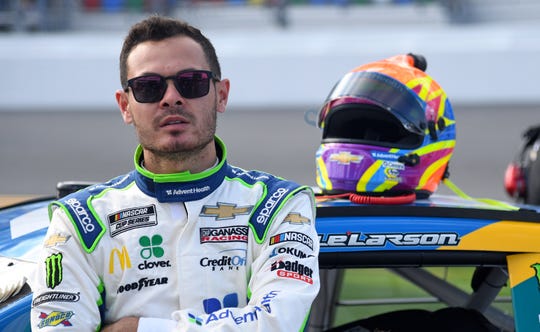 Kyle Larson was suspended by NASCAR on April 13 after using a racial slur during an iRacing event. (Photo: Mike Dinovo, USA TODAY Sports)

Larson went on to say there was no excuse for his ignorance, and how his actions hurt many. During his time away from NASCAR, Larson has worked to educate himself on a Black person’s experiences in America, and he also hired a diversity coach.

Much of Larson’s essay is about the work he’s doing to better himself, like visiting the Urban Youth Racing School, volunteering at food driver in Minnesota, and returning to the state after the death of George Floyd to see a memorial and understand the reaction of the community.

Some of the work has been conversations with fellow Black drivers like Bubba Wallace, J.R. Todd from the NHRA, and Willy T. Ribbs.

“The first lesson: The N-word is not mine to use,” Larson wrote. “It cannot be part of my vocabulary.”

OPINION: What Michael Jordan could do for Bubba Wallace and NASCAR

Before returning to NASCAR is possible, Larson must complete sensitivity training as part of his indefinite suspension. Larson said he did go through the program, and he does hope to race in the sport again. Silly season has Larson linked to a ride at Hendrick Motorsports.

“After I said the N-word, anger came at me from all angles,” continued Larson in the post. “Being labeled a racist has hurt the most, but I brought that on myself. What I didn’t expect, though, were all the people who, despite their disappointment in what I did, made the choice to not give up on me. It motivates me to repay their faith by working harder, not giving up on myself, and making sure something positive comes from the harm I caused.

“For far too long, I was a part of a problem that’s much larger than me. I fully admit that losing my job and being publicly humiliated was how I came to understand this. But in the aftermath, I realized that my young kids will one day be old enough to learn about what their daddy said. I can’t go back and change it, but I can control what happens from here on out.

“I want them to know that words do matter. Apologizing for your mistakes matters. Accountability matters. Forgiveness matters. Treating others with respect matters. I will not stop listening and learning, but for me now, it’s about action – doing the right things, being a part of the solution, and writing a new chapter that my children will be proud to read.

“People have taught me a lot over the last five months. The next time I’m in a classroom, I hope I can repay their kindness by sharing my story so others can learn from my mistakes. Making it a story I’m proud to tell is completely up to me.”