President Donald Trump says he’ll announce his decision on a Supreme Court nominee to replace the late Justice Ruth Bader Ginsburg this Saturday at 5pm. He says he has “a constitutional obligation” to make sure nine justices are seated. (Sept. 22)

WASHINGTON – President Donald Trump said Wednesday he wants a nine-member Supreme Court as soon as possible in case the justices have to decide cases challenging the results of his own presidential election.

“I think this will end up in the Supreme Court, and I think it’s very important that we have nine Justices,” Trump told reporters after discussing election issues with a group of Republican state attorneys general.

Having a ninth justice avoids the prospect of a tie vote in an election case, Trump said: “I think having a 4-4 situation is not a good situation.”

Political opponents said Trump wants an ally on the Supreme Court to increase the chances that any disputes would be decided in his favor. “Donald Trump knows the only way he remains president is by stealing the election,” tweeted The Lincoln Project, an organization that produces anti-Trump commercials.

Other legal analysts said the process should not be rushed so close to a tense and tight election.

“Supreme Court justices serve for life and make decisions that impact every American,” said a statement from the League of Women Voters. “They require a thorough vetting process that is transparent to the American people. Such a process would be undermined if rushed through.”

More: Justice Ruth Bader Ginsburg to lie in state at US Capitol Friday after two days at Supreme Court

Trump said he plans to announce his nominee to replace the late Justice Ruth Bader Ginsburg at 5 p.m. ET on Saturday. He also repeated that he expects the Republican-run Senate to confirm his nominee by Election Day on Nov. 3.

“I think we should go very quickly,” Trump said. “You see the Republicans are very united.”

Despite protests from Democrats, Trump and the Republicans are moving forward with a turbo-charged fight over the Supreme Court, this one in the final six weeks of a presidential election.

The GOP sees it as a once-in-a-lifetime opportunity to cement conservative dominance over the nation’s highest court for decades. If Trump’s nominee is confirmed, conservatives would have a 6-3 advantage over the court’s progressive members.

Democrats said the Republicans are seeking to rush through a nominee in the heat of a presidential election, something they blocked President Barack Obama from doing in 2016 after the death of Justice Antonin Scalia.

Trump “shouldn’t even be nominating a replacement to Justice Ginsburg’s seat so close to an election,” said Sen. Dianne Feinstein, D-Calif., the top Democrat on the Senate Judiciary Committee that will hold hearings on the nominee.

“This entire process is a charade,” she said.

Trump and aides have argued for days that one of the reasons to proceed is to make sure the court has full membership by the end of the year – partly because of the prospect of election lawsuits.

“You’re going to need nine justices up there,” Trump told reporters on Tuesday.

Hours later, Vice President Mike Pence told the Fox Business Network that the prospect of a Supreme Court fight over the election is a reason the Senate should confirm a new justice before Nov. 3.

“With all of the talk about universal, unsolicited mail-in ballots, where we have states around the country that are now extending the deadline, there is a possibility that election issues could be coming before the Supreme Court in the days after the election,” Pence said. “And all the more reason why we should have nine justices on the Supreme Court to be able to resolve any issues that may arise.”

Trump has blasted mail-voting throughout the campaign, warning without evidence that it is more fraudulent that voting in-person person. His position shifted in recent months to single out “universal” mail-voting as posing the biggest danger for voter fraud and threat to democracy.

But only nine states and the District of Columbia are holding universal mail-in elections –in which ballots are automatically mailed unsolicited to all registered voters without needing to first request one. Five of those states planned to hold all-mail elections even before the pandemic and only one of those states – Nevada – is considered a battleground in the race for president.

A federal judge on Monday dismissed a lawsuit from the Trump campaign that sought to overturn Nevada’s vote-by-mail law, ruling that the campaign lacked standing.

Rather than universal mail-voting, voters in swing states like Florida, Arizona, North Carolina, Pennsylvania, Michigan and Wisconsin have the option of requesting mail-ballots. Because of the pandemic, states have received a record number of requests dominated by Democratic voters. Mail-voting in several states is already underway.

Anticipating a contested election, Democratic operatives have warned of a “red mirage” on election night as in-person election results – expected to favor Trump and perhaps show him ahead in many states – are initially reported before a record volume of absentee ballots that could skew toward Biden are counted in the days that follow.

On Wednesday, Trump described mail-in voting plans as a “scam” that “will be before the United States Supreme Court.”

In seeking to fill the new vacancy, Trump interviewed one of the leading candidates on Monday, Indiana-based appeals court judge Amy Coney Barrett.

Boston loses its luster as a Labor Day destination

Thu Sep 24 , 2020
The study was culled from year-over-year flights and hotel reservations. It found that Labor Day demand had dropped primarily in urban areas. New York, which was the fifth most popular destination last year, dropped to 19th this year. Last year’s top Labor Day destination, Denver, was replaced by Las Vegas. […] 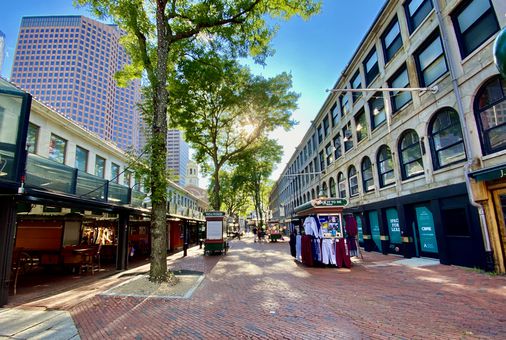