CLOSE Fleeing traffic stop occurred in Harrison Township. Chase and crash was on I-94. Happened Thursday. Detroit Free Press Fleeing a traffic stop and ramming police vehicles during a pursuit on I-94 were among the problems a couple gave Macomb County sheriff’s deputies this week. But they won’t be going anywhere […]

Fleeing traffic stop occurred in Harrison Township. Chase and crash was on I-94. Happened Thursday.

Fleeing a traffic stop and ramming police vehicles during a pursuit on I-94 were among the problems a couple gave Macomb County sheriff’s deputies this week.

But they won’t be going anywhere as they also have warrants out of New Mexico for receiving and concealing stolen property, sheriff’s investigators said Friday.

Jamie Storing, 31, of Clinton Township is charged with fleeing a police officer and two counts of assault with a dangerous weapon. Her boyfriend, Jacob Cuellar, 28, of Albuquerque, New Mexico, is charged with carrying a concealed weapon.

Investigators said they both live in New Mexico and were visiting Storing’s family in Michigan.

Authorities said a pickup truck ran a red light at Crocker and Harper, and deputies made a traffic stop near Crocker and Reimold in Harrison Township about 12:20 a.m. Thursday. When a deputy approached, the truck took off and went onto nearby I-94 eastbound.

Sheriff Anthony Wickersham said the speed of the pursuit hit 80 mph at times, left I-94 onto 23 Mile in Chesterfield Township, and continued back onto I-94 eastbound toward Port Huron. It lasted about 15 minutes, he said.

Deputies put out stop sticks, which the truck hit and lost its front driver’s side tire, slowing it down. Dash camera video shown at a press conference show sparks coming from the truck, which authorities believe was the truck riding on the rim.

One police vehicle was hit from behind and sent off I-94 into a field. The driver hit another deputy’s vehicle and became locked on its push bumper. The truck hit a guardrail, and the police vehicle crashed into the truck’s side door, the sheriff’s office said.

The truck stopped on I-94 near Meldrum in St. Clair County, and its occupants were taken into custody without incident.

The deputy who was struck and sent off the road was treated at an area hospital.

Investigators found a 22-caliber gun in the truck. Cuellar told deputies he did not have to register his firearm in New Mexico.

Wickersham said the pair may have taken because of their warrants in New Mexico.

Sat Oct 3 , 2020
SPRINGFIELD, NJ – While the Township of Springfield observed National Pride Month with its annual flag raising back in June, COVID-19 made the annual event hard to celebrate together. To continue spreading the much-needed pride spirit throughout 2020, the Springfield Recreation Department was persistent in keeping their promise by hosting […] 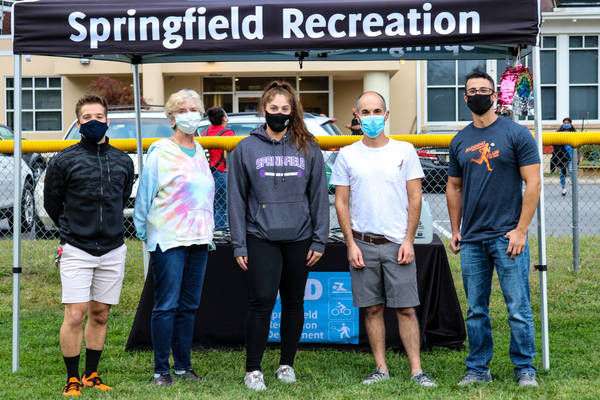