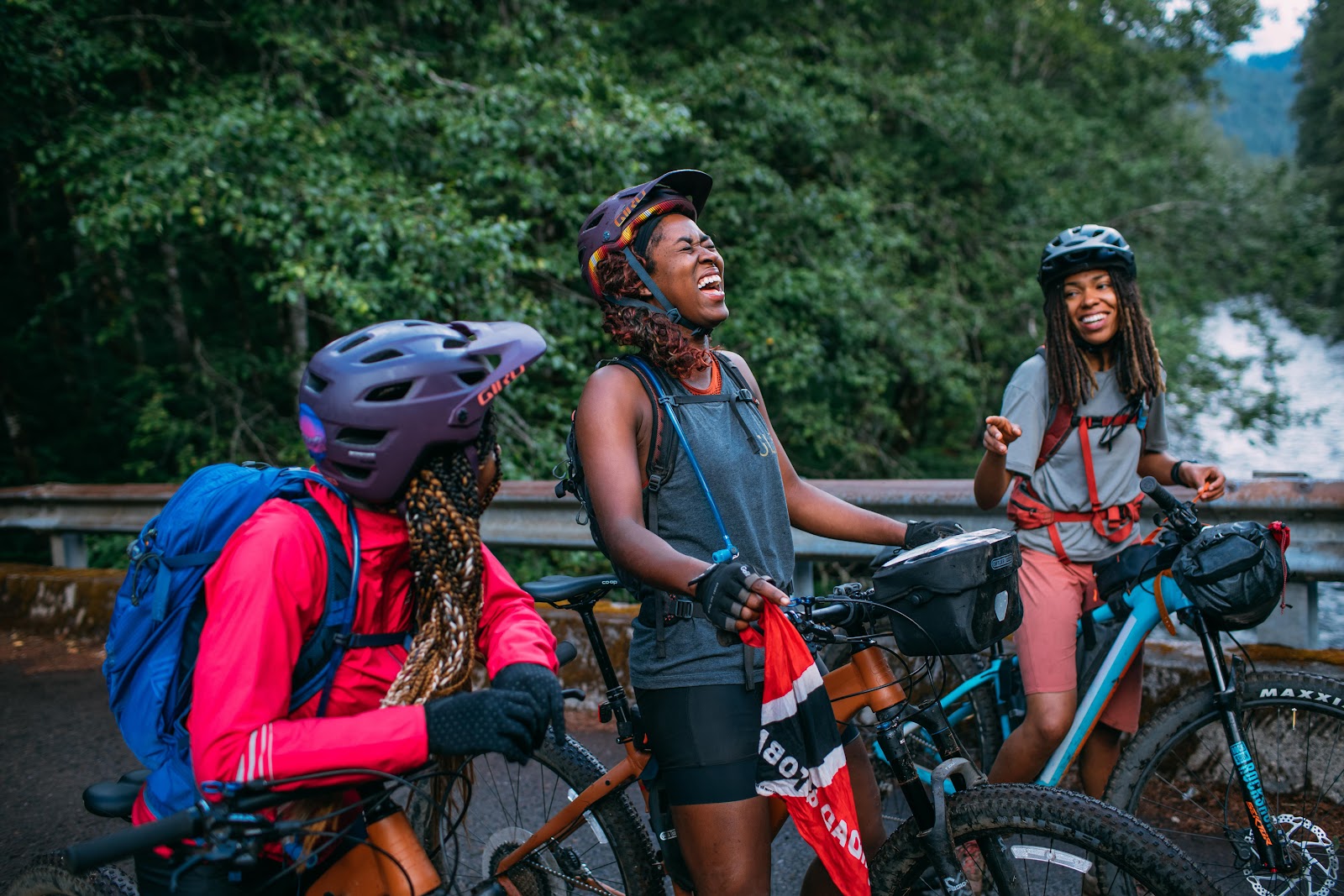 This week in Women in the Mountains, we sat down with director and filmmaker Analise Cleopatra. Cleopatra co-directed the short film ‘Pedal Through’ which explores the strength and healing that comes from pushing yourself in the outdoors. Alisa Geiser photo.

Even though her body was exhausted from her first day of pedaling the Three Sisters Three Rivers bikepacking route in Central Oregon, Analise Cleopatra couldn’t bring herself to fall asleep just yet. It was a crystal clear evening, the kind where you can spot almost any constellation in the sky. As an avid star watcher, Cleopatra positioned herself next to the lake to admire the view and photograph the night sky.

She wasn’t sure what to expect when she decided to go on her first-ever week-long bike packing trip—certainly not sparkling starscapes or breathtaking waterfalls. Up until this moment, she had never slept a night in a tent. Never explored the backcountry. Never ridden a bike off the pavement. Going into this adventure, she knew she’d be out of her element, but moments of awe and healing—like this one—quickly taught her that pushing through the discomfort and uncertainty was ultimately worth it.

Cleopatra was joined by her best friend DeJuanae Toliver—also a newcomer—and professional mountain biker Brooklyn Bell, who helped mentor the two new riders. Starting in Sisters, Oregon, this all-female black cycling team rode everything from dry deserts to lush rainforests until six days later they arrived at their final destination in Oakridge. Over the course of 132 miles, the team navigated the many ups and downs of bikepacking while never losing sight of their main goal: finding joy in the outdoors. The whole adventure was intimately documented by Cleopatra and a small film crew for the powerful film
Pedal Through. We caught up with Cleopatra to hear more about the project, and why being a complete newbie is all part of the process.


Aside from just going bikepacking, you also directed the project. Tell us about that.

Analise Cleopatra: Yes! This was actually the first film that I’ve directed. Before Pedal Through I’ve done some experimental film but nothing to this kind of production or scale. I went to design school for graphic design and I’ve been going to art school since middle school. You could describe me as a classically trained artist, but as far as film, I’m not formally trained. I think I got inspired to dabble with it from my work in graphic design and art direction. Over time I found myself wanting to have more power over the stories that are told to us.

Something you’re rather open about is how camping, mountain biking, and bikepacking felt so new to you before going on this adventure. Did you have many experiences in the outdoors before this trip?

AC: No, not many. I’ve been on hikes in the Portland area but never any overnight or adventures that required a big drive or something. 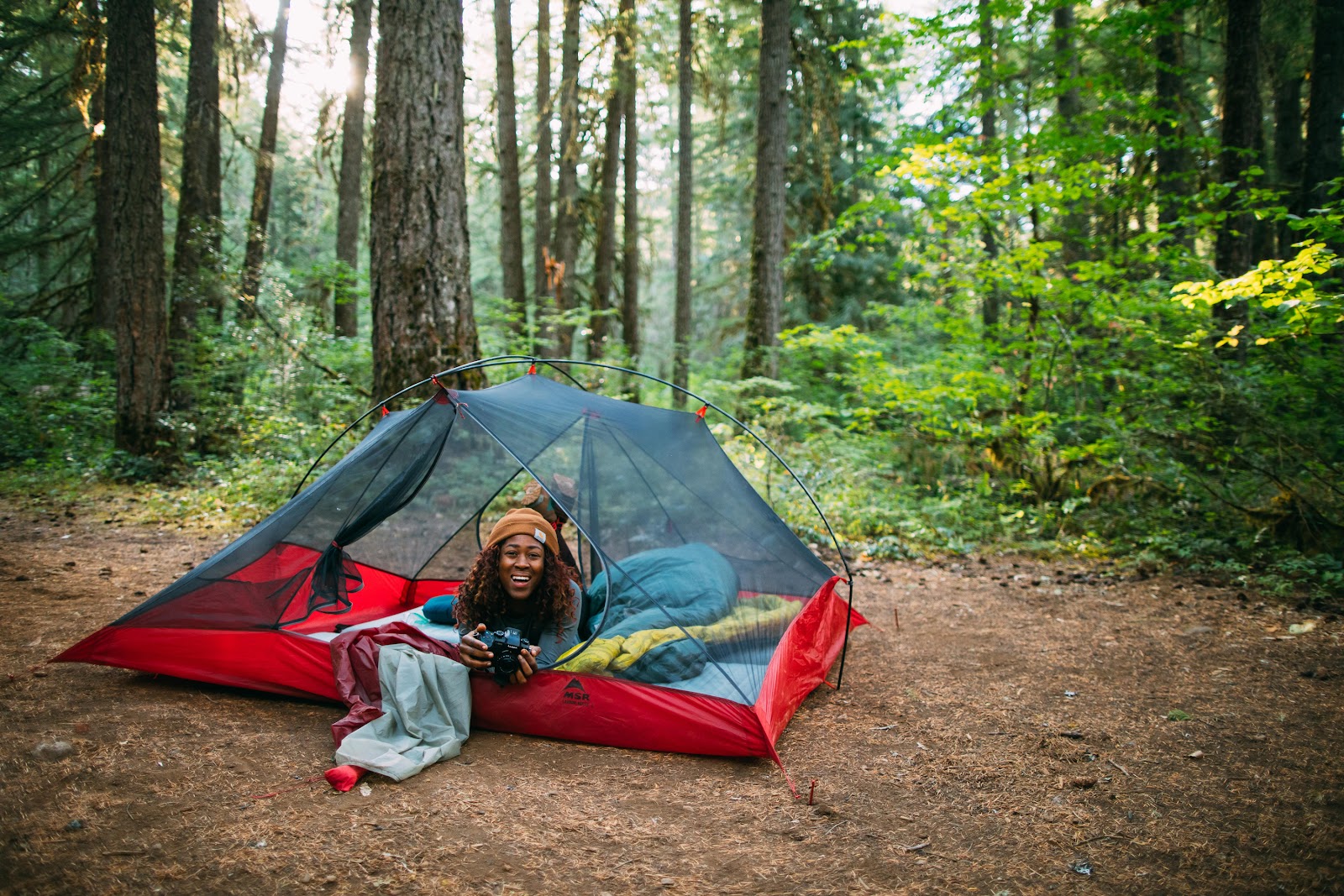 As a complete newcomer to mountain biking and camping, Cleopatra candidly shares all the intimate foibles, fear, and joy while finding her place in the outdoors. Aly Nicklas photo.

What prompted the idea for this film?

AC: The co-director for this project Aly Nicklas was a friend and colleague of mine. I’ve worked alongside her on a number of different film projects. I was doing some voice work for her when she discovered the grant from the Oregon Made Creative Foundation and Travel Oregon. She reached out to me and invited me to do this film with her, and we pretty much submitted the grant a few minutes before it was due. It came together really quickly. Aly is an avid mountain biker. She refers to herself as a “newer mountain biker”, but she’s been riding for about five years. She suggested a bike film as an idea. At that point, I had never ridden a mountain bike before, but I was willing to try and see what it was all about.

Are you pretty hooked on mountain biking?

AC: Yeah, it’s really cool. I really enjoy how humbling it is. I’m a pretty competitive person by nature. I went to art school for most of my life, so my school didn’t have sports. However, you don’t want to see my family play Taboo—it gets very intense so quickly. I think it was really good for my spirit to be challenged by mountain biking and go hard at something but not have it be a competition. Even when it comes to art and design, I feel like I’m constantly competing with friends, colleagues, or classmates. In art, that’s just how you grow: by critiquing the hell out of each other’s work and trying to be better with everything that we do. I found mountain biking to be refreshing but I didn’t feel the need to be competitive. 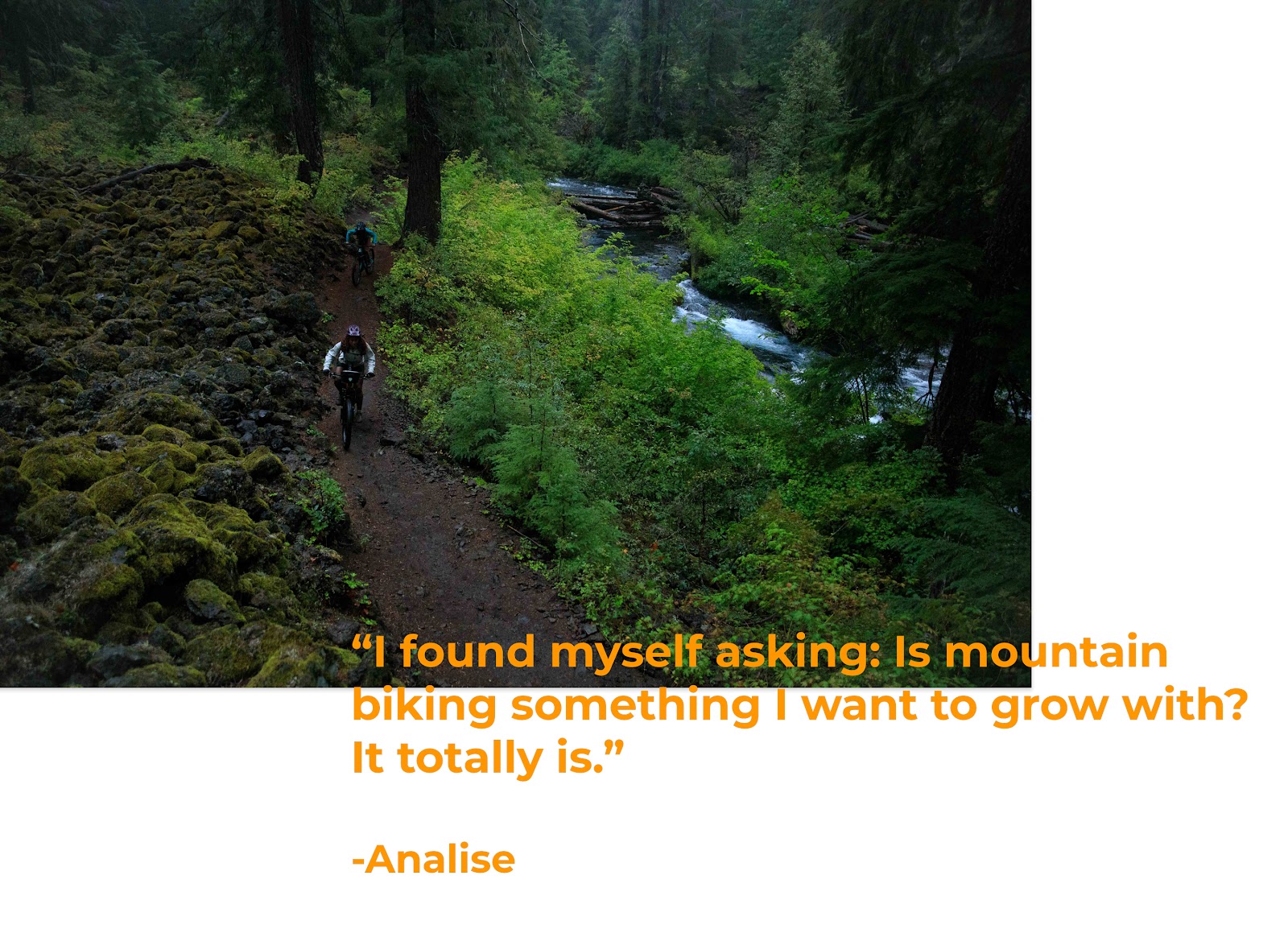 What were some of the challenges you faced going into this bikepacking trip?

AC: I think the balance of trying to be prepared for anything while also going with the flow was a big challenge for me. There were a few days where we had really good weather, so I logically thought to myself, “Oh, I won’t need this jacket today.” I ended up lightening up and would later learn that I actually needed that jacket for the day. I found myself trying so hard to avoid these rookie mistakes, but needing to move quickly to not keep the team from missing our goalposts. I think constantly managing those things was a challenge for me. During the big hill climb, I had to confront my feelings of shame. I was frustrated about frequently stopping and struggling through the whole climb. It made me feel really weak and I hated that. Pushing through to grow from that, I think was a big personal challenge for me.

It comes back to that feeling of humility while mountain biking, doesn’t it?

AC: That’s exactly it, humbling. But I kind of love that because it’s a reminder that if you’re not good at something it’s fine. You’re still moving, the world’s not ending, and no one’s like mad at you—and that’s okay. It’s okay to suck at something when you first start, but what matters is you keep going. I found myself asking: Is mountain biking something I want to grow with? It totally is.

What were some of your favorite moments from the trip?

AC: The second night we camped at this Big Bear lake and it was so beautiful. I stayed up to watch Saturn set and got this perfect picture of the stars. And then I accidentally deleted it. It just made me accept this fleeting beautiful moment. I was just really happy that I was able to capture the stars. It was so beautiful out there, you could see the stars and Milky Way reflecting on the water. I love the stars, so much so that I’ll even track them. I’ll text my friends “happy new moon” and all that stuff. So, it was really fun to feel that much closer to them. When I’m in Portland, I’ll track the meteor showers. Actually going to see them was just always a hassle because I could never find someone to join me. They usually happen on a weekday at like 2:00 AM, and then you have to drive at least an hour and a half. So this was pretty special because I didn’t have to ask anyone. We were right there under the stars!

The film also explored the idea of mentorship. How was it learning from someone like Brooklyn Bell?

AC: She’s a master at her craft. Following behind her on the bike was really helpful because the lines that she chose just seemed to make everything easier. She also shared some basic tips that really helped—like keeping your pedals level. She showed her leadership in those ways by keeping us safe on the trail, keeping us together, and directing us. I would definitely call her a pioneer. 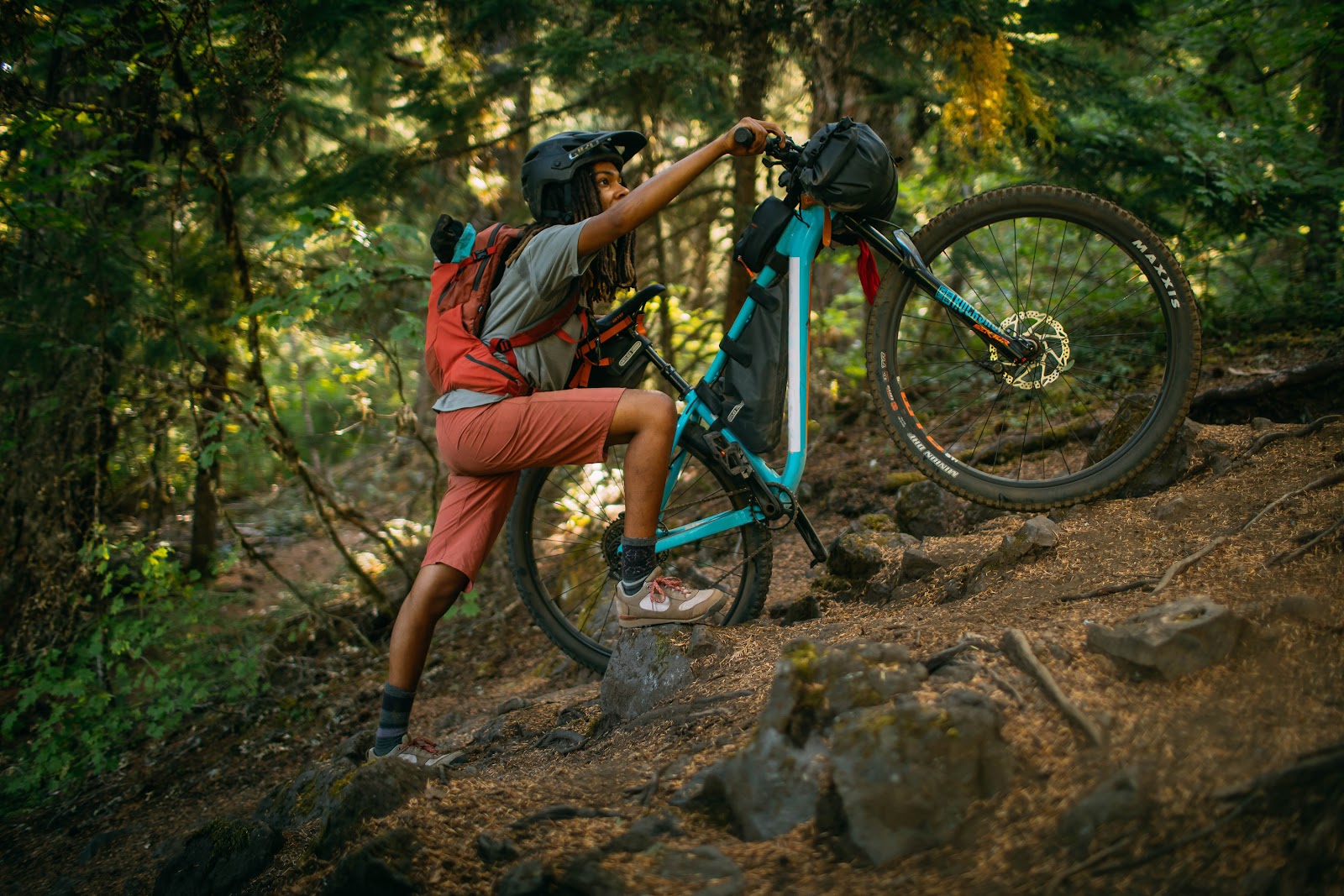 Brooklyn Bell has become a champion for inclusivity and diversity in the outdoors. Aly Nicklas photo.

This is the first mountain bike film I’ve seen featuring multiple people of color and that’s so exciting. What kind of feedback have you received following the film’s release?

AC: Most of the feedback has been very positive, which is really heartwarming to see. You know, most films deal with a delicate balance of recognizing how the world is and depicting what the filmmaker wishes. The balance of those two ideas all depends on the filmmaker. I definitely intended there to be an aspirational part of the film where other Black women could envision themselves biking with their friends, healing, growing, and enjoying the outdoors.

I think we’re in a space right now where there are all kinds of opportunities to reimagine recreation.

I just hope that this project can feel like an open invitation to other people of color in the same way that Aly invited me to join this project and the biking community. 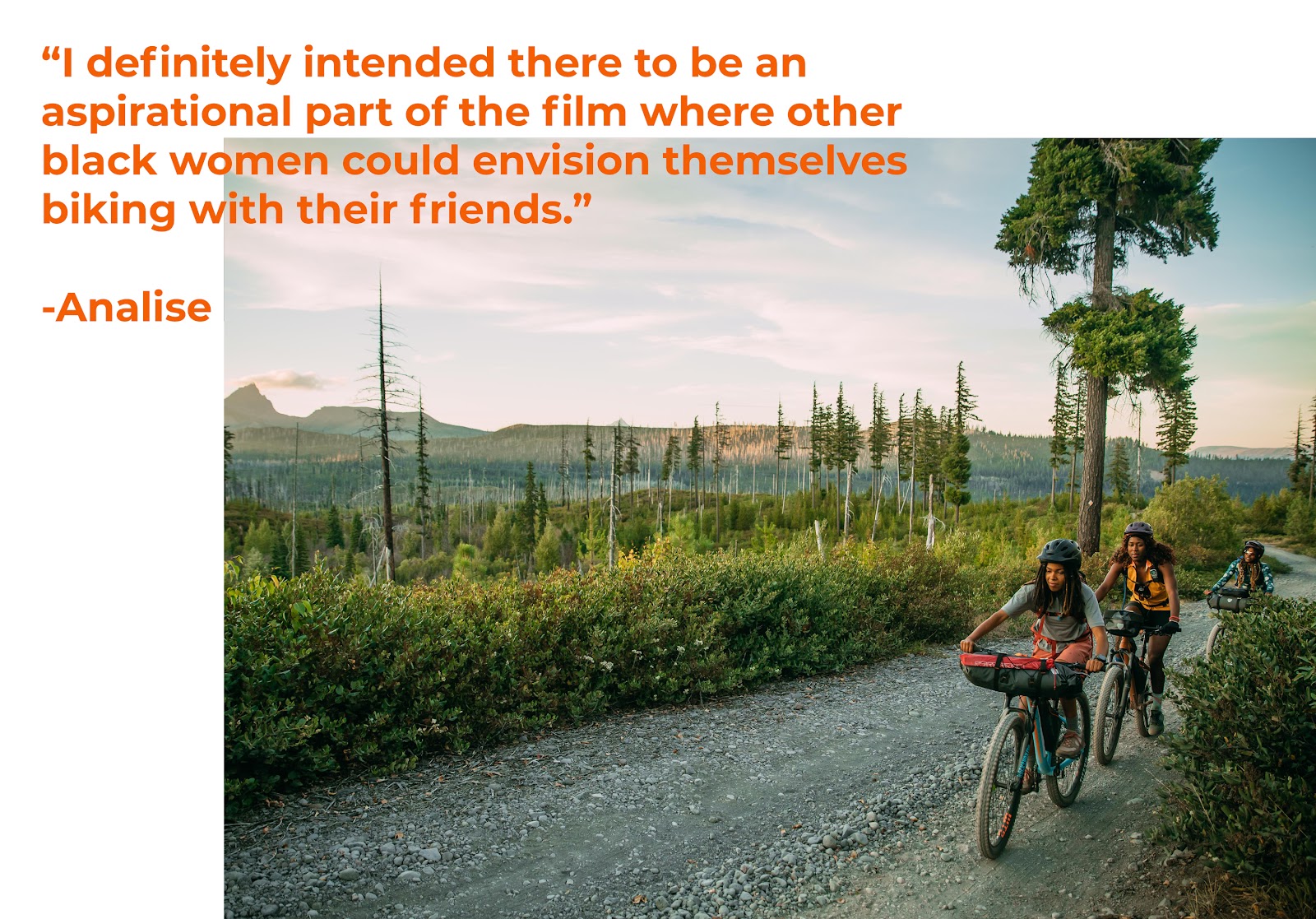 How would you suggest ways that we can include more people of color in sports like mountain biking?

AC: I think the first step has to be awareness. For example, I fought hard for Soca music to be included in the film because I knew Caribbean people would see that scene and relate to it on that cultural level. I think you have to find a way to meet people where they’re at. That’s something I hope to keep exploring because I consider the Caribbean an under the radar mountain bike destination. If the borders were open, I would be in Tobago right now biking and living my best life on the Island.

Diversity requires stepping outside of your comfort zone and engaging with folks who might not be in your immediate circle. It means finding ways to work with them as equals in the process and not recreating the same story that happens to just have a brown person into the narrative. 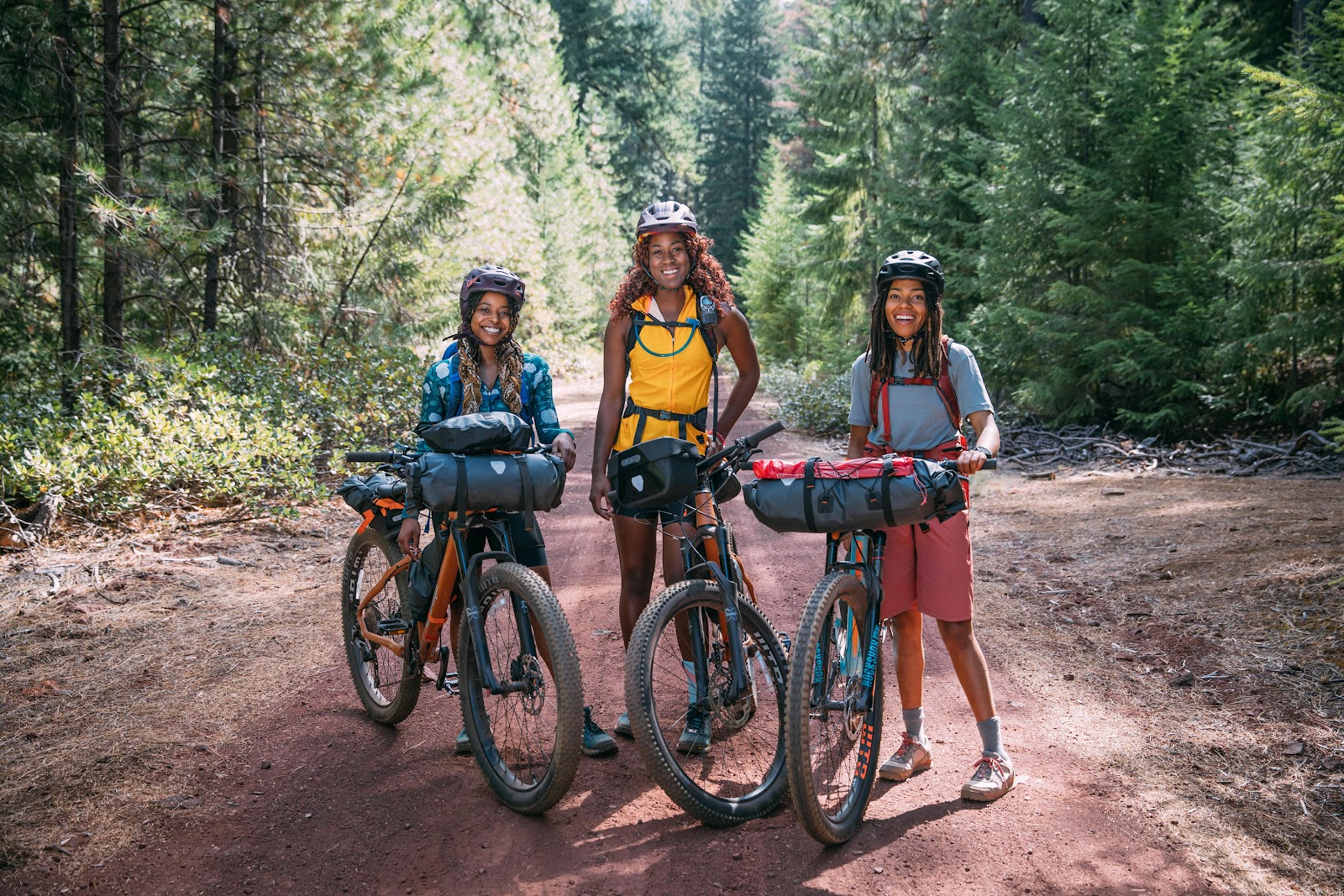 Cleopatra hopes that film will encourage more people to find their place in the outdoors. Aly Nicklas photo.

Do you have any other bike trips in the works?

AC: With the borders being it closed it makes it hard to do the things I had originally planned to do. If I can get to Oregon safely I would love to do some fall biking there. Besides that, I’m in Florida at the moment and am busy exploring our local trails. Swamp biking is a different beast. It’s really unique and beautiful.

From The Column: Women in the Mountains