The cost of city breaks for Britons to many of Europe’s most popular destinations has tumbled due to the coronavirus pandemic, a new report had revealed.

Post Office Travel Money’s annual City Costs Barometer found that prices in cities whose countries are currently on the UK government’s non-quarantine list are as much as 26 per cent lower than a year ago. Prices have also dropped by up to 26 per cent on pre-lockdown levels in early March.

The report revealed that the cheapest European destination for a city break is Lithuanian capital Vilnius, followed by Warsaw in Poland. At the other end of the scale, the Danish capital, Copenhagen is found to be the most expensive. 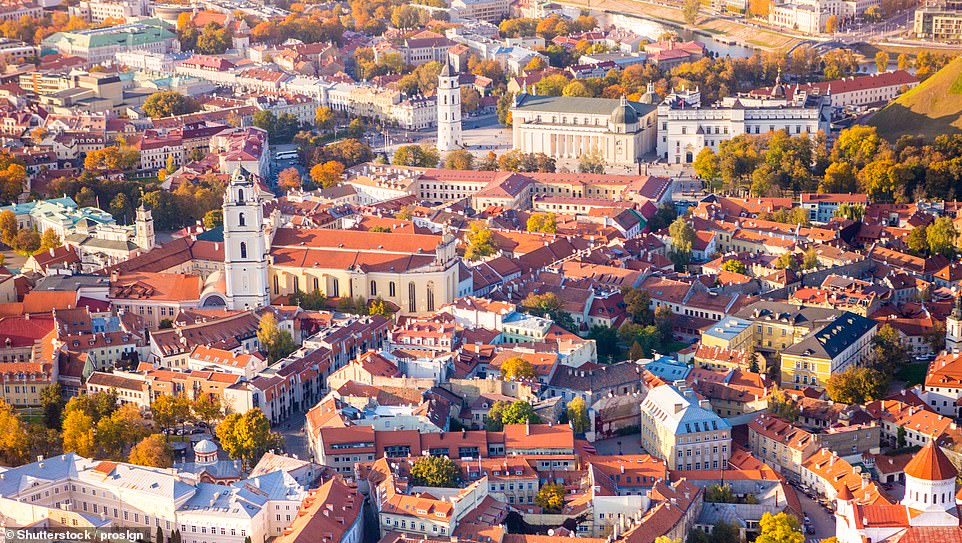 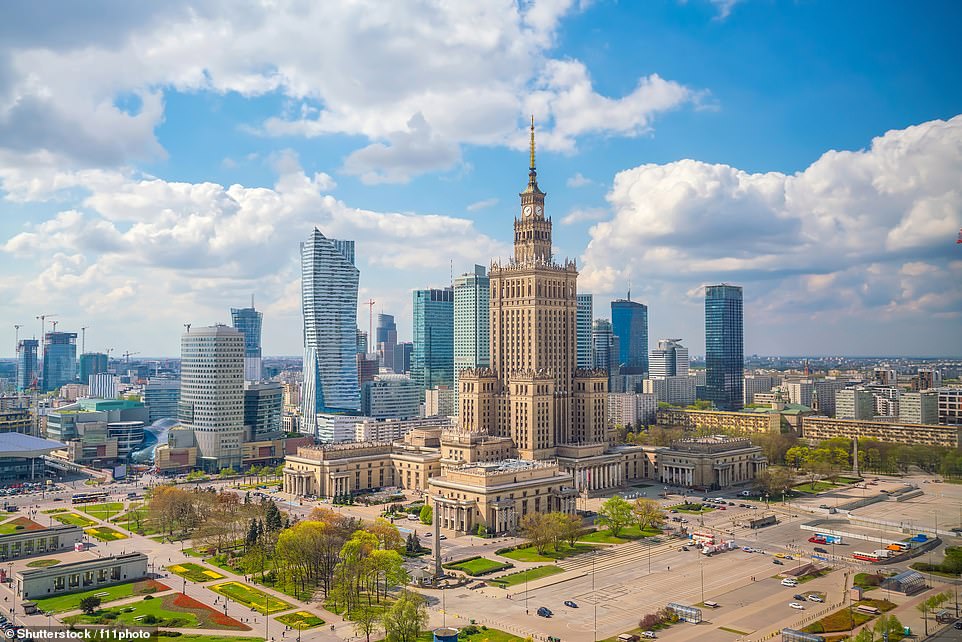 Warsaw, the Polish capital, is the second cheapest place for a city break for Britons, according to the Post Office analysis 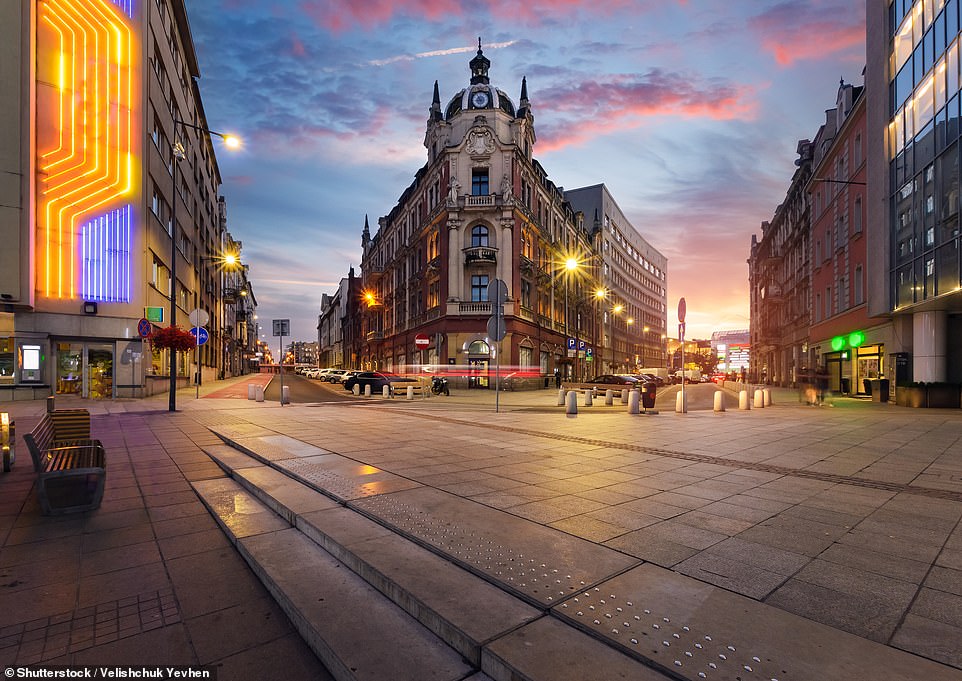 The Polish city of Katowice, an emerging city break destination is deemed to be the third cheapest place for Britons to take a city break

The City Costs Barometer reveals that prices are lower than a year ago in two-thirds of cities, with the biggest falls of almost 26 per cent in Reykjavik and Oslo. Barometer costs also fell significantly in Belfast (-23.7 per cent) and Dublin (-19.3 per cent).

The Post Office found that even more cities – 22 (92 per cent) of the 24 surveyed – saw falls in their barometer cost when prices researched in August for meals, drinks, city transport, sightseeing and accommodation were compared with those collected before lockdown in March.

A key factor in the price falls has been greater hotel availability, which has led to more competition and lower room rates. Only two cities (Athens and Katowice) registered rises in the average cost of two nights’ three-star accommodation compared with March.

By comparison, prices plunged over 20 per cent in 12 cities led by Dublin, Belfast and Rome. 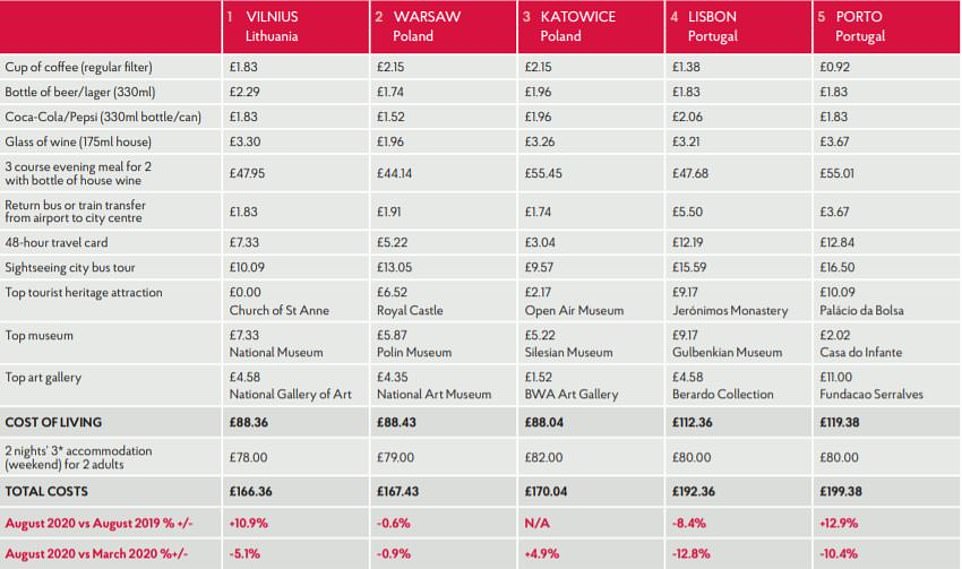 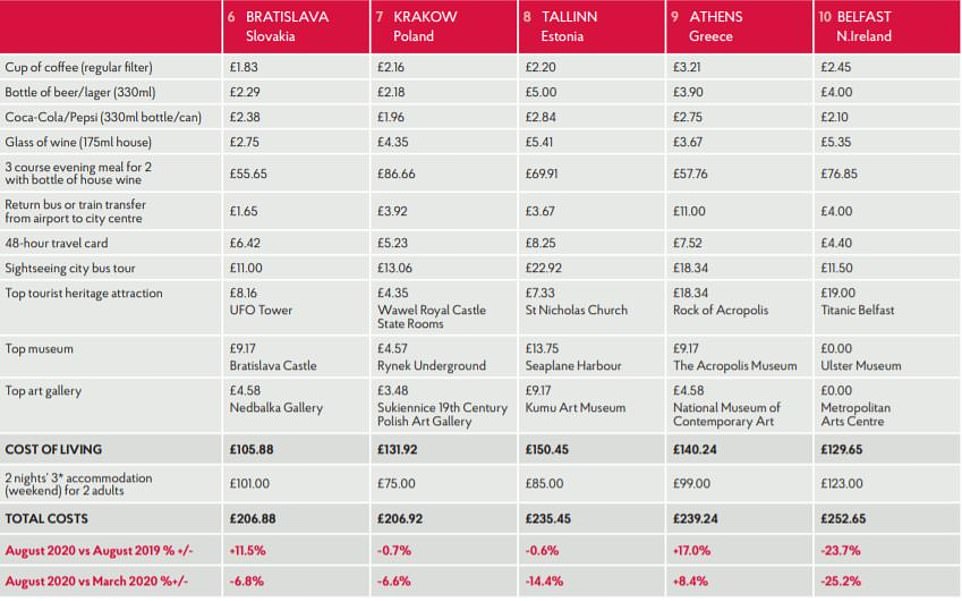 A table by the Post Office showing the costs of a city break in the 10 cheapest European destinations. All of the cities are in countries on the UK government’s non-quarantine list

Warsaw is one of three Polish cities to make the City Costs Barometer top 10. Krakow, previously a number one city in the barometer, is in seventh place with a barometer cost of £206.92, while Katowice, an emerging city break destination and new to the report this year, is in third place with a score of £170.04.

With Portugal newly added to the list of countries exempt from quarantine, Lisbon has re-entered the top 10 in fourth position (up from last year’s 14) with a year-on-year price fall of 8.4 per cent. Its barometer basket is now £192.36.

Portugal’s second city, Porto (£199.38), is just behind in fifth place, although prices have risen almost 13 per cent since last year.

Slovakia’s capital Bratislava (6th, £206.92) retains its top 10 place while Estonian capital Tallinn (£235.45) is in eighth place and one of several cities to see a fall in meal prices since lockdown. A drop of more than £20 in the cost of a meal for two helped it return to the top ten for the first time in five years. 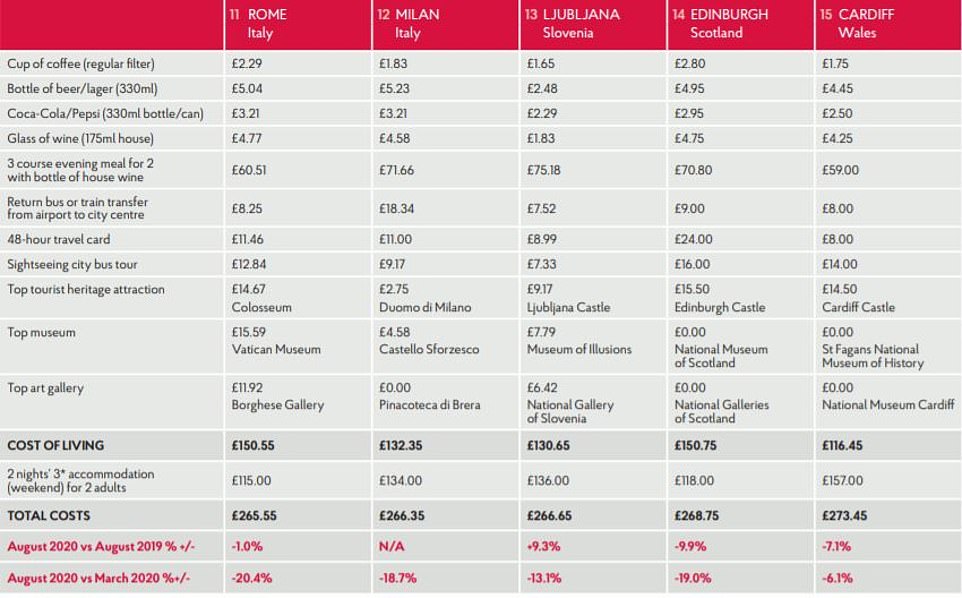 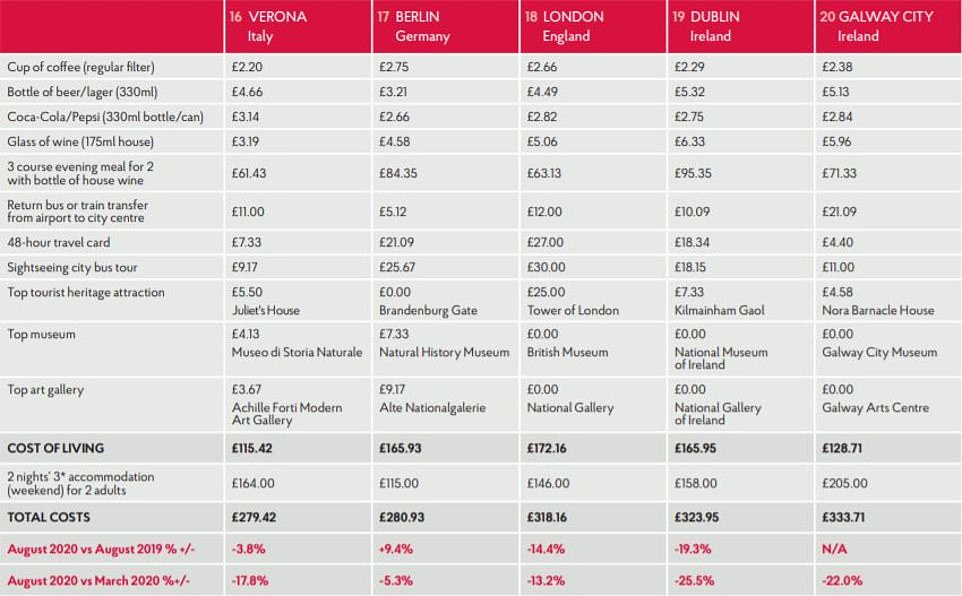 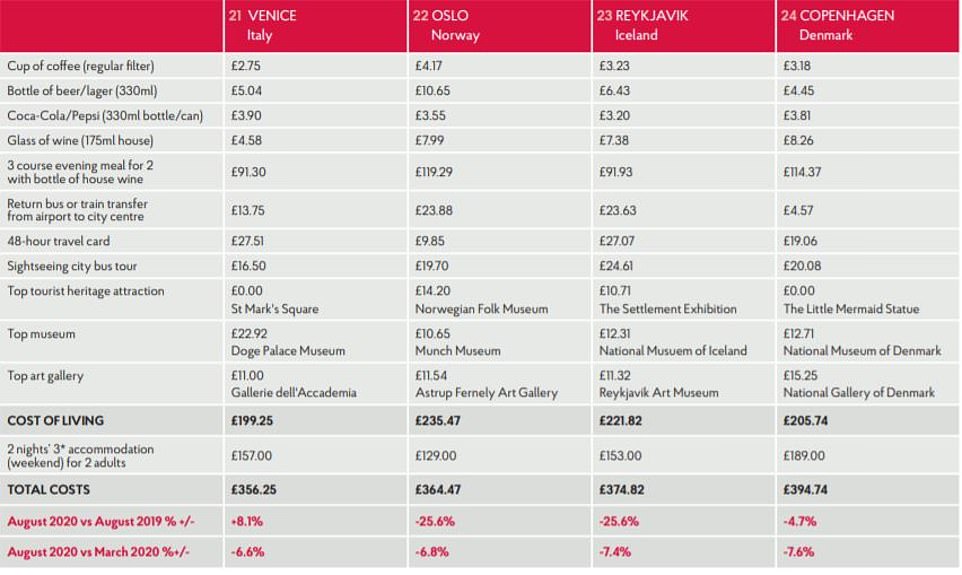 Athens (£239.24) is another Western European city returning to the top 10, this time in ninth place. The Greek capital would have taken a higher place were it not for a rise in hotel costs. At £99 for two nights’ accommodation, that cost has leapt over 16 per cent year-on-year in direct contrast with the majority of other cities.

Closer to home, Belfast completes the top 10 in 10th place with a total of £252.65 and was boosted by a sharp fall in hotel costs, thanks to greater availability.

Its barometer total has dropped almost 24 per cent since last summer and is 25 per cent lower than in March. 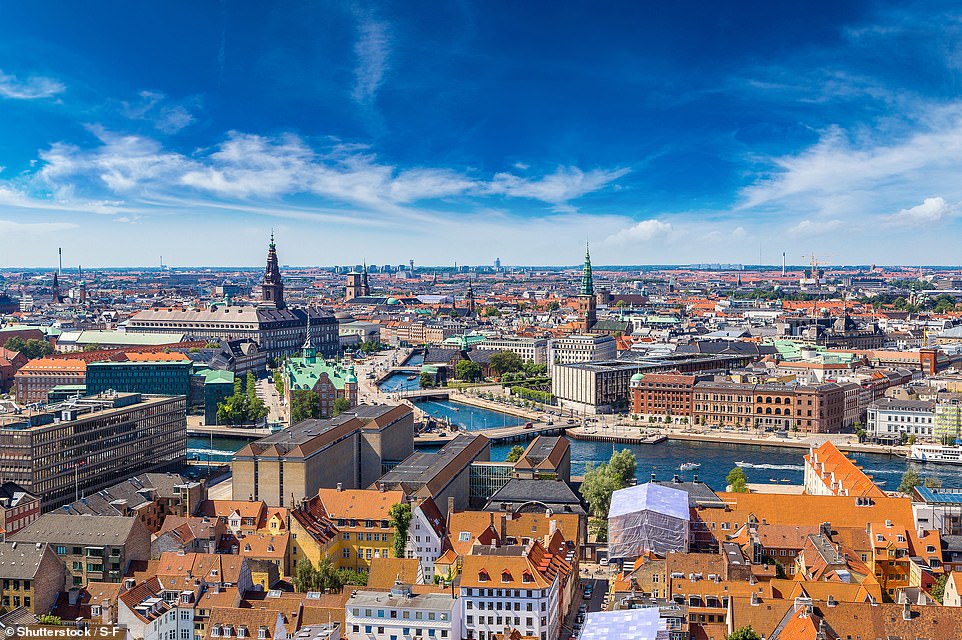 Out of the 24 cities analysed, the most expensive destination was deemed to be Danish capital, Copenhagen, pictured

Hotel prices are a key factor but another has been reduced admission to museums and galleries. Rome’s Borghese Gallery has lowered entry prices from £18.75 to £11.92, the Doge Palace Museum in Venice now charges under £23 compared with £28 pre-lockdown and in Milan, the Pinacoteca di Brera now offers free entry (was £14).

The barometer total for Copenhagen is £394.74 – more than twice as high as the top four cities in the report.

Nick Boden, head of Post Office Travel Money, which accounts for one-in-four UK currency transactions said: ‘This year’s report reveals that there is plenty of choice across Europe in cities that offer great value.

‘Prices compare very well with those a year ago, partly because sterling is stronger than in late summer 2019 but more notably because of the falls in hotel prices caused by greater availability after the Covid-19 lockdown.

‘We have chosen to feature only those cities currently excluded from quarantine restrictions but we urge people planning trips to watch FCO advice carefully before booking their holiday.’