Some prominent Minnesota Republican lawmakers are in quarantine and seeking COVID-19 tests at a critical juncture in the 2020 campaign after President Donald Trump tested positive for the virus Thursday, one day after holding a fundraiser and rally in the state. Republican Senate Majority Leader Paul Gazelka and House Minority […]

Some prominent Minnesota Republican lawmakers are in quarantine and seeking COVID-19 tests at a critical juncture in the 2020 campaign after President Donald Trump tested positive for the virus Thursday, one day after holding a fundraiser and rally in the state.

Republican Senate Majority Leader Paul Gazelka and House Minority Leader Kurt Daudt said they are both in quarantine after greeting Trump in the Twin Cities before his Duluth rally Wednesday night, which attracted 3,000 people.

“I am not currently experiencing any symptoms, but out of an abundance of caution I am being tested again on Friday for COVID-19 after testing negative on Tuesday ahead of the President’s visit,” Daudt, R-Crown, said in a statement. “I will remain in self-quarantine until results are received.”

On WCCO Radio on Friday, Gazelka said he and his wife are starting a quarantine at home and seeking a test. “I fully believe I will be fine,” he said.

The Minnesota Department of Health says that if exposure to someone who has tested positive doesn’t meet the medium-risk threshold of 15 minutes of exposure at a distance of 6 feet, quarantines can be voluntary and shorter than 14 days. But for those with closer exposure, they urge a full two weeks of quarantine, regardless of a negative test result.

Mike Lindell, the MyPillow founder and honorary chairman of Trump’s Minnesota campaign, spoke before Trump’s Duluth rally but said Friday that he had no contact with the president that day. Lindell added that he participated in an event Thursday with Vice President Mike Pence. Both for the Trump and Pence rallies, Lindell said he received COVID-19 tests, which came back negative.

Lindell also insisted, erroneously, that because he takes oleandrin, an extract of the oleander plant, he is inoculated against COVID-19.

Lindell’s claim has been roundly denied and condemned by medical experts.

Minnesota’s three Republican congressmen also traveled on Air Force One with Trump to and from the Duluth rally.

He noted that since he had not had close contact with the president for a sustained period he was advised by Congress’ Office of the Attending Physician to continue his official duties, such as voting on the House floor.

A spokeswoman for U.S. Senate candidate Jason Lewis, who shook hands with Trump on Wednesday, said Friday morning that Lewis “is feeling fine and displaying no symptoms, but out of an abundance of caution he has already begun the self-quarantine process and will be getting COVID-tested as soon as possible.”

Upon deplaning Air Force One on Wednesday at Minneapolis-St. Paul International Airport, Trump briefly visited with Gazelka, his wife, Maralee, Daudt and Lewis on the tarmac before walking over to a pen of supporters who were closely huddled together.

At one point Trump posed for a photo on the tarmac with Gazelka and his wife. None of them wore masks.

Executive orders issued by Gov. Tim Walz in the wake of the pandemic set a number of restrictions meant to curb the spread of COVID-19 at public gatherings such as campaign rallies.

The rules cap occupancy at public and private venues at 250 people, providing social distancing can be achieved, and require masks indoors.

Walz noted that he wrote a letter to both presidential campaigns in September urging them to comply with the state’s social-distancing and safety requirements as they hold events in Minnesota.

But he said Friday he does not plan to take additional action to curtail political events over the next four weeks.

“There’s a social compact that has to go with this,” he said. “Me saying it is a lot less effective than folks saying it’s not the right thing to do.”

Top state Republicans, including Daudt and Gazelka, have opposed those mandates, and GOP politicians and supporters routinely flout the rules at party-sanctioned campaign events. A spokeswoman for Gazelka said Friday that while he agrees the corona­virus is serious, the situation has not shifted his view that Walz’s emergency powers and related mandates should end.

The estimated attendance at Trump’s Duluth rally was more than 10 times the state limit. Supporters stood shoulder to shoulder, many eschewing masks.

The Minnesota Department of Health issued a statement Friday saying that “there is a potential risk that transmission occurred at the Duluth rally and other events associated with President Trump’s visit.” The agency added that community transmission of COVID-19 was high in St. Louis County before the rally, and attendees may have been infectious without realizing it.

Although Trump did not appear to come in close contact with the crowd, Duluth Mayor Emily Larson issued a statement Friday urging those who attended to quarantine and get tested.

Republican Party Chairwoman Jennifer Carnahan said that because of a busy campaign schedule, she was not in contact with Trump before the Duluth rally, and she did not attend a private fundraiser at the Lake Minnetonka home of Marty Davis, a prominent GOP donor and member of a wealthy Minnesota family with a number of businesses, including Cambria USA, the countertop maker.

Nearby resident Margaret Sughrue Carlson, CEO emeritus of the University of Minnesota Alumni Association, called on Davis to disclose the guest list. “Disclosing the guest list allows those with direct exposure, and the many more impacted indirectly, to get the testing and care they may need,” she said.

The Associated Press confirmed that among the guests was South Dakota Gov. Kristi Noem. But she was not in close contact with the president or anyone else who has tested positive, according to her spokesman.

Minnesota business executive Stanley Hubbard, a frequent GOP donor, said he skipped the fundraiser. “It’s foolish to go out with strangers right now. We don’t do it,” he said.

Carnahan said she understood that all guests at the fundraiser had to be tested beforehand in order to attend.

News broke late Thursday that Hope Hicks, a close aide to Trump, had been diagnosed with COVID-19 after experiencing symptoms during Trump’s Duluth rally. She was quarantined on the plane ride back to Washington, D.C. Trump tweeted early Friday that he and First Lady Melania Trump both tested positive.

Trump campaign manager Bill Stepien announced later Friday that all of the president’s campaign events are being moved to a virtual basis or postponed.

The development will sideline Trump for at least two weeks and could keep other Republicans in critical races from the campaign trail as Election Day approaches. State health officials say a 14-day quarantine is required regardless of test results if someone had a moderate exposure risk, which means spending 15 minutes within 6 feet of someone known to be infected.

“I think it’s unfortunate. You never want to see somebody test positive for COVID because there are still so many uncertainties,” Carnahan said.

But she said she wasn’t worried about the GOP campaigns.

“The campaign efforts and the strategy and the team’s direct voters contacts … and all the political efforts are still moving forward,” Carnahan said.

Sat Oct 3 , 2020
There has been a dramatic shift in consumer desire to get back on the road over the past few weeks, and advisors are key to providing the expertise that will give travelers the confidence needed to guide the industry to recovery. Those were the key and oft-repeated messages over the […] 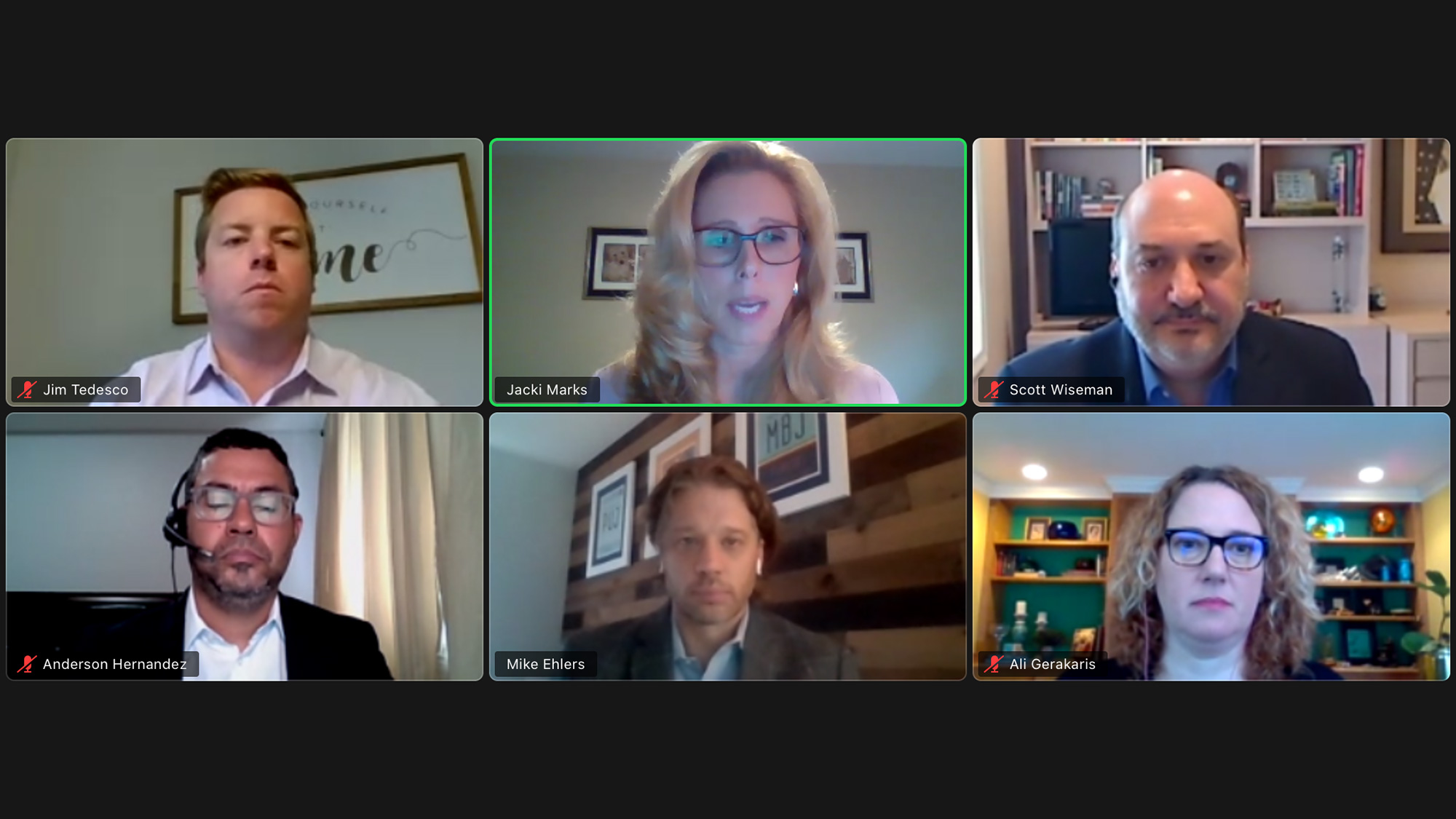