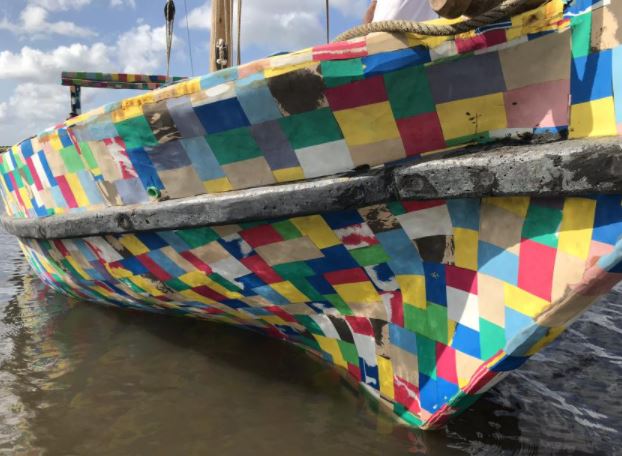 The Flipflopi, (pictured) a nine-meter-long boat made from 10,000 tons of plastic waste collected at beach clean-ups along the Kenyan coast, is set for a historic voyage across Lake Victoria to help create awareness on plastic waste management.

The trip, the boat’s second after making its first historic journey 18 months ago from Lamu, Kenya to Zanzibar, Tanzania, will also petition all East African Community member states to reach a regional consensus on banning non-essential single-use plastics.

Ali Skanda, co-founder of the Flipflopi project, said that the boat will stay in western Kenyan city of Kisumu for three months to allow local populations to have a look at it and change their way of disposing of plastics.

“The boat will then start sailing around Lake Victoria, starting from Kisumu, through Mfangano Island in western Kenya, into Uganda and finally to Tanzania, highlighting the impact of pollution on the vital Lake Victoria ecosystem,” Skanda said in Nairobi on Tuesday.

He said the boat was launched in September 2018 in Lamu to mark the clean-up day celebrations to raise awareness about plastic pollution, and to encourage a movement away from unsustainable plastic consumption practices.

Skanda said that, during the trip, the boat will be engaging governments, business leaders, community leaders, conservationists, and students on viable solutions for the pollution menace around Lake Victoria, Africa’s largest freshwater lake.

“Our hope is that this expedition will bring much-needed attention to action on the catastrophic pollution plaguing the most critical freshwater ecosystem in the region,” said Skanda.

He said that the world is tired and getting suffocated with the bad behavior of man that over time, has led to production and irresponsible usage of effluents.

“We intend to engage communities on traditional circular economy principles relating to both plastic and non-plastic pollutants through education and sharing of experiences and showcase local innovations,” said Skanda.

The expedition comes at a time when the lake, which spans three countries and home to more than 40 million people, has been under increased pressure from mismanaged waste and pollution that has severely impacted the health of communities and threatened its survival.

Juliette Biao Koudenoukpo, director and Africa regional representative at UN Environment Program (UNEP), said that the expedition to the lake is a simple but critical message to the attention of governments, local authorities, stakeholders and communities in the region to save the lake before it is too late.

“The destruction of this vital source of water means putting millions of peoples’ livelihoods at risk,” said Koudenoukpo.

She appealed for urgent action to reverse the environmental degradation that is having a grave impact on the lake and all those who rely on it for their livelihoods.

Koudenoukpo said that UNEP’s support of the expedition aims to galvanize change amongst governments, the public, the private sector, and civil society to beat plastic pollution.