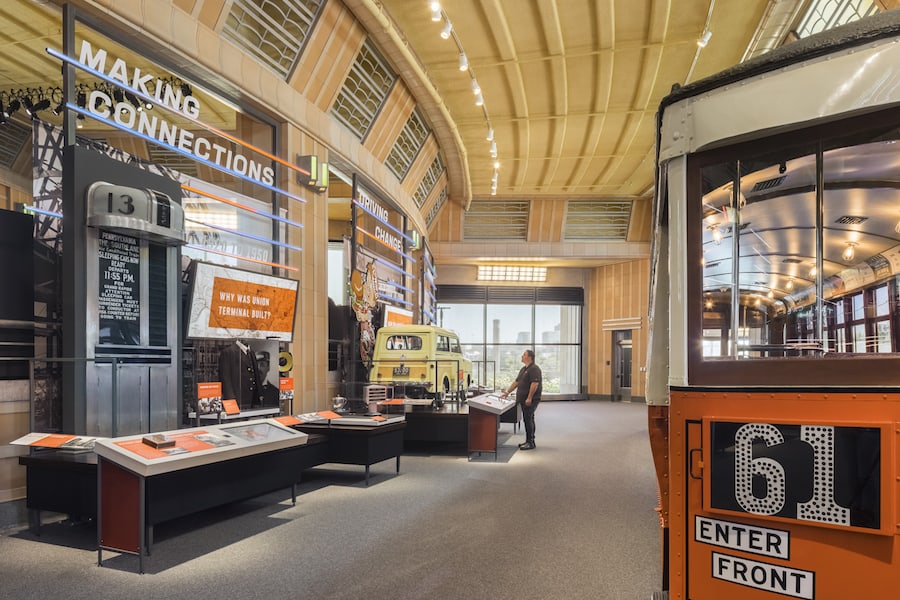 Roto is pleased to announce that Cincinnati Museum Center is now open to the public once more, featuring the Shaping Our City exhibit and the Neil Armstrong Space Exploration Gallery, presented by the Harold C. Schott Foundation.

As the museum’s design-build partner for this exhibit series, Roto brought multiple galleries to life over the past 24 months. Visitors to the CMC can now enjoy a range of new interactive exhibits. The Shaping Our City exhibit features immersive galleries that explore the history of transportation and can be found in the National Historic Landmark of Union Terminal, an art deco train station. This installation uses the original features of the building to add context to the displays of authentic objects, such as old cars and trolleys.

The exhibit simultaneously honours the city’s past while looking ahead to the future, focusing on Cincinnati’s urban development, from infrastructure and transit to the built environment. Roto was responsible for the design, engineering, interactive media, fabrication and installation.

Shaping Our City shows how the city expanded out of the river basin between 1860 and 1920, leading to the introduction of streetcars to climb the hilly streets. Visitors can see CMC’s orange streetcar,  alongside video and audio that brings to life three different Cincinnati streetcar trips in the 1910s, 30s and 40s.

The exhibition also looks at the centralisation of the city’s transit system and the building of Union Ternimal itself the first half of the 20th century. In addition to this, the exhibition features a vintage Crosley Super Station Wagon as well as photos from CMC’s Kenyon Barr collection. These show how car culture has changed the landscape of the city, including through the construction of highway I-75.

Finally, Shaping Our City makes visitors think about the future as transportation continues to evolve, from autonomous vehicles to scooters, bike shares and rideshares.

Roto has been CMC’s preferred design-build partner for multiple projects, including the Science Interactives Gallery which opened in March 2019, and Cincinnati in Motion and the Neil Armstrong Space Exploration Gallery, which both opened this summer.

Earlier this year, Roto and tvsdesign announced major milestones in the planning of the new Mote Science Education Aquarium at Nathan Benderson Park in Sarasota, Florida.